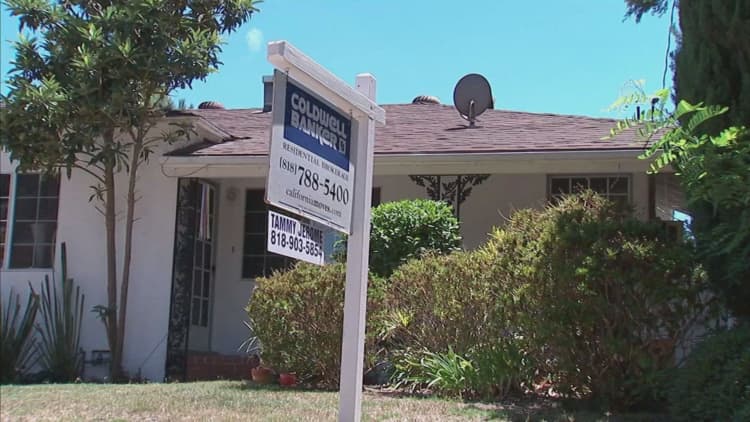 Home prices are heating up again, and incomes are not catching up, because even though household incomes jumped sizeably last year, home prices rose far faster.

The result: One in four housing markets is now less affordable than its long-term historical norm and 63 percent of U.S. counties are seeing home affordability worsen compared to a year ago, according to ATTOM Data Solutions.

"Last quarter we did see signs that wage growth was kicking in and getting stronger, but the latest round of wage data at the county level is showing that trend reverse. That worsened affordability in many markets," said Daren Blomquist, senior vice president at ATTOM, which determines affordability based on the percentage of average wages needed to make monthly house payments on a median-priced home with a 30-year fixed rate and a 3 percent down payment — including property taxes and insurance.

While housing markets on the coasts continue to be most expensive, the drop in affordability is now most pronounced in markets like Houston, Dallas and Denver.

"Some silver lining in this report is that affordability actually improved in some of the highest-priced markets (like San Francisco) that have been bastions of bad affordability, mostly the result of annual home price appreciation slowing to low single-digit percentages in those markets," said Blomquist. "This is an indication that home prices are finally responding to affordability constraints — a modicum of good news for prospective buyers who have been priced out of those high-priced markets."

A housing development under contruction in Denver, Colorado.
Getty Images

The price gains may be slowing in these markets, but that doesn't mean more homes are available for sale. San Francisco is cooling slightly, but finding a good home to buy there at an affordable price is not easier. Prices are softening because there are simply fewer buyers competing.

Some surprising markets are cropping up on the list of less affordable: Nashville, Grand Rapids, St. Louis, even Detroit. While home prices in these cities are comparatively low to the rest of the nation, the number of people who can afford them, based on income, is shrinking.

And it's not just the plight of the first-time buyers. While this young cohort has gotten a lot of attention for being absent in the housing recovery, new evidence shows that move-up buyers are the ones really stalling the sales.

"Traditionally, borrowers could afford the higher payments on the larger mortgage because their incomes were rising. But falling home prices during the financial crisis have eroded this equity, and most homes are worth less than their 2007 peak: Home values nationwide must still increase by 6.5 percent to reach peak values. Real incomes have been flat since the mid-1990s, and credit standards are tight, further limiting trade-up activity," wrote researchers Laurie Goodman, Sheryl Pardo and Bing Bai of the Urban Institute.

Near record-low mortgage rates have likely contributed to the froth in home prices. They give buyers more purchasing power, which, in turn, allows sellers to raise prices. Rates have barely moved this year, hovering in a tight range; they are unlikely to move demonstrably higher any time soon, a phenomenon which could have thrown some cold water on prices and, ironically, helped affordability.