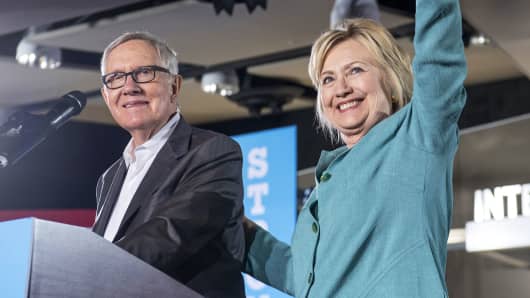 Hillary Clinton and Donald Trump have both had their share of withering controversies during this election season. But the difference is that when Clinton gets ensnared in some kind of scandal or bad publicity, elected and established Democrats rush to her aid. And when Trump gets into trouble, the elected and established Republicans run away from him. The reason for this dichotomy is simple: Establishment Democrats have a lot vested in a Clinton victory, and establishment Republicans have almost nothing to gain if Trump wins.

The clearest two examples of this trend are the way the Republicans responded to the "Access Hollywood" tape catching Trump's vulgar comments about women and the way Democrats now are responding to the FBI's revelation of a new batch of emails in the Clinton email investigation.

When the "Access Hollywood" tape surfaced, not only did some top Republicans quickly denounce Trump, some rescinded their endorsements for him. But since the new Clinton/FBI news broke on Friday, Democrats have responded in lock step behind Clinton. Many of them are now directly attacking the FBI and Director James Comey, who made the announcement. The sharpest of those attacks comes from Nevada Senator Harry Reid, who published a letter accusing Comey of attempting to influence the election and therefore breaking the law (federal officials are prohibited by the Hatch Act from engaging in political activity). Reid went even further in the letter, claiming that the FBI "possesses explosive information about close ties and coordination between Donald Trump, his top advisors, and the Russian government."

The attack-dog tone of this letter is a product of the fact that establishment Democrats need a Clinton victory to keep their existing power via the White House. Sure, the Democrats would also like to gain control of the House and Senate. But that's not as important as protecting a cozy political status quo that favors them in the federal bureaucracy controlled by the president. The Democrats have enjoyed a lot of new political capital during the Obama years, and losing that is not an option. And besides, they're used to defending the Clintons from all kinds of controversies. Hillary and Bill Clinton have been the focus of serious legal investigations for a quarter century. Almost every elected Democrat has defended them in the past and the Clintons are still standing anyway.

And guess what? Established Republicans have the exact same motivation when it comes to protecting their cozy political status quo. Except their goals are clearly the opposite. For people like Paul Ryan and Mitch McConnell, what exactly is the upside for them if Trump wins the White House? At best, they get to play second fiddle to a new top dog Republican in Washington and the world. At worst, they get to absorb every negative controversy and problem Trump endures as if it were their own. Sometimes, unity comes with a lot more punishment than reward.

"In that sense, Trump represents the very unique picture of a candidate that threatens the establishment in both major political parties. And in this bizarro world election, that image has actually helped him grab the support of the growing number of Americans who want real change in Washington."

This is a complete flip on the way things used to be in politics. It used to be the Democrats who never seemed to form enough of a united front in presidential elections or even in big congressional battles. During his time in the White House, it seemed like President Ronald Reagan never had much trouble getting his political agenda through Congress even though the GOP never controlled both houses on Capitol Hill for one day of Reagan's two terms. During the 1972, 1976, 1980, and 1984 presidential elections, Democrats seemed to be fighting themselves a lot more than the Republican candidates on the other side.

What happened? 1994 happened. That's when the GOP won control of Congress for the first time since the 1950s. Suddenly, the Republicans had a lot more leaders in Washington vying for attention. And also, many of those new congressional leaders started to enjoy the comfort of the non-term limited power on Capitol Hill. They essentially became just like the Democrats were during their 40-plus years in congressional power. But then came 2006, when President George W. Bush's Iraq war problems lost the Republicans control of both the House and the Senate in an historic midterm election defeat. That's the scenario the GOP leaders don't want to happen again. For them, losing the White House again wouldn't be as bad.

In that sense, Trump represents the very unique picture of a candidate that threatens the establishment in both major political parties. And in this bizarro world election, that image has actually helped him grab the support of the growing number of Americans who want real change in Washington. The Bernie Sanders movement proved that sentiment is rising on both sides of the political aisle.

Trump can't win over the establishment of his own party, let alone the Democrats. But for the millions of voters who think change can only come from someone the Washington establishment truly despises, Trump is that guy. At least he's that guy when it comes to being despised in Washington. The only polls that have been consistent in America over the past several years are the ones that show a vast majority of us believe the country is on the wrong track. Capitalizing on that sentiment has always been Trump's only way to win. It was certainly the reason he won all those GOP primaries. Is he actually worthy of that "change-maker" image and will he actually deliver change if he's elected? There is really no way to tell.