Trump is right to ditch TPP. Here's why WTO should go next. 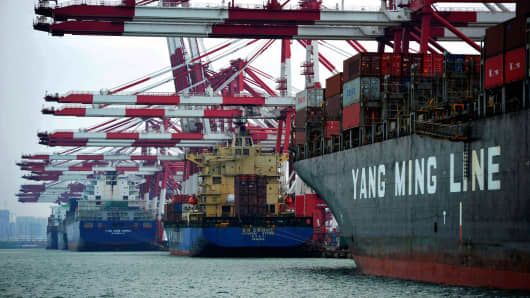 President-elect Donald Trump faces heavy pressure from the establishment to abandon his campaign promises on trade policy. His announcement on Monday saying that he would pull out of President Obama's Trans-Pacific Partnership (TPP) on his first day in office shows that he's not giving in – and for the sake of a healthy economy he must stand his ground.

Tune into Worldwide Exchange on Wednesday Nov. 23 at 5:15 am when Alan Tonelson will make a guest appearance.

Trade supporters are employing arguments that have repulsed challengers for decades, at least in the halls of government: that the string of deals and similar policies starting with the North American Free Trade Agreement (NAFTA) has opened invaluable markets to American businesses and workers and fueled production and employment; that fending off even predatory foreign competition with tariffs and other restrictions would spark disastrous global trade wars, a worldwide recession – or maybe worse; that such curbs would mainly raise prices for American consumers, especially at the lower and middle income rungs; and that ever accelerating automation will prevent the return of prized manufacturing jobs lost to imports or offshoring. But none has ever survived serious scrutiny.

Far from adding to domestic output, America's trade flows have dragged on economic performance for decades. According to the standard method for measuring the economy's size and expansion or shrinkage, the kinds of rising trade deficits the nation has run since the 1970s subtract from growth. When Americans were counting on other engines of economic advance – ranging from healthily growing domestic demand to bubbles in stocks or technology or housing – trade's growth drag seemed unimportant. These days, amid the slowest U.S. recovery on record, it's completely unaffordable.

Moreover, Washington clearly deserves most of the blame. Since the last recession ended in mid-2009, the growth of the trade deficit heavily affected by current trade agreements and similar policies, in goods other than oil, has slowed the current expansion in inflation-adjusted terms by more than 16 percent – or more than $377 billion, according to my calculations using government data. Worse, nearly all these losses have come in the private sector, the economy's leader in productivity and innovation.

The major reason for the Made in Washington trade deficit's expansion also explains why trade war worries are far-fetched: Most other leading economies depend heavily on selling to Americans and amassing trade surpluses to grow adequately. When American leaders have expanded trade with these determinedly mercantile powers, they inevitably opened their markets less than America, whatever their paper promises. Trade imbalances inevitably widened. A Trump policy overhaul may spark some short-term spats, but these foreign governments will soon recognize the folly of assaulting a crucial customer.

"A new America First trade policy will foster better quality U.S. growth – based mainly on investing and producing rather than on the borrowing and spending that inflated the previous decade's bubbles."

Although using tariffs to replace domestic goods and services with counterparts from much lower cost third world countries like China could indeed raise American consumer prices, the impact would be softened over time by the upward wage pressures created by the need for more U.S. workers to supply those products. Just as important, prices could be further contained by stepping up anti-trust enforcement in America. As the Obama administration reported last spring, U.S. business concentration has increased markedly since the late 1990s – which typically enables monopolies and oligopolies to charge more. Rather than focus on maximizing the benefits of competition by encouraging more from abroad, why not focus on restoring it at home, which would keep most gains state-side?

As for the pessimism regarding manufacturing jobs, automation unquestionably has enabled the sector produce more with fewer employees. It's also true that the high cost, extensively regulated United States will struggle to become competitive in labor-intensive goods like apparel and toys. But much of the nation's trade deficit is in high value manufacturing - such as semiconductors, construction equipment and pharmaceuticals – which still employs millions of workers and where American capabilities remain strong. Because of the leverage created by the massive U.S. market, new trade carrots and sticks hold great promise of luring output and employment back home.

What would they look like? Many would simply mimic measures successfully used by governments around the world to accomplish these aims. For instance, the Buy America regulations governing federal civilian and military purchasing already require imports to contain certain levels of American-made parts and components. These requirements should be considerably higher, and enforcement greatly improved. Similar mandates could be imposed on incoming foreign investment in factories, along with a mandate to export more than they import and to transfer key technologies to American partners.

An enormous and pervasive trade distortion could be corrected through a border adjustment tax on imports from countries that use Value Added Taxes – i.e., nearly all countries. These levies in effect penalize U.S. goods seeking overseas customers and subsidize foreign goods destined for America. Some estimates judge that this policy discrepancy generates about half of the U.S. trade deficit.

To carry out much of this program legally, the U.S withdrawal from the World Trade Organization is necessary. Without its fetters on unilateral action, Washington could also aggressively use its own trade laws to fight individual cases of foreign mercantilism. Bilateral deals that have clearly failed would need to be scrapped as well (such as the March, 2012 agreement with Korea) and agreements like NAFTA should be rewritten to realize their full potential (in this case, to keep more output and jobs inside North America).

New trade deals on top of a restructured NAFTA could help reduce trade deficits and boost domestic production as well, but America's negotiating strategy needs an overhaul. Detailed talks seeking to tear down long lists of foreign trade barriers and even transform protectionist foreign economies into something substantially freer should be recognized as a mug's game. History teaches that these ambitions are too easily foiled by powerful, secretive foreign bureaucracies and the same combination of daunting logistical obstacles and official hubris that have foiled nation-building efforts.

Instead, Washington should announce that all foreign trade ties will be based on the principle of full reciprocity, and that the United States will be judge, jury, and court of appeals in determining whether American exports have gained adequate market access – and therefore whether imports will receive similar opportunities.

A new America First trade policy along these lines will foster not only more but better quality U.S. growth – based mainly on investing and producing rather than on the borrowing and spending that inflated the previous decade's bubbles. Moreover, shrinking the trade deficit will quicken the recovery without a single dollar of debt-fueling tax cuts or government spending. Keeping his word on trade, in other words, will prove a combination of good politics and good economics that Mr. Trump will find hard to beat.

Commentary by Alan Tonelson, the founder of the public policy blog RealityChek and author of "The Race to the Bottom" (Westview Press, 2002). Follow him on Twitter at @AlanTonelson.