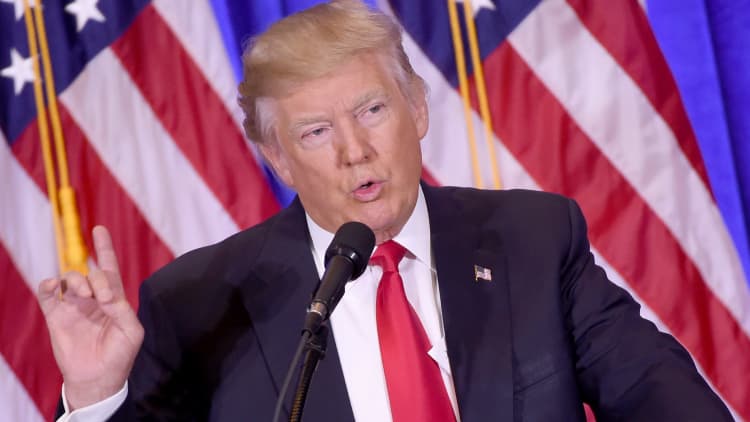 watch now
VIDEO0:4300:43
Trump: We have a movement the world hasn't seen before
Squawk Alley

Donald Trump faced a wide-ranging press conference Wednesday for the first time since July amid the latest reports about possible ties to Russia and lingering questions about his business holdings.

Here are some of the most riveting moments from the event:

'I think' hack was Russia, but others do it, too

Trump plans to hand off his businesses to his sons, but will not fully divest

At the Trump Tower lobby in New York, Trump addressed suspected Russian interference in the U.S. election, his plan to reduce conflicts of interest during his presidency, and his health care and immigration policy.

Trump on Wednesday claimed he has "nothing to do with Russia" and argued that he is the victim of political attacks after reports that intelligence officials possessed briefing material with damaging accusations about ties to Moscow. On Twitter, Trump called the reports "unfair" and said, "Russia has never tried to use leverage over me." Trump claimed that he has "no deals, no loans, no nothing" with Russia, an assertion that is difficult to verify because he has not released his tax returns, unlike every president since Jimmy Carter.

The FBI is not actively investigating the information, which was initially circulated among Trump opponents and has not been verified by intelligence agencies, two U.S. officials told NBC News. Those sources did not comment to NBC about the nature of the allegations.

Trump will hand control of his business to his two eldest sons, but will not fully divest or create a blind trust, as the Office of Government Ethics and former White House ethics lawyers have called for him to do. A lawyer advising Trump on ethics issues claimed that it would be too difficult and could create even more conflicts.

The OGE and experts have called on Trump to sell his assets and let an independent trustee manage them, following past presidential precedent. This would reduce the possibility that he and his family could use the office to benefit themselves financially.

Trump has correctly noted that the president is exempt from criminal conflict of interest laws and said his two eldest sons will manage his businesses with other executives. The OGE has said that move will not go far enough to reduce potential conflicts.