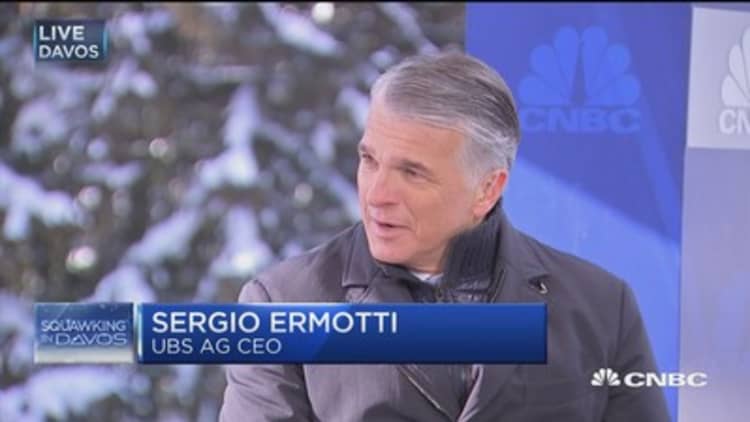 Inequality levels in Europe have been accelerated as a result of historically low-interest rates, according to the chief executive of UBS.

The European Central Bank (ECB) opted to cut interest rates in the euro zone to zero percent in March 2016 and has pumped more than a trillion euros into the economy through its bond-buying program.

"I think if the collateral damage of low (interest) rates or negative rates would only affect banks, it would be okay..." Sergio Ermotti, UBS chief executive, told CNBC on Tuesday in Davos, Switzerland.

"But it is starting to affect savings, most pension fund systems, insurance companies and the confidence of people who have been saving money thinking that they can leave a little bit out of their income to continue to prosper. It is creating this sense of inequality that goes on in Europe," Ermotti added.

Ermotti also bemoaned the concept of a United States as Europe appeared, he argued, to be becoming more divided. Elections are due to take place in the Netherlands, France, Germany and Italy throughout 2017 with political uncertainty likely to significantly impact the financial markets.

"We are happy to see that post-elections (in the U.S), we see both people that supported (President-elect Donald) Trump and people that were supporting (Hillary) Clinton becoming more positive about the economic outlook and being willing to consider investments going forward. Now, we need to see them translating that desire into reality," Ermotti said.

Trump had attacked the financial community throughout his election campaign. However, the prospect of deregulation of the banking sector has boosted global stock markets. Trump is due to be inaugurated as President of the U.S. on Friday.

India is a true bright spot in the midst of a global downturn, top execs and policymakers say
Jenni Reid
Belarus' exiled opposition leader says trial has 'nothing to do with justice'
Karen Gilchrist
'I wouldn’t change my past if you gave me a trillion dollars,' will.i.am says on his humble beginnings
Sophie Kiderlin
Read More