After mostly positive results from Wall Street, investors turn their attention to the first wave of tech reports, which include Netflix on Wednesday and Skyworks Solutions on Thursday.

Due to the nature of earnings season, and technology companies more specifically, a single news report, product launch or even rumor can cause extreme movement in estimate activity.

Heavy upward revisions in the months and weeks leading up to a report tend to indicate a positive outlook for the company and could mean a pop in the stock. Following a strong third quarter, estimates for Netflix and Skyworks edged higher for the fourth quarter.

Netflix gained momentum over the past three months after catching Wall Street by surprise with a better than expected third quarter. The video streaming service posted earnings of 12 cents per share on $2.29 billion in revenue, topping the bullish Estimize consensus on both the top and bottom line.

Looking at the fourth quarter, Netflix expects to add an additional 5.2 million members — 1.45 million in the U.S. and 3.75 million international. This compares favorably to the Factset forecast of 1.44 million new domestic subscriptions and 3.73 internationally.

A large portion of the ongoing membership growth continues to come from new original content. Netflix's most recent series "The Crown" ran away with the Golden Globes, winning three awards and most notably best television drama series. Netflix plans to increase original programming hours to 1,000 in 2017 to appeal to a wider audience.

Despite a slew of positive initiatives in the works, Netflix faces intense pressure from Amazon, which appears to be rapidly expanding its Instant Video service, as well as Apple's recent push into original programming. The vast amount of resources at Amazon and Apple's fingertips gives both companies the freedom to make a serious push at Netflix in a relatively riskless manner.

Nonetheless, fourth quarter earnings estimates look promising. Analysts are calling for earnings of 15 cents per share on $2.47 billion in revenue, according to the Estimize consensus data. Earnings estimates were revised higher by 41 percent since its most recent report three months ago. In that time the stock increased 30 percent, reflecting a favorable outlook for 2017. 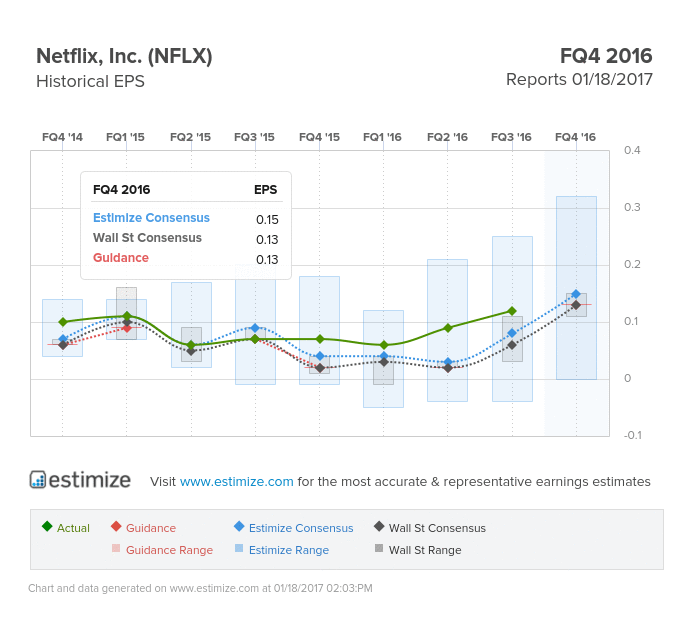 Estimate activity for semiconductor manufacturer Skyworks Solutions has ramped up lately on breakthroughs in new markets like the Internet of Things and expanding presence in traditional mobile markets.

The move to Internet of Things along with partnerships with Chinese smartphone maker Xiaomi diminishes the company's reliance on Apple and Samsung. Its latest IoT application released last week provides an additional layer of support to a leg of the company that now makes up about 25 percent of total revenue.

For the fourth quarter, analysts at Estimize are calling for earnings of $1.60 per share, nearly flat from a year earlier. That estimate trudged higher by about 5 percent in the past three months, despite reports of weak iPhone 7 sales. Revenue for the period is expected to decrease by 3 percent to $905.87 million, reflecting a slight improvement in comps from the previous 2 quarters. 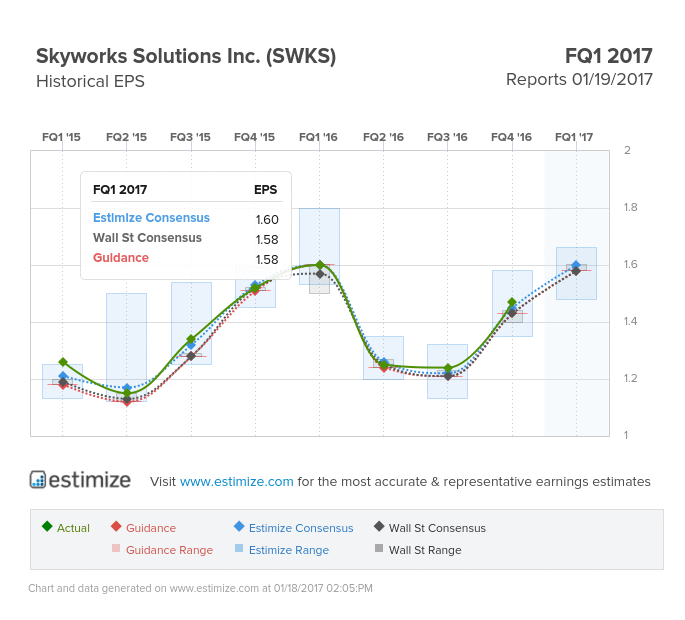 Earnings season kicked off on a good note, but that doesn't mean every company will emerge victorious. Concentrating on estimate revisions activity is a great way to pinpoint potential winners and avoid losers in upcoming reports.

How do you think these names will report? Be included in the Estimize consensus by contributing your estimates here.