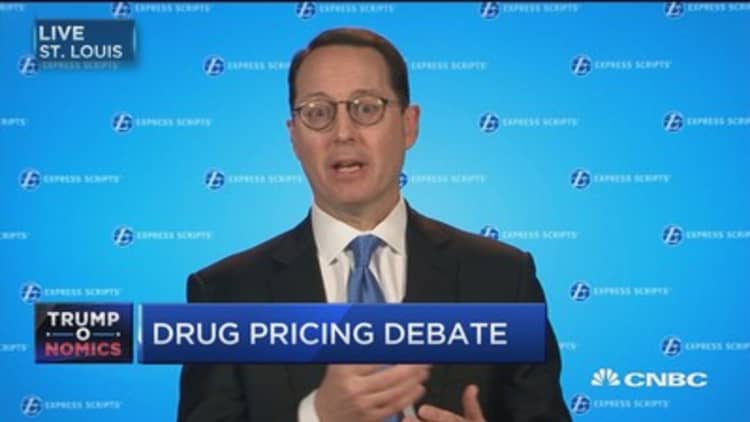 Drug prices, on their face, rose by about 11 percent last year, according to Express Scripts, the largest U.S. pharmacy benefits manager.

The St. Louis-based PBM, which negotiates drug prices on behalf of insurers and employers, hailed the difference in figures as evidence that it saves the system money.

"In a year where the issue of high drug prices was No. 1 on the list of payer and policymaker concerns, the data show that our solutions protected our clients and patients," Dr. Glen Stettin, chief innovation officer at Express Scripts, said in a statement.

But drug companies, growing increasingly public in their battle with PBMs, may use the same figures to fuel their arguments that the middlemen help push list prices up.

Drug manufacturers say it's the rebates, or discounts, wrangled by PBMs that drive list prices higher; PBMs take a percentage of the rebates, the rest of which they pass on to clients. So the bigger the rebate, the more PBMs take home.

It's a debate that gained steam last summer, when Mylan CEO Heather Bresch pointed her finger at PBMs and other members of the health-care system as a reason for the skyrocketing price of her company's EpiPen epinephrine auto-injector.

"Two. Point. Five. Percent," Evercore ISI's Mark Schoenebaum wrote in an email to clients. "I understand that the pharma/biotech industry is an easy political target. But the facts aren't really so offensive."

It's a narrative Express Scripts, and other PBMs, reject.

"Rebates do not raise drug prices, drugmakers do," Express Scripts' Stettin said in the statement Monday.

Indeed, Ross Muken, who covers pharmacy benefits managers for Evercore ISI, took the opposite side from his colleague in a note Monday.

"We view this year's iteration of the drug trend report to be a base of defense against the recent uptick in Pharma lobby noise," Muken wrote. Still, he conceded, "The reality is that while many of the main causes of inflation are certainly the responsibility of the pharma industry, the supply chain has none the less benefited in many instances."

The average list price for a brand drug last year was $307.86, more than triple what it was in 2008, Express Scripts said in its report. It compared that with price inflation for common household items during that same period, of 14 percent.

The debate over drug prices is nothing new, but it snowballed leading into the 2016 U.S. presidential election. President Donald Trump, in his first news conference, said the pharmaceutical industry was "getting away with murder" in its pricing practices.

In a meeting last week with several pharma CEOs, Trump praised the industry for its contributions to human health, while still saying prices need to come down.

Some drug companies have made commitments to limit price increases, Allergan most publicly with a "social contract" promising to limit increases to less than 10 percent annually.

Drugmakers made a similar pledge in 1993 under scrutiny from President Bill Clinton, vowing to keep increases on average in line with inflation.

The consumer price index rose 2.1 percent for the 12 months ended in December, according to the U.S. Bureau of Labor Statistics.