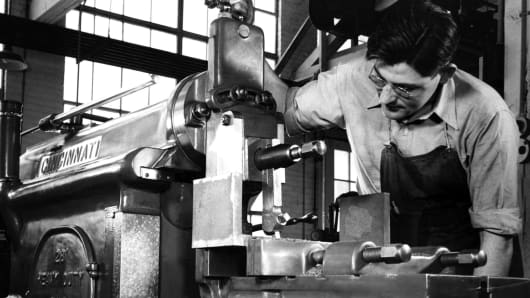 In 1994, when I was 13, my dad got our family's first cell phone. It was one of those brick-sized Motorolas, and it was incredibly expensive, even by today's standards. Making a call on that phone also cost a fortune—I learned that the hard way when I made a long-distance call to a girl and was sentenced by my dad to three months of hard labor as punishment.

Now, more than twenty years later, I use an iPhone (which is still cheap compared to my dad's Motorola) to video chat with Pierre, my friend and client from Belgium.

It's no coincidence that the information economy exploded at the same time the world opened to free trade. Complex supply chains made technology and communication cheaper, and created a world where workers and companies that exist in the knowledge and information economy—like me—can tap into a global market for their goods and services.

Of course, another effect of cheap technology, complex supply chains, and globalization has been a reduction in America's manufacturing workforce. 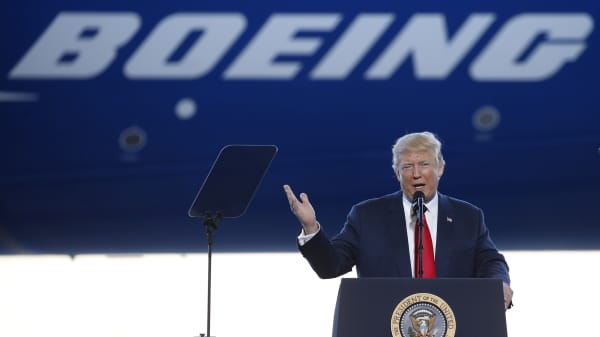 Donald Trump made the pain of America's manufacturing workforce a centerpiece of his campaign.

In fact, Trump explicitly told us he is going to bring back an America-first manufacturing-based economy.

That's not going to happen.

Things have changed. The economy Trump promises we will return to—one financed by tariffs and guarded by walls—was not an information-based economy.

Walls and tariffs can change where we manufacture our cars and appliances, but you can't build walls and enact tariffs to keep knowledge and information out.

If Trump succeeds in bringing American manufacturing back to the pre-globalization world, he will create a different type of economic inequality—an inequality based on some workers existing in a modern, globalized economy, while others exist in an economy trying to recreate the 1950s.

In other words, the Goldman Sachs team advising Trump will still have access to global markets, while the blue-collar workers who fervently believe Trump can recreate a different era will suffer.

"Manufacturers might re-shore or choose to keep some operations in America, but a large number of jobs for Trump's blue-collar base won't be a part of that equation. What that blue-collar base will get from Trump's protectionist approach is higher prices on consumer goods and food."

I've worked with manufacturers in the plastics and rubber industries, and I can tell you the relentless drive toward automation in manufacturing is real. That's happening because robots are cheaper in the long run, and because America's manufacturers have a tough time filling jobs. And in an economy nearing full employment, manufacturers that can't fill jobs have no choice but to automate.

Manufacturers might re-shore or choose to keep some operations in America, but a large number of jobs for Trump's blue-collar base won't be a part of that equation. What that blue-collar base will get from Trump's protectionist approach is higher prices on consumer goods and food.

And an open world has more than just economic benefits.

Even if my client in Belgium and I weren't doing business together, my life has been enriched just by knowing him. Pierre was born in Africa, was adopted by a French family, and has lived all over Europe. I was born in Washington state, and the most cosmopolitan place I've ever lived is Phoenix.

(You read that correctly—I'm a lifelong resident of red state America.)

I would have never known someone like Pierre in an economy based on walls and tariffs—but of course, the main benefit of globalization, cheap technology, and the information age isn't having friends in other parts of the world.

My family didn't own a cell phone in 1994 because we were rich. My dad's employer gave him a phone because we literally lived in a trailer in the woods and couldn't have a landline. He had just gotten a promotion, and would now be on-call and traveling—which is hard to do without a phone.

The trailer was far from the worst place my family ever lived.

Just a few years earlier we lived in a tent, and survived on cheese, peanut butter, milk, and food stamps from the government.

During the first years of my adult life I was on a path toward the same poverty my parents experienced. Then, as a young father with a full-time job, I used a laptop I bought at Walmart and an online degree program to become the first college graduate in my family.

Donald Trump is selling a simple message that is almost impossible to resist if you're caught on the wrong side of progress.

As a society, we need to have a better answer for those displaced by trade than just, "tough luck, that's the way the world works."

We need real solutions—like expanding Trade Adjustment Assistance (TAA) to cover more workers, public investment in industries that can re-absorb skilled blue collar employees (like clean energy), and politicians willing to engage in an honest dialogue about the future of work in an interconnected world, rather than simple nostalgia-driven slogans.

Because the reality is that our globalized world isn't going back in the box.

And, according to a just-released Gallup poll that indicated 72 percent of the public supports free trade, most of us recognize the benefits of a more open world.

Embracing that fact is the only way to create a future where everyone has a chance to live a better life than the one their father experienced.