Sometimes it's a lot more simple than you think...people are buying because they believe the market is going up 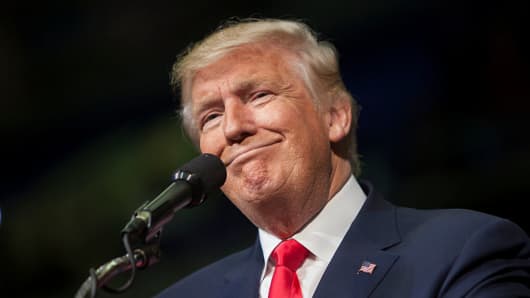 As equity markets continue their extraordinary and interminable upward trajectory, it was wonderful last week to see the ever modest leader of the free world taking time off from bashing journalists, amongst others, to take some well-earned credit for stocks putting on $3.2 trillion in value.

Given the fact that both the Dow and the S&P with their 10 percent plus rallies have led all equities to record after record the President was right that his November election victory had been the catalyst for the latest leg of an unprecedented rally. Indeed, by the tail end of last week, the Dow was up about 15 percent while the S&P had seen six straight weeks of gains.

What has been equally evident in this huge uptick has been the fact that the rationale for a new valuation paradigm has been somewhat tenuous. Those who were uncertain when the market was trading at 14 times forward price/earnings ratio are now ecstatically euphoric at 18 times. Those who called a bear market have turned into bull market cheerleaders. But why?

Is it because the President has made good on his promises? Is it because we have all decided that Federal Reserve Chair Janet Yellen's potential rate hikes are good, not only for the financials but the whole market? Is it because companies have shown signs in the earnings season of growing into their most lofty of valuations? Is it because the global economic supertanker is accelerating?

All of the above have been cited and may harbor a kernel of truth, but none of them are satisfactory in explaining why equities are failing to see any form of a pause, any form of retrenchment and any of the mounting bubble-like characteristics rearing their head again. Bull markets aren't normally like this. So what is going on here really?

SNAP's initial public offering last week for me was the market rally personified. No-one really believed that the stock was worth a fraction of the levels it traded at. No-one really thinks that 69 times trailing revenue is a sensible level at which to buy a company that is seeing slowing growth and leaking cash. People bought SNAP because they thought there would be another punter after them to buy it from them.

And that is it. It's really that simple. People are buying this market, not for technical, political, economic or valuations reasons. They are buying it because they think it is going to go up.

Now, this is a hard concept to admit for market analysts, chief executives, politicians, journalists and just about everyone else. It is basically the old adage of buying into the rally, 'buying on blue' (or green as it has become) and maybe at some stage selling on red -- dressed up as one almighty momentum trade.

Thr term 'momentum' trade is just another way of saying, "I'm buying it because it has been going up" and I guess I don't want to either step away from the herd or miss out on the easiest trade of the year.

Sometimes it's just that simple. Forget the complexities, when things have gone as far as they have there can be no other logical explanation. The pundits with their schmancy, long-winded explanations of market complexities won't thank me for this simplistic analysis, but I'll wager it'll look far more credible than when the market is 10 percent lower, and they are trying to explain why they are suddenly raging bears.