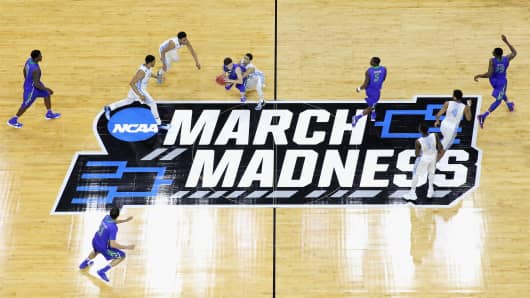 The NCAA's media rights deal with CBS and Turner to air college basketball's March Madness is certainly not a television-only deal, with so many new media platforms being used to deliver games to fans.

But tell that to the actual announcers who've been calling these games for years and years. Many of them are sticking with their true love, television, and letting a younger generation deal with all the new whiz-bang tech. CNBC sat down with many of them at a recent event featuring network executives and on-air talent.

"You haven't researched me I can tell, I mean, I am limited in that area," said game announcer Bill Raftery when asked his thoughts about balancing old traditional media with newer platforms. Raftery coached college basketball into the 1980s and has been a CBS announcer for more than 30 years.

When asked how he deals with all the change coming to the media business, Raftery's announcing partner Verne Lundquist responded, "I don't, I'm an old-fashioned guy, it's too late to change." Lundquist, now in his mid-70s, has been broadcasting sports in some form since the 1960s. When asked if he's ever watched a game on his phone, he said: "No, too small. I don't have a Twitter account, I don't use Facebook. I do have semaphore code, I can do Morse code."

Lundquist also made a good point about the ways that the broadcast isn't changing. He said producers haven't told him to change his approach for a small-screen audience. "Never, it's not happened yet. It might and if it does I'm welcome to that. I do get the social changes and the technological changes, it's just we've not gotten to that point."

His announcing and production team have been using the same approach before anybody ever heard of Twitter or Snapchat. "When we do our telecast in the tournament or regular season, it's done the way it's been done for 20 years."

But it's not just the wise elders of the business who feel this way. "I'm old school, I like watching games on TV," said Wally Szczerbiak, a 40-year-old who played in the NBA through 2009. "How can you not want to watch your game on a 55-, 65-, 75-inch high-definition TV? That's the way sports was meant to be watched"

Nobody CNBC spoke with had used Snapchat, but many knew about it from others in their lives. "We have a lot of young people on our staff who understand the new business models around this new media," said Sean McManus, head of CBS Sports.

"I do no social media," said Hall of Famer Charles Barkley. "I feel no need to talk to all these fools," he continued. "I don't feel the need to talk to every idiot out there. Everybody's opinion is not important so I stay 100 percent away from social media."

"I love new technology. I'm not like Chuck," said announcer Ernie Johnson. "I'm not going to refuse to get on Twitter because he feels like if he gets on Twitter they're going to know what he ate for dinner. I see some valid reasons for a lot of the new technology."

While Johnson is on Instagram, Twitter and Facebook, he's never used Snapchat and hasn't been as deep into social media as his colleague Shaquille O'Neal. "Shaq's deal is anything he does in his life is predicated on how many YouTube hits he'll get. He'll try to talk me into doing something: 'Do this on Snapchat with me. It'll get like 2 billion hits.' I don't want to do it, just leave me alone. And so no I'm not a Snapchat guy." 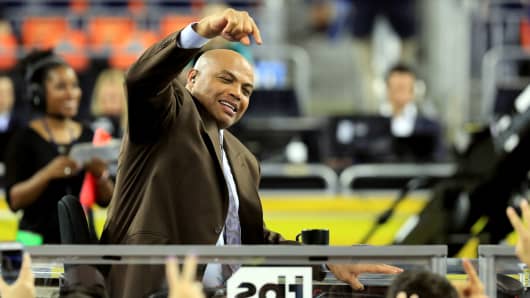 Getty Images
Former NBA player and commentator Charles Barkley points to the crowd prior to the 2016 NCAA Men's Final Four National Championship game between the Villanova Wildcats and the North Carolina Tar Heels at NRG Stadium on April 4, 2016 in Houston, Texas.

Grant Hill reflects the generational divide. "I am on Instagram, Facebook and Twitter. My high school age daughter is on Snapchat. I don't get Snapchat. It's one thing I don't quite understand ... my children are all into it."

Not surprisingly, Lundquist's take on the use, overuse and abuse of social media by today's young athletes was cause for a cautionary warning: "There used to be a four-letter word that begins with 'F.' Now the most dangerous four-letter word in English is S-E-N-D because when you push send it's gone and you can't reach out and grab it back."

Keeping to the traditional approaches of broadcasting TV still has its benefits. David Levy, president of Turner, said the tournament is the "la Creme de la Creme" of broadcasts, and the "event has been growing each and every year." He also suggested the "research currency has to change," implying Nielsen's ratings system. "Consumption of this content is happening in so many different places and we are not capturing it the way we should, and I think if you really capture it the right way, ratings are up and certainly for sports."

"We have to remember that, relatively speaking, ratings for high-profile sporting events are better than they have ever been," said McManus. "I think sports is continuing to be a more and more important element of having a really successful media company."

Disclosure: CNBC parent NBCUniversal is an investor in Snap.