The biggest institutional investors are gobbling up this stock

The insurance and services company has positioned itself to profit amid the uncertainty of the Affordable Care Act's future, analysts say. Ownership among institutional investors has jumped over the past year, and it's now the tenth-most widely held company, according to a fresh report from data and analysis firm eVestment.

UnitedHealth jumped from 21st place in the third quarter of 2016, according to the report. In the fourth quarter, it was held by 13.8 percent of funds. The recent dust-up surrounding the GOP's attempt to replace Obamacare could make it that much more attractive to investors. 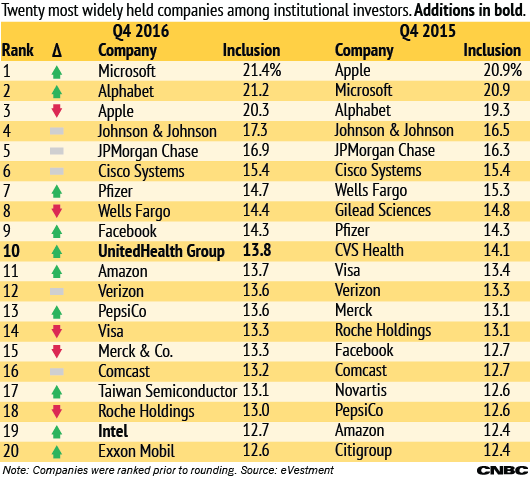 The rally began last spring when UnitedHealth was one of the first to announce it would be dropping out of the health insurance exchanges created under Obamacare. In January 2017, UnitedHealth exceeded analysts' earnings expectations, with a fourth-quarter profit of $2.11 per share, four cents over estimates. The company took a charge for losses on the health exchanges last year, but executives said they don't expect exchange plans to affect results in 2017.

"Regardless of where you are philosophically on the healthcare debate, changes to healthcare in the United States offer both opportunities and challenges for health insurance companies," said Mark Scott, a spokesman for eVestment. "So far, the institutional market seems to be applauding UnitedHealth's moves."

Shares in the company have climbed nearly 35 percent over the past year. 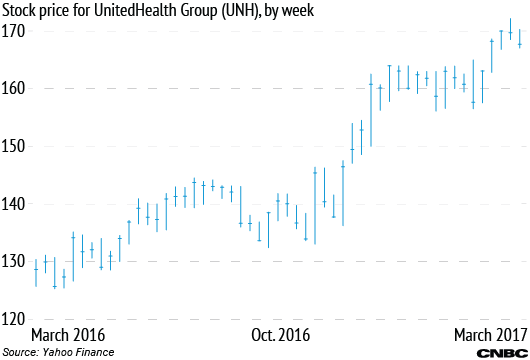 "Healthcare, along with infrastructure, manufacturing and a few other key areas that may see changes given priorities in Washington, are market segments eVestment will be following closely over time," Scott said.

Intel also made it on the eVestment list of the top 20 most widely held stocks, coming in at number 19. Within the top 20 list, Apple fell two places over the year to number three. Facebook and Amazon both moved up a few slots and Taiwan Semiconductor took 17th place in the fourth quarter, up from 32nd the year prior.

AT&T and Home Depot were the two bumped off the leaders list.