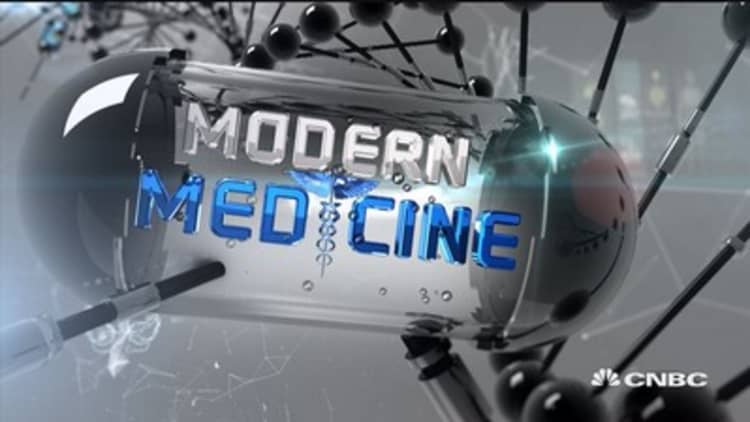 Alzheimer's disease is one of the biggest unanswered questions in medicine.

Five million Americans are currently estimated to have the mind-ravaging disease, a number expected to triple by 2050 without effective interventions. But the track record in drug development has been terrible: a success rate of less than 1 percent.

"Already 1 of $5 of Medicare and Medicaid goes to Alzheimer's," said Rudy Tanzi, director of the genetics and aging research unit at Massachusetts General Hospital and a professor of neurology at Harvard Medical School. "As 71 million Baby Boomers like I head toward risk age, it will go into 1 of $3 or 1 of $2, and Alzheimer's will single-handedly collapse our health-care system. It will single-handedly collapse Medicare and Medicaid in this country."

The need for treatments stands in stark contrast to science's understanding of the disease. With each major clinical trial failure — there have been at least eight in the last decade, most recently Eli Lilly's, in November, and Merck's, in February — the field questions whether researchers are even focusing on the right thing. Specifically: the amyloid plaques clogging the brain that are hallmarks of Alzheimer's.

"The idea has been tested and shown to be incorrect," said George Perry, professor and dean of the College of Sciences at the University of Texas at San Antonio. "On a rational basis there's no reason to continue with this hypothesis."

Perry is in the minority. Researchers like Harvard's Tanzi are convinced by genetic data that amyloid is the right target, saying patients just need to be treated earlier in the disease, before it's started robbing them of memory and cognition.

"Any scientist who's been reading the literature carefully and paying attention to all the details for the last 30 years of the journey of the amyloid hypothesis would have to come to only one conclusion, and that is that the trials have failed the hypothesis," Tanzi said in an interview in his office in Boston.

And despite the failure rate, the leading trials in Alzheimer's disease are still targeting amyloid — but earlier in the disease's course. Biogen is spending more than $2 billion to answer this question in late-stage clinical studies.

But because of the controversy, it's refreshing to see alternative ideas, however early in development. There's the approach of young biotech Voyager Therapeutics, using the viral delivery systems of gene therapy to penetrate the blood-brain barrier, what some have described as a sort of screen door between the body and the brain, to create proteins in brain cells to affect the disease.

"The cool thing about this approach is that because the vector gets into brain cells, neurons or glia, it sets up shop and with a single injection we can produce antibody for many, many years," said Voyager CEO Dr. Steve Paul.

Paul spent years at Lilly and subscribes to the amyloid hypothesis, though a main focus of Voyager's Alzheimer's program is another important protein, tau. It's still a few years from testing in humans.

Another early approach is even more radical: the idea that we could treat Alzheimer's with light.

In a paper published in the journal Nature in December, researchers at MIT led by Dr. Li-Huei Tsai found that light entrainment cleared plaques from the brains of mice. The idea focuses on a brainwave frequency known as gamma.

"Gamma rhythms are known to be involved in higher-order brain functions, like perception, attention, and the formation of working memory," Tsai said from her lab at MIT's Picower Institute for Learning and Memory in Cambridge, Massachusetts.

Those rhythms — neurons firing synchronously in the brain — have been found to be impaired in people with Alzheimer's, Tsai explained. So she set out to see what would happen if they could be restored.

She decided to use a flashing light to aim to restore the rhythms — an idea she says she got after seeing research from the late 1980s in cats. And sure enough, by rigging LED lights to flash at the gamma frequency —  40 times per second — her team found gamma rhythms were restored in the brains of mice.

"We were delighted," Tsai said.

So then the question of what happens when those rhythms come back in an Alzheimer's disease brain.

"It was unbelievable," Tsai recalled. "At first we were very surprised to see that after we induced gamma rhythms in the Alzheimer's model, the amyloid is greatly reduced. Within just one hour, we saw the amyloid level was cut almost by half."

There were other signs of good news in the brain, too: an effect on tau and inflammation, also implicated in Alzheimer's, plus a restoring of the function of microglia — what Tsai described as the brain's janitors — against amyloid.

Scans show normal gamma rhythm versus that in a brain affected by Alzheimer's.
Source: M.I.T.

So does this mean all it takes to treat Alzheimer's is for people to sit in a room for an hour a day with LED lights flashing at 40 times per second? Not so fast, Tsai said. Though she said there has been a lot of excitement around the work.

"Since the paper was published in December last year I literally have been bombarded by emails and phone calls," Tsai said. "Because the approach is so easy and non-invasive, many people want to know how to apply it to human subjects. I think we still really need to know whether there is any adverse effect after long-term treatment."

A startup company, Cognito Therapeutics, has licensed the technology from MIT to advance potential treatments into human testing. Tsai cautioned there is still a ways to go.

"Of course we know there are hundreds of drugs that seem to work perfectly on mouse models, only to all fail in human trials," Tsai said. "Even though we are just super excited about our results so far, I just want to emphasize that."