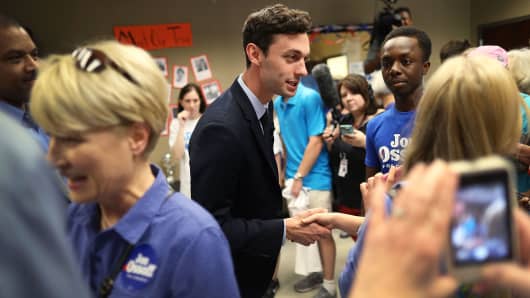 The pundit consensus about Tuesday's special election to fill Georgia's 6th Congressional District seat is that the race could be a very important blow to President Donald Trump's agenda. The reality is that it's yet another case of a left wing drive-by anti-Trump tantrum. And for those who really want to see a resurgent Democratic Party in 2018 and the next presidential election, this race is another dangerous case of political fool's gold.

This popular reasoning focuses on the fact that the seat, vacated by current Health and Human Services Secretary Tom Price, sits in the middle of a traditionally safe Republican stronghold. And if a Democrat like front-runner Jon Ossoff manages to win the election either Tuesday or in a subsequent run-off contest, then of course this means the nation is turning against President Trump and his political future are practically doomed.

Yeah, not so much.

The reality is that Ossoff is basically the only Democrat running a viable campaign. There are 16 candidates total, 11 of whom are Republicans. As the only serious Democrat with a chance, Ossoff is polling just about where you'd expect him to be polling at 40 percent. (The Democrat running against Price in November won an eerily similar 38 percent of the vote.) And then-candidate Donald Trump only won this district in the presidential election by one percentage point. So far, this isn't the stuff of game-changing politics.

"The Trump opposition on the streets and in the halls of Congress is still much more about throwing that election-result tantrum than setting a real agenda going forward."

Then there's the money factor and where it's coming from. Ossoff has raised an astounding $8 million. That shows a massive amount of local voter support, right? Wrong. More than 95 percent of that money comes from outside of Georgia. Looking at money raised in Georgia alone, Ossoff and Republican leading candidate Karen Handel are both in the $400,000 to $500,000 range.

Oh and speaking of outsiders, it turns out that Ossoff doesn't even currently live in the 6th district – he lives down the street. As of now, he can't even vote for himself. Are you feeling inspired yet?

One thing that is different about this election is that President Trump himself has tweeted about it a few times.

In that sense, it is true that an Ossoff win would embarrass Trump. That is, to whatever degree he can be embarrassed and for however long a large amount of people will remember that he tweeted about the election. Of course, this is a president who just had a big defeat on a health-care bill that he also tweeted about regularly and lobbied hard for publicly and behind the scenes. And after losing on that initial bill, he went right back to the drawing board and kept working. In other words, "Twitter embarrassments" are hardly President Trump's Achilles' heel.

But this kind of ephemeral drive-by attack against Trump is increasingly common these days. They pop up for a while and then they seem to disappear. That goes for so-called issues like the accusations of a Russian conspiracy with the Trump campaign, the push to get President Trump to release past tax returns, or the theory that some kind of white supremacist resurgence is happening because of the Trump win. Sure there are people who focus on one or two of these issues constantly, but the rest of the nation's interest is fleeting and fickle.

And there's a reason for that. The Trump opposition on the streets and in the halls of Congress is still much more about throwing that election-result tantrum than setting a real agenda going forward. That's why most of the money for this election is coming from out of state donors backing a guy who doesn't even live in the district right now.

And hardly anyone expects Ossoff to win the 50 percent or more needed to take the House seat in this election. The most likely outcome is that he and Handel will face off in a run-off election and then all bets will be off. Because as soon as the run-off election is set, Handel will likely consolidate the GOP vote and her chances will increase exponentially. Then the nation's interest in this race will come to an abrupt close. The same thing happened after last week's special House election in Kansas, where anti-Trump forces hoped to win the seat vacated by current CIA Director Mike Pompeo. When they lost, the story faded from view in the mainstream media.

This is precisely the kind of thing the Republicans did in response to President Obama's 2009 and 2012 election victories; they spent their money and energies simply opposing his policies without spending enough time developing more of their own. The result is that you now have a GOP — with majorities in both houses of Congress and a president in the White House — that still wasn't prepared to pass a health-insurance bill and can't get its act together on tax reform either. Opposing President Obama's agenda, or saying they did, was apparently all the Congressional Republican candidates in 2010 and 2014 were about all along.

That's the fool's gold aspect of this election. Win or lose Tuesday — or in a subsequent run-off election — this Georgia election means almost nothing outside of the 6th district itself. If Democrats really want to win back some political power, their efforts will be much better spent focusing on presenting the American people with their own clear agenda and starting the process of finding some viable candidates to run for president in 2020 and beyond.