YOKOHAMA, Japan — Protectionist rhetoric may be in vogue among some Western politicians, but many of the top economic leaders in Asia are saying they aren't worried. These officials suggest trade will become more open and free, and globalization is the solution to many of the world's problems.

From the pulpit at this week's Asian Development Bank meeting in Japan, central bankers and finance ministers from across the region fought back against the idea that international commerce should face more restrictions. Some even rejected the notion that such moves were feasible, despite the occasional setback like the U.S. pulling out of the Trans-Pacific Partnership (TPP) — a trade deal that would have established rules and opened markets between 12 nations accounting for roughly 40 percent of global GDP.

"I believe that an individual trade pact may not succeed because one country has pulled out, as in the case of TPP," Arun Jaitley, India's minister of finance, defense and corporate affairs, said at a CNBC-hosted debate during the ADB meeting. "But trade is going to move forward."

Jaitley's comments were echoed by others at the debate, including ADB President Takehiko Nakao, who said he did not believe recent protectionist remarks "by several policymakers in the world" would immediately impact Asia and its continued opening up.

"As long as we keep reform momentum, which we are doing, we should be okay," he said, reflecting on the likely demise of the TPP in the absence of U.S. membership.

For his part, Nakao took an unequivocal stance on trade. "We are very clear: Free trade is important and protectionist trade practices are not good, and we should make every effort to keep the trade and investment regime open," he said during the debate.

Even Japan and China — which have shared a rocky relationship — agreed to strengthen their financial engagement at a meeting between the countries' finance ministers on the sidelines of the ADB meeting. Earlier this week, finance officials from Japan, China and South Korea issued a statement rejecting protectionism. 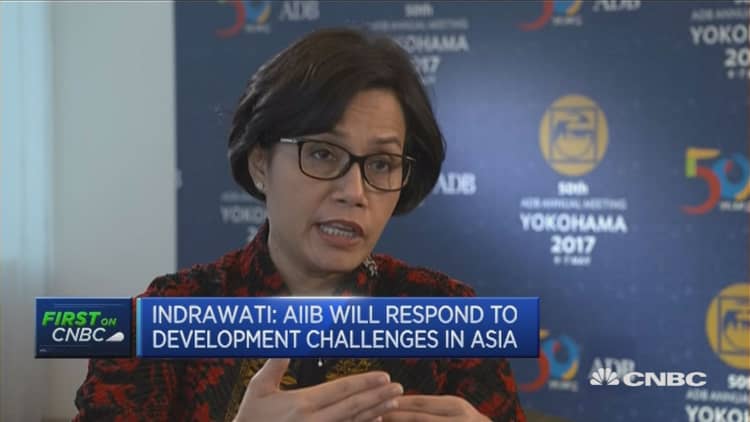 And even when there are issues with global trade, they should be resolved by global, multilateral institutions — not one country's administration declaring what is right and wrong — according to Pakistani Finance Minister Mohammad Ishaq Dar. "I think it is the responsibility of the World Trade Organization. We have global bodies, (so) it will be ensured that there should be no protectionism," he said of President Donald Trump's attempts to crack down on allegedly unfair trading partners.

Those actions by the White House have made Trump's rhetoric "real" for many countries, according to Indonesian Finance Minister Sri Mulyani Indrawati. Indonesia is one of several U.S. trading partners set to be investigated for trade imbalances by command of an executive order.

"The policy direction has already translated into action," she said, while explaining that changes to global trade policies could create obstacles to growth. "And certainly countries have to respond to that."

The Indonesian minister did note, however, that there's sense to Trump's oft-repeated phrasing that trade needs to be fair. "I think that is a legitimate concern," she said, adding that governments should seek to foster growth that doesn't leave some people behind.

Although countries may respond to cues coming out of the world's largest economy, many of the events during the multiday meeting demonstrated a decidedly pro-globalization character: Multinational "integrated" approaches and "global village" were regular phrases at events focusing on a wide range of issues.

One example of that inter-connectivity: Zeti Akhtar Aziz, former governor of Malaysia's central bank, said during a panel that central bankers are regularly in touch over phone — including by text messages.