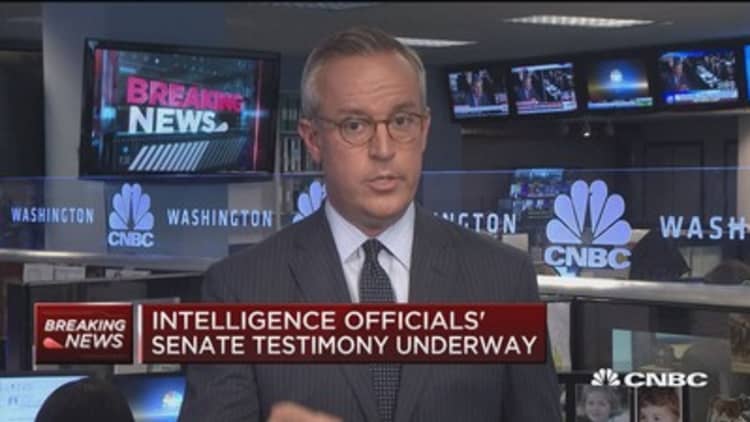 Two top U.S. intelligence officials denied Wednesday that they had ever felt "pressured" to intervene in a federal investigation.

However, neither Director of National Intelligence Dan Coats nor NSA Director Mike Rogers would comment specifically to a Senate committee about whether anyone in the White House "asked" them to influence a probe.

It comes a day before former FBI Director James Comey will speak publicly for the first time on Thursday about the events that led to his firing last month. Comey was ousted as he was overseeing an investigation into Russian interference in the 2016 election and links between the Trump campaign and Russia.

The former FBI chief's remarks have potentially serious ramifications, as he may say whether he felt Trump tried to interfere with the FBI investigation. He also could cast light on why the president fired him.

The two men were pressed by Republican Sen. Marco Rubio of Florida to clarify: "Are you prepared to say you've never been asked?"

They said they stuck to statements they made moments earlier in the Senate hearing when questioned by Democratic Sen. Mark Warner of Virginia.

Coats made a similar blanket denial: "In my time of service, which is interacting with the president of the United States or anybody in his administration, I have never been pressured — I have never felt pressured — to intervene or interfere in any way with shaping intelligence in a political way or in relation to an ongoing investigation."

Neither official would speak specifically about media reports that Trump asked them to publicly say that evidence showed that Trump's campaign did not collude with Russia. Coats called it "inappropriate" to talk about his conversation with Trump.

Coats also would not comment specifically about The Washington Post report that Coats told associates that Trump asked him if he could persuade former FBI Director James Comey to ease off a probe into former national security advisor Michael Flynn, who was fired for lying to members of the administration about his links to Moscow.

Asked repeatedly later in the hearing by independent Sen. Angus King of Maine about his legal justification for not addressing his conversation with Trump, Coats said, "I'm not sure I have a legal basis."

Both Coats and Rogers said they will answer questions about their conversations with Trump only if it is in a closed setting and the president does not invoke executive privilege and try to block them from doing so.