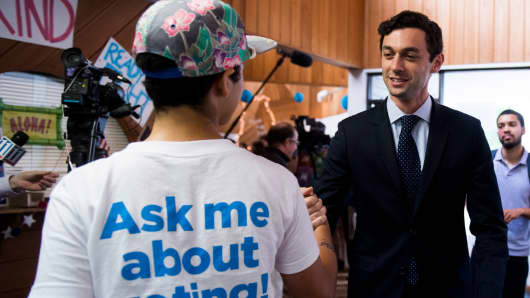 Record money has poured into the Georgia special congressional election, widely seen as a test of whether Democrats can flip Republican-leaning seats in the President Donald Trump era.

The two campaigns and outside groups supporting and opposing them shelled out at least $36 million as of May 31. The election has easily set a record for spending in a House race, according to NBC News.

Democrats aim to leverage Trump's dismal approval rating and opposition to the Republican health-care bill into winning Republican seats and potentially taking control of the House in 2018. The GOP has won both special elections so far for red seats vacated by Trump nominees, despite Democrats performing better in those districts than they did last year.

The Georgia race's implications for the 2018 midterms are unclear. But Republicans may see holding the seat as one sign that Trump's agenda and lack of popularity may not be as damaging for the party as Democrats hope.

Trump won the district by only 1.5 points last year. Still, Price got more than 60 percent of the vote there in 2016.

Recent polls show Ossoff with a slight edge over Handel leading up to the election, according to Huffington Post Pollster. Ossoff won more than 48 percent of the vote in an April primary in which Handel got about 20 percent due to a crowded Republican field.

The special election is drawing attention from across the country. Trump has chimed in several times, including in a tweet Monday when he urged voters to support Handel and argued that Democrats want to "stop tax cuts, good health care and border security."

With that national focus — and an association of Handel with Trump — huge sums of money have flowed in to both sides. Ossoff's campaign raised more than $23.6 million by the end of May while Handel's brought in more than $4.5 million. Much of Ossoff's money has come from blue strongholds like California and New York.

Price first won the House seat in 2004 and never spent more than $2.5 million in an election. Ossoff and Handel's spending is all the more remarkable because Price was no slouch — he spent more than the average Republican and Democratic House incumbent in 2016.

The activity from big-money interest groups on both the right and left has also underscored the national attention on the special election. Outside groups supporting and opposing both candidates had shelled out nearly $11 million as of May 31.

The Georgia special election is not the only one taking place Tuesday. Another will also take place in South Carolina's 5th District, for a seat vacated by Office of Management and Budget Director Mick Mulvaney.

The race between Republican Ralph Norman and Democrat Archie Parnell has not attracted as much attention, in part because neither candidate spent more than $1.16 million through May 31.