Op-Ed: China will cooperate to narrow US trade deficit

Both countries realize that the existing trade imbalance is unsustainably large and disruptive for their more stable political and security ties. In the case of China, the current state of economic exchanges with the U.S. runs counter to Beijing's fundamental foreign policy doctrine — "win-win cooperation" — enshrined in documents of the country's highest executive and legislative authorities. 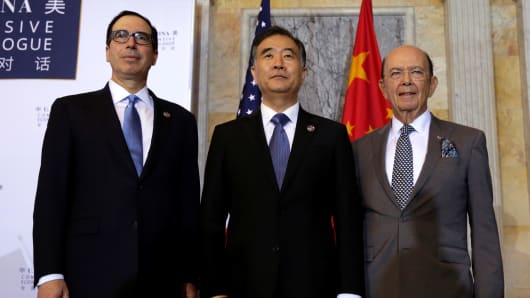 The solution path, however, will be long and will require major structural adjustments in both economies.

Over the last three decades, the U.S. has helped to set up China's large-scale manufacturing operations at the cost of impoverishing entire regions of American goods-producing industries. China got American direct investments, technology transfers and a liberal access to intellectual properties.

From manufacturers to entertainers

That sowed the seeds of a profoundly unbalanced trade relationship. Just in the course of this decade (including the first five months of this year), China took out of its U.S. trade a net surplus of $2.1 trillion, and the Chinese sources now estimate that 40 percent of this American trade deficit is generated by U.S. companies with production facilities in China.

Meanwhile, America's entertainment and hospitality industries — the winners of our post-industrial economy — leave 14 million people out of work (or stable employment), with another 95 million out of the active civilian labor force, while the miserable 0.2 percent productivity gains have relegated the economy to 1.5 to 2.0 percent growth rates.

Apart from that human drama that we now have to deal with, it also sounds like the Chinese have difficulty finding anything interesting to buy in the U.S., other than pieces of real estate in California, Florida and Texas. Yes, they will relent to buy some meat, maybe some rice (if we keep it clean so it does not contaminate their rice fields), LNG and they will occasionally splurge on passenger aircraft.

And then the Chinese are complaining about American "trade discrimination." They are saying that their trade surplus with the U.S. would be cut by "24 to 34 percent" if Washington would "liberalize its export barriers against China to the same level as those applicable to Brazil or France." At issue is mainly Washington's refusal to allow sales to China of strategically sensitive dual-use technologies.

But the sad fact is that the Chinese are not even recycling in the U.S. (with interest) the dollars they get from exports to America. In the year to May, for example, China's net holdings of Treasury securities were cut down by $141.8 billion. Only one-third of that decline was offset by an estimated $45.6 billion in direct investment inflows from China last year.

That's hardly a "win-win" proposition for Washington in view of its $347 billion trade deficit with China in 2016, and another $138 billion in the first five months of this year.

A small consolation is that — unlike the German-led EU — China is responding to Washington's displeasure about its large trade surpluses with America: In the first five months of this year, U.S. exports to China soared at an annual rate of 17 percent. By comparison, we are getting nowhere with Germany. Over the same period, U.S. sales to the EU's largest economy are virtually flat.

Level the playing field — and compete

According to last week's statements by China's President Xi Jinping, Beijing wants to keep an open system of international trade and investments. That policy was re-stated by the Chinese trade delegation that ended its negotiations in Washington last Wednesday. "A one-year action plan" was discussed with the U.S., they said, with particular emphasis on expanding "trade in services, civilian hi-tech and agriculture." Beijing's official media outlets are also reporting China's proposal of a broad range of bilateral relations where they seek "comprehensive win-win cooperation" with the U.S.

All that looks very much like the agenda Xi was reportedly claiming to President Barack Obama during their Sunnylands meeting in June 2013 — less than three months after he became the president of China. But nothing came of that.

Some in Beijing may have seen the U.S. pushing the multilateral Trans-Pacific Partnership trade agreement to contain China, while the U.S. was clarifying its treaty-bound obligation to remain militarily engaged in the Sino-Japanese dispute about maritime borders.

Xi then forged ahead with China's own Asian free trade agreements, new lending institutions and a huge new Silk Road (the "Belt and Road" initiative) — all the projects that Washington still regards with suspicion and varying degrees of hostility.

That's where things are now.

Neglected and mismanaged for decades, America's trade problem with China has been allowed to worsen to such an extent that quick and significant corrections impatiently sought by the current U.S. administration may only damage an already strained relationship. A clear, specific and dated "critical path" trade program is all that can be realistically expected at the moment. And that's what China seems to have agreed upon.

Apart from that, a level playing field with regard to market access and trade practices is a must. Washington and Beijing should have no problems with that.

But, above all, the U.S. should stop its self-destructive and paralyzing partisan bickering. Washington should urgently lift the economy out of its lethargic growth rate by adopting and implementing a coherent program of monetary, fiscal, structural and trade policies.

Trade partners and strategic competitors have to get the unambiguous message: Declinism is not part of America's future.

Washington has an opportunity to reset the trade clock with China because Beijing knows that its bilateral trade advantage has gone to unsustainable levels. If the administration manages this new situation correctly, the economy could get a fast-acting and substantial stimulus from improving trade and investment accounts. The White House can do that without obstructive and dilatory partisan meddling.

One wonders whether the Beltway gridlock specialists realize — or care — how much the country is being held back by their little games at a time when America's economic and security interests are deeply challenged.

China's global sprawl is nothing short of prodigious. Name a place, Beijing is there. China is feted at expensive jamborees in the Swiss Alps and at the G-20 Hamburg summit as a champion of free trade, globalization and an "engine of world growth" — even though it is currently selling $460 billion worth of goods more than it is buying from the rest of the world.

No country is too small for China's business and good will projects: A state-of-the-art manufacturing hub in Ethiopia; a fleet of Chinese-built electric taxi cabs in Brazil's Belo Horizonte; building with Ukraine the world's largest airplane (AN-225); resurrecting factories, building bridges, deep-sea ports, high-speed railways and modern highways in North Africa, Central Europe and the Balkans; getting ready to invest $2 billion in restoring water supplies, electricity and residential housing in a war-ravaged Syria...

The U.S. cannot play a meaningful "big power relationship," advocated by China, unless it urgently gets its economy on a sustainably faster and more balanced growth path. Washington has all the instruments it needs to do that — if it can get rid of what Jamie Dimon aptly called "the stupid s--- we have to deal with."