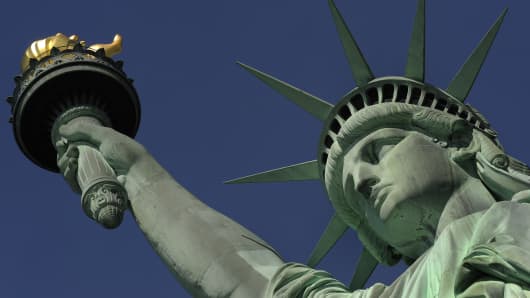 Timothy A. Clary | AFP | Getty Images
The Statue of Liberty.

President Donald Trump set off a firestorm this week when he publicly announced his support for a merit-based immigration-reform bill.

Criticisms of the proposal predictably devolved into cries of racism and the argument that taking in more high-skilled immigrants is tantamount to cruelty and a breaking of faith with America's role as a beacon for the "huddled masses" (depicted in the famous Emma Lazarus poem "The New Colossus" engraved at the pedestal of the Statue of Liberty). CNN White House correspondent Jim Acosta even cited the poem in a fiery exchange over the bill with Trump policy adviser Stephen Miller.

But even less emotional and sober critics of the merit-based immigration idea are depicting it as a conflict between a pro-business/pro-growth agenda and a more compassionate response to any and all people seeking a better and safer life in America.

Here's the thing: A more merit-based immigration policy is actually a more compassionate policy, we just haven't heard that argument explained very much. (And, let's face it: Conservatives are really bad at explaining why their favorite policies aren't just practical or spur economic growth, but compassionate as well.)

"If the proponents of our current family-based immigration policy believe they own the compassion card, they need to explain why importing millions of unskilled immigrants into this country without a corresponding number of higher-paid skilled people to provide them with work opportunities is so compassionate."

Perhaps that argument could best be made by the growing number of experts warning the nation about the dangerous scenario we're facing with an aging population and fewer primary care doctors to treat them. A report released in March by the Association of American Medical Colleges estimate that there could be a shortage of as many as 43,100 primary care physicians by 2030. The reason is simple in that it costs so much money, time, and effort to become a primary care doctor, and the pay is relatively low compared to those costs. Merit-based immigration policies can make a major dent in this area, especially since so many foreign-born and foreign-trained doctors don't carry massive student debt and many of the other financial barriers to entry to medicine native-born Americans do. This one argument alone should be at the forefront of any merit-based immigration policy, as the specter of millions of Americans unable to even find a doctor when they need one ranks pretty high on the "compassionate reasons meter."

Of course, the medical needs are just the low-hanging fruit. It will take a little more political and messaging skill to explain why refocusing our immigration policies to bring in more technically-skilled workers is more compassionate for the entire country. But, indeed, it is. The first part of the argument is that if U.S.-based companies cannot fill the growing number of hard-to-fill tech jobs, they will have the natural inclination to move overseas or go out of business entirely.

The second part of the argument gets us closer to the compassion theme. That's the argument that unfilled tech jobs will have an impact on other businesses that cater to tech companies and their employees. Think about it: Every empty desk or office at a tech company is one less employee buying work clothes, grabbing lunch at the fast-food place at the corner, or taking an Uber home. In fact, according to Glassdoor Chief Economist Andrew Chamberlain, the overall value to our broader economy of the approximately 263,586 unfilled IT jobs posted by employers in the U.S. adds up to $20.1 billion. That's a lot of compassion.

If the proponents of our current family-based immigration policy believe they own the compassion card, they need to explain why importing millions of unskilled immigrants into this country without a corresponding number of higher-paid skilled people to provide them with work opportunities is so compassionate. And they also need to explain why it would be compassionate to add to the growing number of Americans of all kinds struggling to find a doctor.

But just watch. Any policy that helps higher skilled or wealthier citizens and immigrants alike reflexively gets attacked by liberal critics as another "trickle-down economics" boondoggle. That term was coined by the 1920s humorist Will Rogers to skewer President Herbert Hoover's policies meant to save the banks. It was resurrected by critics of President Ronald Reagan's tax cuts in the 1980s. Sloganeering like that might make for good soundbites and bumper stickers, but it adds little to a more serious debate we need to have about economics.

But issue polls only go so far. Americans can change their minds on controversial issues relatively quickly. President Trump and conservative immigration-reform advocates will have to make a stronger and better case for this policy going forward. And if they don't make compassion-based arguments first, last, and always during those efforts, their chances of actually changing the policy will be slim and none.

CORRECTION: A report released in March by the Association of American Medical Colleges estimate that there could be a shortage of as many as 43,100 primary care physicians by 2030. An earlier version of this story stated it was as many as 105,000, which is actually the estimated shortage for all physicians, not just primary care.