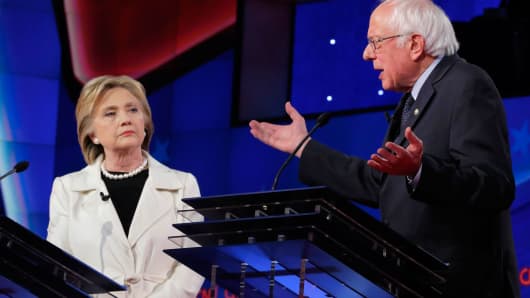 Donna Brazile's explosive book excerpt that confessed Hillary Clinton's campaign was essentially pulling the strings at the Democratic National Committee nearly a year before she was the official party nominee is the latest proof that, even in a changing populist uprising spreading nationwide, the Democratic Party still clings to money before all else.

In her book, Brazile, the former DNC interim vice chair who fed questions to Hillary Clinton's campaign in advance of a 2016 Democratic Primary town hall, explained how she uncovered the joint fundraising agreement struck between the Clinton campaign and the DNC in August, 2015—before any caucuses, primaries, or debates—that not only allowed the Clinton campaign to essentially funnel money designated for state parties and the DNC back into its own coffers, but gave it stunning control over staffing, strategy, and finances at the "neutral" DNC.

While it stated that the agreement was "exclusively on preparations for the General Election and not the Democratic Primary" that clause isn't really worth the paper it's written on considering the Clinton campaign was given considerable control over many things during the primary that, shocker!, had ramifications during the primary.

Basically, in exchange for raising money for a near-bankrupt DNC, the deal provided the Clinton campaign with advanced screening of communications sent out about other primary candidates during the primary, and gave it, as Brazile pointed out and the documents confirmed, control over which "of two candidates previously identified as acceptable to HFA [Hillary For America]" would be hired as DNC Communications Director during the primary.

The Hillbots—or Hillary supporters—spent the last few days telling progressives and Sanders supporters not to believe their lying eyes. They then moved on to their favorite deflections: Sanders isn't even a Democrat and Clinton beat him by 4 million votes.

Both are true, but more importantly, not the point of why Brazile's confessional, which caused her cocktail-crowd, Democratic friends of several decades to turn on her faster than President Trump drops an unhinged tweet, is a major cancer.

"Clearly, the process was indeed rigged against Bernie Sanders (and let's not forget good ol Martin O'Malley, Lincoln Chafee, and Jim Webb too!). But, maybe worse than handing the keys to the DNC's car over to Clinton nearly a year before she was the official nominee is why the DNC did so."

What she showed was that money rules all else in the Democratic Party—the DNC was bankrupted, and Clinton's campaign was the highest bidder to hoard as much special interest money into the DNC's starving coffers. As a result, a progressive, anti-establishment candidate like Sanders had to fight more than a lack of name recognition, party leaders' endorsements, financial and staffing disadvantages in 2016: he basically was up against a DNC strangled by Clinton's money-soaked grip.

Does any objective person think the Clinton campaign, when given say on who the DNC communications chair would be during the primary, wouldn't try to ram through a communications director who benefited them immediately, thus helping them become the general election candidate?

And benefit they did: the DNC hired Luis Miranda, a veteran communications operative for establishment figures including John Kerry and President Obama. As WikiLeaks revealed, he worked overtime behind the scenes on behalf of DNC Chair Debbie Wasserman Schultz—Clinton's 2008 campaign co-chair—to plant hit pieces on Bernie Sanders in media outlets during the primary, which ultimately got him fired when Brazile cleaned house.

Does any objective person think the DNC wasn't making decisions—like, planting debates at dead zones like the Saturday night before Christmas, or having its chairwoman go on national television to falsely declare chairs were thrown by Sanders supporters at the Nevada State Convention with zero video evidence of such violence occurring—due to the fact that the DNC had handed over sizable control over finances, staffing, and messaging to Clinton-world in exchange for Hillary keeping the money flowing into the DNC?

If you don't, I've got a bridge to sell you.

Clearly, the process was indeed rigged against Bernie Sanders (and let's not forget good ol Martin O'Malley, Lincoln Chafee, and Jim Webb too!).

But, maybe worse than handing the keys to the DNC's car over to Clinton nearly a year before she was the official nominee is why the DNC did so.

Of course, as has been the case for the last 30 years in the Democratic Party, it's about the money Lebowski!

In an email from Perkins Coie, a law firm representing the Clinton campaign and the DNC, to the Sanders campaign in September, 2015 with a copy of a "standard joint fundraising agreement," the Sanders campaign was instructed that control over party finances will be linked to how much money he raises.

As The Washington Post reported, attorney Graham Wilson told the Sanders campaign that it could have a say in how funds would be used to "prepare for the general election" if it raised "significantly more" money for the DNC that was required to obtain the party's voter file.

TRANSLATED: if Bernie hoarded boat loads of cash from Wall Street, big pharma, big oil, Silicon Valley, and plutocrats across America, the DNC would give him a say on some things for the general election—but NOT staffing, messaging, or strategy—like it gave to their preferred candidate Hillary Clinton.

Sanders campaign declined to utilize the joint fundraising agreement offer from the DNC because its entire DNA went against raising big corporate money, instead choosing to target small dollar donations. As a result of Sanders opting to answer to working people who donated rather than millionares, billionares, and corporations, he wasn't afforded the same say in strategy, hires, or finances as Clinton over a body that, by its own by laws, is supposed to be impartial in the primary process and not be providing special privileges to any candidate during a competitive primary.

And that folks is the real cancer that permeates the entire Democratic Party— during the 2016 primary process and continuing today as the party heads into the crucial 2018 midterms: raising money and keeping the cash flowing was and is the highest priority for party leaders and the DNC.

More important than championing issues and policies that will connect with struggling, working people—thus being more likely to attract a more diverse coalition of financial contributions as well as drive more people to vote for Democratic candidates—is having more money than the other candidate.

How'd that philosophy work for Clinton, who outspent Trump two to one?

Sure, running for office is expensive. But Sanders and down-ballot progressives like Tim Canova proved you can compete by funneling in hope and grassroots energy rather than endless fundraising and kissing the rings of plutocrats. That's what Nancy Pelosi, Chuck Schumer, and all the political operatives still swimming in Clinton's pool still don't get.

Donna Brazile ultimately revealed the primary wasn't a fair fight—something most smart, intellectually honest observers have known for nearly two years. But she may have revealed something way more significant.

The party millions of people are depending on to dethrone a dangerous President is still operating in a pre-Bernie Sanders era, where fundraising equals control, and money equals victory.

It's this cluelessness, out of touch-ness, and tone-deafness among Democratic elites that is rigging the game.

Commentary by Jordan Chariton, a political reporter for The Young Turks, reporting on the presidential campaign trail. He can be seen on TYT Politics. Before TYT, Jordan was a reporter for TheWrap and TVNewser. Follow him on Twitter @JordanChariton.