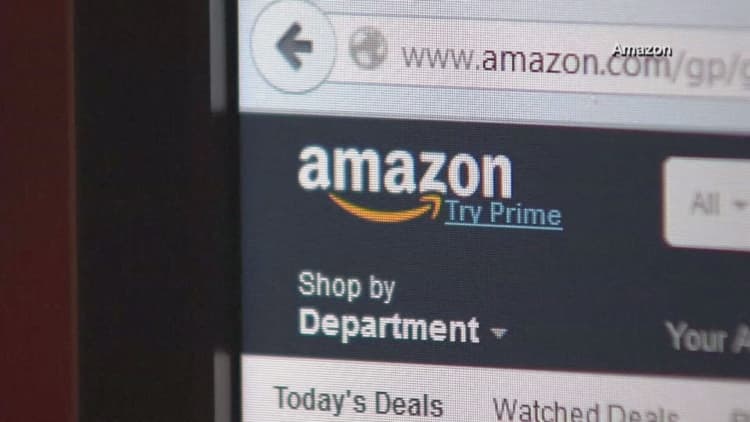 Lifetime Brands, a houseware maker best known for its FarberWare and KitchenAid product lines, used to finish most of its holiday shipments by the end of October. As a traditional brick-and-mortar wholesaler, Lifetime Brands shipped the products to retailers in advance of the holiday season so the stores could fill their racks in time.

But this year, its warehouses remain busy deep into December. That's because Amazon is ordering huge quantities to meet the growing demand from online holiday shoppers. Dan Siegel, president of Lifetime Brands, says, at this pace, he wouldn't be surprised if Amazon became its biggest customer in three years (Amazon wasn't even in the top 25 until four years ago).

"We've shifted our resources in our warehouse to be competent for Amazon's high demand," Siegel said. "Amazon is really smoking right now."

The change at Lifetime Brands, a public company with roughly $600 million in annual revenue, is illustrative of how even large public companies are starting to become reliant on Amazon's online shopping site. As Amazon has grown its dominance, it's changed the game for many companies in a wide range of industries.

Lifetime Brands — whose stock is down about 5 percent for the past year — doesn't yet generate more than 10 percent of its revenue from Amazon, which requires disclosure, and sells through other retailers like Walmart and Costco as well. But at least 21 public companies have generated 10 percent or more of their revenue from Amazon in their most recent fiscal year, according to FactSet.

That's a much deeper list than some of its competitors. Target, for example, only has eight suppliers that passed the 10 percent revenue threshold for disclosure, while Microsoft has just seven. EBay only has two. Companies like Walmart and Apple, meanwhile, still have a longer list of mega suppliers than Amazon.

Because of its growing market power, Amazon has immense leverage over its suppliers.

One supplier, who declined to be identified due to privacy concerns, said Amazon reviews its contract every year and plays hardball tactics to put pricing pressure on its deal. Some of the concessions include forcing the supplier to take on more of the freight cost between warehouses, or to buy more ads on Amazon, in return for remaining a major wholesale partner.

"It's just a never-ending ask on every line item," this person said. "Every year they try to get more, so we fight with them every year not to give it up."

Joe Hansen, co-founder of BuyBox Experts, who helps suppliers on Amazon, calls Amazon the "toughest negotiator" in online and retail combined because of the visibility it provides and ability to drive more sales for any supplier instantly. That, combined with the collapse of traditional brick-and-mortar retailers, is forcing suppliers to play by Amazon's rules.

"It's definitely a transitional era for brands because Amazon is sort of peeking over them. Brands really have strong incentive to sell on Amazon," he said. (Amazon did not respond to requests for comment.)

The bigger concern is that Amazon — not the suppliers — have a direct relationship with consumers because they're the ones selling the products. That means Amazon owns the customer data and knows what sells well on its site — and if needed, it can go make those products themselves at a lower cost, supplanting the larger brand almost immediately. For example, Amazon-branded batteries now outsell the once top-selling Duracell batteries on Amazon, Hansen pointed out.

Amazon's dominance, and the fact that it can limit companies' access to data about their own customers, is "a major concern and has the potential to hurt almost every brand long term," Hansen said.

Lifetime Brands' Siegel said he remains a happy Amazon supplier, but did note that not having a direct relationship with customers is a challenge. In order to solve this, Lifetime has come up with a companywide mandate called the "5-star experience," a guideline that forces every product unit to be mindful of getting positive reviews because they're critical to sales growth — he says, in general, a single "1-star" review can have the same impact as a dozen "5-star" reviews in sales.