Trump isn't getting more popular, but his policies are 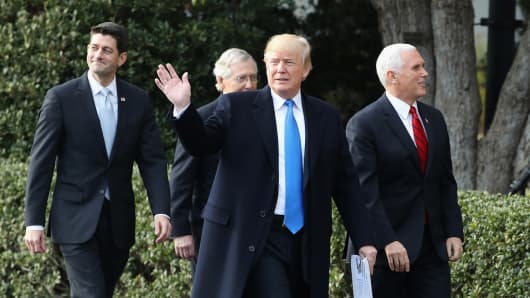 Thanks to the improving economy, something very unusual is going on in American politics.

American voters are separating the personal from the political in perhaps the most significant way ever.

President Donald Trump's overall approval rating in most polls is creeping up lately, yet it remains at historically weak levels for a president at this stage in his first term. But at the same time, voters are starting to become more positive about the economy and more willing to give Trump the credit for it.

Several polls are noting this trend, but it's most clear in the latest Quinnipiac College poll released on Feb. 7. That poll still has Trump at a weak 40 percent approval rating. But 70 percent of respondents said the overall economy is "excellent" or "good." That's up from 66 percent in January and just 53 percent in April of last year.

Most importantly for the political discussion, voters in the Quinnipiac poll said Trump was more responsible for the economy than former President Barack Obama. That was by a 48 percent to 41 percent margin. That's a 16 percentage point swing from January when the poll's respondents said President Obama was more responsible by a 49 to 40 percent difference.

These numbers were enough to get poll expert Nate Silver to sit up and take notice:

This is indeed major news. While it may seem like it a lot of the time, presidential campaigns are not literally popularity contests. The candidate most voters find personally more likable does not always win elections, according to many scholarly studies on the subject.

Those same studies show that voters usually choose the candidate who looks and sounds the most competent to them on major issues. So, personality and personal delivery are still crucial, but likability is still not as important as at least a perceived position on the issues.

These economic polls show that the American people seem to be coming to terms with the fact that they may not like Trump personally, but they do like his track record on the most crucial issue: the economy. This is literally the "competency over likability" winning formula.

The question now is whether that will tip the balance the upcoming 2018 midterm elections. No, Trump is not a candidate in those elections. But most midterm elections usually act as a referendum on the president and the job he's doing so far.

More importantly, the Democrats have long made it clear that they were going to do whatever they could to make Trump and his personal unpopularity their biggest issue in the midterms.

That seemed like a pretty good bet for months, as polls showed the Democrats with unusually large leads in generic congressional election polls. Now that trend has started to reverse at about the same time that Trump's numbers began to get a boost.

But that's not the correlation to focus on the most. It's crucial to remember this is still not about personal popularity. The most dramatic positive move in the polls recently is not for Trump personally, but for his signature tax reform law.

Tax reform was suffering with just 26 percent approval in the Monmouth poll in December. Just one month later, approval shot up to 44 percent and pulled even with those who disapproved of it. A New York Times poll taken a little earlier last month saw the same trend beginning to emerge. This could start to accelerate even more as more Americans start to see larger paychecks this month.

That's what makes this a double whammy for the Democrats. They can't counterattack these economic developments and perceptions simply by continuing their attacks on Trump. It's not Trump the voters are increasingly supporting or even focusing on, it's his policies.

The downside to all of this for the GOP is that the economy can still slow down between now and November. The stock market's now-intense volatility can burn a lot of investors, too. If that happens, Trump and the Republicans will have nowhere to hide as they take more and more ownership for that economy. But economic slowdowns are always a danger threatening every incumbent president and party in control of Congress. That's nothing new.

What is new is that the voters are showing more than ever that they don't need to like a president or a political party to support their perceived success. That means the Democrats may be concentrating their fire on the wrong target. Trump has endured maximum character assassination for years. But if his policies are soaring in popularity, it's going to be very hard to use him as a proxy to defeat his party in the midterms.