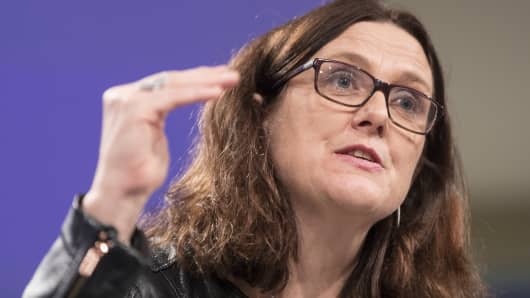 At the start of this month President Donald Trump announced he would impose import tariffs on steel and aluminum. Many domestic industries and businesses seemed bewildered, and expressed concern that this would artificially inflate prices for such a key raw material.

And in the ensuing fortnight, America's trading allies overseas desperately — and fruitlessly — sought clarity from the Trump administration about the applicability of these tariffs, and the process for winning possible exemptions.

I spent much of that period in Brussels, where the prospect of a 25 percent tariff on European-produced steel had prompted an admixture of consternation, confusion and ultimately frustration among executives, national ministers and EU policymakers. The bloc's trade commissioner Cecilia Malmstrom posited that the proposals amounted to "threats" and "bullying" and ultimately flew to Washington to argue with her American counterparts that the U.S. pretext for imposing the tariffs — national security — was without merit given the depth and strength of the transatlantic alliance.

It soon became clear to European officials that there was no formalized path to winning exemption, besides aggressive, public push-back and a certain amount of horse-trading behind closed doors.

Eventually, the European Commission's arguments seemed to pay off, and at the very last minute EU steel exports were exempt, alongside those from Argentina, Australia, Brazil, Canada, Mexico and South Korea. This meant that as of Friday morning roughly two-thirds of the world's steel production could still land at America's ports without facing any fresh duties. It was unclear what impact such a comparatively minor measure of protection for domestic production could in turn have on American firms that Trump had long championed. U.S. Steel, for instance, had envisaged the creation of 500 new jobs soon after the initial tariffs were announced, claiming it would allow it by late summer to reopen a blast furnace and part of a shuttered steelmaking plant in Illinois. If domestic prices for steel did not improve significantly, the margin arguments for that capital investment might vanish.

However, in a typically "Trumpian" move designed to retain White House leverage (compare the regularly reoccurring threat to decertify Iran's compliance with the Obama-era nuclear pact every six months), even the exemptions for allies were announced as temporary, with a May 1 expiration date.

Over the weekend the South Koreans seemingly judged they had bigger fish to fry, given Washington's apparent willingness to engage in talks with Pyongyang to end the North's nuclear weapons program. And so Seoul — the world's third-largest exporter of steel to the United States — has agreed to reduce those exports by 30 percent, essentially agreeing to a quota in return for an indefinite exemption from tariffs.

Trump had previously critiqued a U.S. trade deal with South Korea. Now it seems he has managed to force through alterations to the agreement known as KORUS, including improved albeit largely hypothetical access for U.S. carmakers to South Korean consumers, after threatening tariffs that many trade experts believe fall foul of WTO rules. For a multilateral system this of course constitutes a bad precedent, and even the South Korean trade minister said he foresees further trade risks so long as Trump remains in the Oval Office.

All of this will be instructive for Europe, where leaders like Emmanuel Macron of France have said the American government would not force the trading bloc back to the table to renegotiate trade agreements through blackmail. Macron, Germany's Angela Merkel and Malmstrom have all said Europe would be more than happy to participate in trade-related discussions with Washington that are conducted in good faith, and in accordance with WTO rules. But the bloc would not do so — in the words of the French leader last week in Brussels — "with a gun pointed at our head."

But, given Trump's previous criticism of the trade "imbalance" between the U.S. and Europe, and his focus on the behavior of, for instance, German carmakers, we should not be surprised if U.S. Trade Representative Robert Lighthizer and U.S. Commerce Secretary Wilbur Ross seek to reopen discussions about specific European export products.

China, which now faces more than $60 billion of separate U.S. tariffs and has finally announced its own response to the steel tariffs, is clearly an entirely separate story, and perhaps the one that market participants will follow most closely of all.