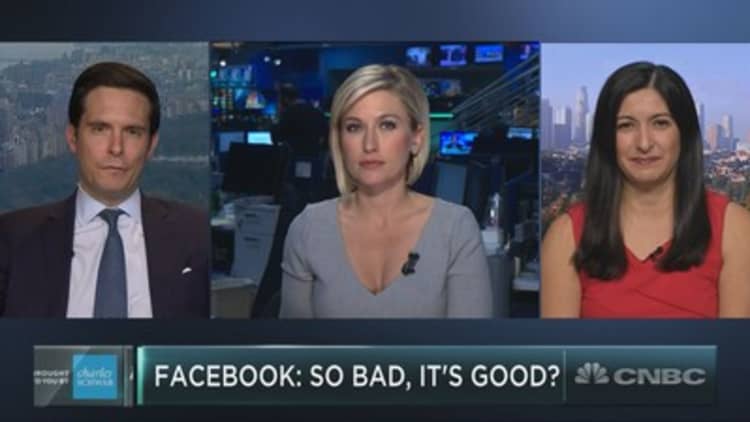 Facebook took another blow on Monday, swinging back into bear market territory and accelerating year-to-date losses. The wave of selling could turn in Facebook's favor, says one market technician.

"Put volume on Facebook is at a record high right now, so people have turned very bearish on the stock. You tend to get a positive response from that," Chris Verrone, head of technical analysis at Strategas Research Partners, said on CNBC's "Trading Nation" on Thursday.

Facebook appears to be defending its $150 to $155 level and could rally back up to $170 to $175, says Verrone. A bounce back up to at least $170 would mark a roughly 10 percent rebound from current levels. Facebook has not closed above $170 since March 19, the first trading day after news broke of its Cambridge Analytica privacy scandal.

Based on how other companies performed when facing regulatory threats, gains in Facebook after an initial rebound could prove elusive, says Verrone.

"You tend to get a big break in price. The stock then tends to rally over a period of weeks and then really it's dead money over the next year or so," he said.

Tobacco company Altria saw a similar pattern in the late 1980s and early 1990s when the industry came up against stricter government guidelines. Facebook could see a similar trading pattern, according to Verrone.

"What we learn from Altria is while ultimately regulation was actually bullish for the stock down the road, it did take basically 12 months of the stock trading like dead money before it could resume higher," said Verrone. "That's probably not the worst road map for Facebook going forward."

For Gina Sanchez, CEO of Chantico Global, the fundamentals case paints a dire picture for Facebook even beyond the next 12 months.

"What we have here is really broader than just a privacy issue. This is a business model issue," Sanchez told "Trading Nation" on Thursday. "You're looking at a lower potential rate of earnings going forward if, in fact, they have to substantially change their business model."

Analysts currently anticipate steady earnings growth over the next five years, according to data compiled by FactSet. Adjusted earnings are expected to grow just 4 percent in 2018, but should then pick up to 21 percent growth in 2019 and 2020. Estimates could be revised lower once the scandal's impact on advertiser dollars is better realized.

Even the broader technology sector is subject to risk, says Sanchez. This increased regulatory and consumer scrutiny could make high sector valuations difficult to justify.

"It is the most highly valued sector out there," said Sanchez. "In light of what could be a changing business model for not just one company but many companies I do actually think that that multiple could be taken down."