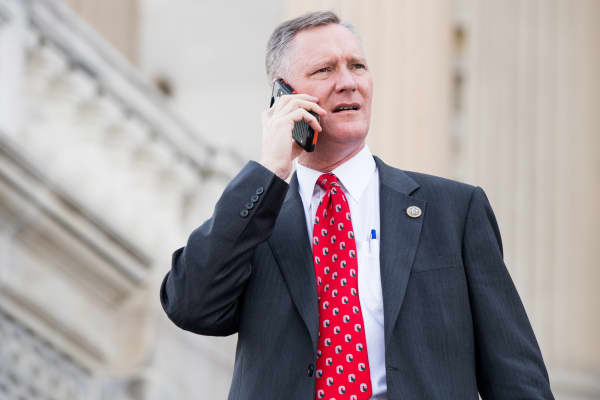 As the battle heats up for control of Congress, primary contests across the nation are drawing large pools of money from long distance donors who are shaping the outcome of key races.

Nearly 2,700 candidates are vying for one of the 435 U.S. House seats up for grabs in November. So far, they've raised more than $800 million for their campaigns, according to the latest data from the Federal Elections Commission. Though it's still early in this year's midterm cycle, roughly two-thirds of that money has come from outside those candidates' districts.

Of the 41 seats in the four states holding primaries Tuesday, candidates in more than half those districts have collectively raised more than $1 million. 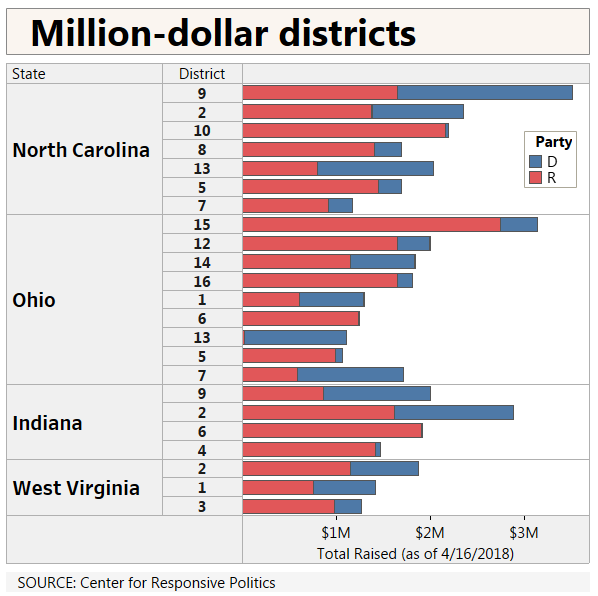 The midterm cycle enters a critical stage in the coming weeks as primaries in dozens of states begin to winnow down a pack of thousands of congressional hopefuls to a relative handful of contenders.

The first of a series of multistate primaries is set for Tuesday, when candidates face off in Indiana, Ohio, West Virginia and North Carolina. Most congressional districts in those states largely favor Republicans in the November elections.

More than 60 people have signed up to run for North Carolina's 13 congressional seats, where Republicans currently hold 10.

Most of Ohio's 16 districts are also considered "safe" for the incumbent party, four of which are held by Democrats. The wild card race could come out of a special election set for August in Ohio's 12th, which is currently vacant.

Indiana's House delegation consists of seven Republicans and two Democrats; all of those seats are considered "safe." So are West Virginia's three GOP seats.

Both states have a number of hard-fought races to determine who will get their party's nomination to run for those seats. Here are five races to watch:

In Ohio's 15th Congressional District, GOP incumbent Steve Stivers has one of the biggest campaign war chests among this cycle's House candidates, with nearly $2.8 million in direct contributions as of the end of the first quarter. Stivers has raised much of that from long distance donors; of the money raised among individual contributors, nearly 80 percent came from outside the district, according to the Center for Responsive Politics.

Stivers, a member of the House Financial Services Committee, has raised nearly two-thirds of his campaign cash from political action committees. More than $500,000 in donations have come from PACs representing the insurance, securities, real estate and banking industries, according to CRP.

As of the end of the first quarter, Neal had raised about $400,000; no data was available for Jarvis. 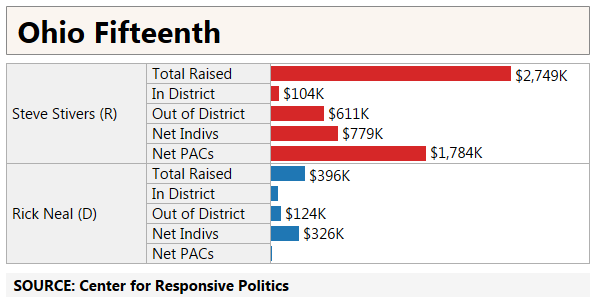 On the right, Pittenger is fighting a repeat challenge from Harris, who lost the 2016 GOP primary by a slim margin.

Democrats see an opportunity to flip the downstate seat, which stretches along the South Carolina line between Charlotte and Fayetteville from red to blue.

The Democratic Congressional Campaign Committee has put the district on its 2018 target list. Democratic megadonor Tom Steyer has been among McCready's biggest financial backers, pledging more than $1 million to his campaign, according to Ballotpedia. 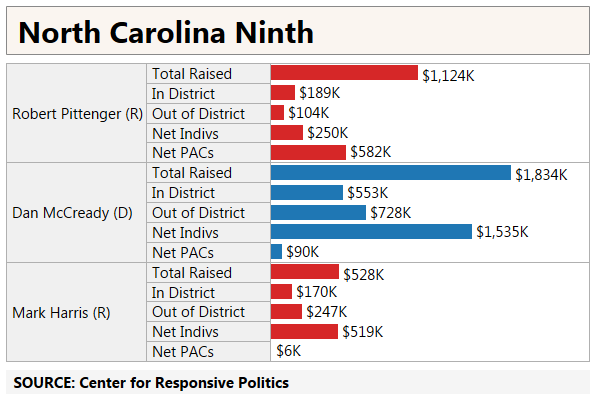 Five districts in the four states holding primaries Tuesday have fielded large packs looking to fill seats left open by members who have resigned or who plan to retire. One of the most crowded races is in Ohio's 12th District, a midstate district just north of Columbus.

The seat opened up for the first time in 18 years when incumbent Republican Patrick Tiberi resigned in January, sparking a stampede of nearly two dozen candidates, according to FEC records. The winners of Tuesday's Democrat and Republican primaries will face off in August in a special election to fill the seat until January 2019.

But that's not the end of the story. The same two candidates will face off again in November in the general election to serve the two-year term that begins that month.

On the Republican side, the field includes state Sen. Troy Balderson, businesswoman Malanie Leneghan, conservative economist Tim Kane, the top three fundraisers as of the end of the first quarter.

Franklin Country recorder Danny O'Connor, 31, has raised the most cash among the seven Democrats in the race, but he has a much smaller campaign fund than his GOP rivals.

The seat, which went for Trump in 2016, is considered safe for Republicans. 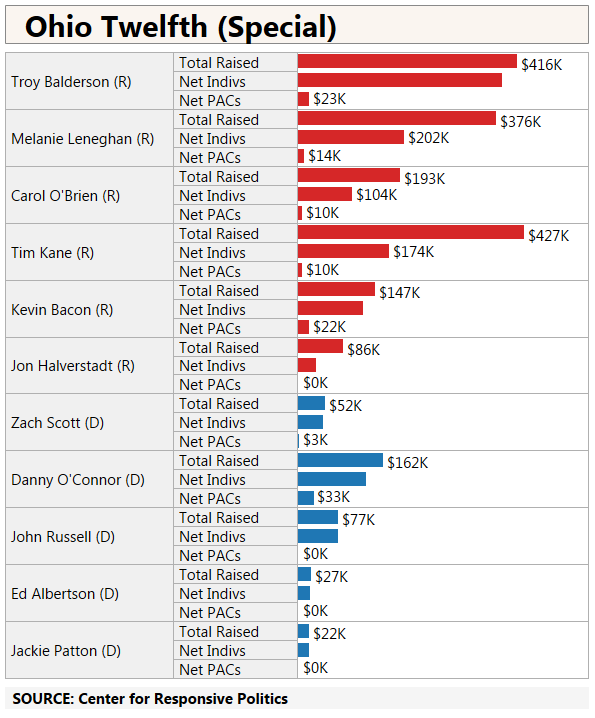 Democrats have not had much luck raising money for this solidly Republican district, which Trump carried by 40 points in 2016. But Republican businessman Jonathan Lamb has raised more than $800,000 — mostly from his own pocket — to challenge Greg Pence, a Columbus businessman who is running to win the seat once held by his younger brother, Vice President Mike Pence.

Greg Pence's House race has drawn the attention of national donors; about half of the $1 million he had raised as of the end of the first quarter came from outside the district.
Aside from his brother, Pence has also picked up key GOP endorsements form House Majority Leader Kevin McCarthy of California and House Majority Whip Steve Scalise of Louisiana. 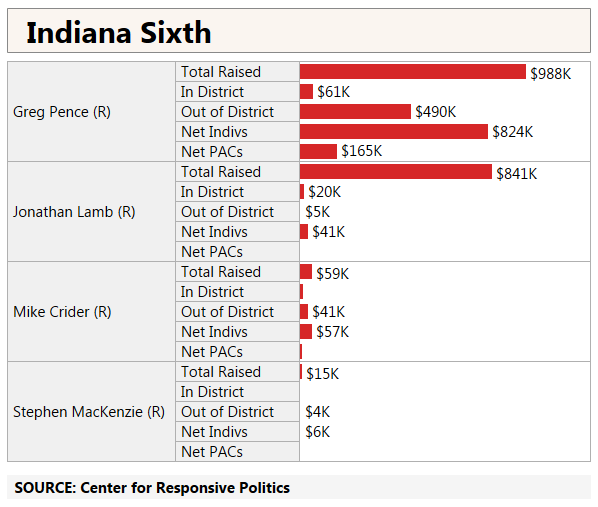 It's unlikely this solidly Republican seat will flip parties, but it's less clear which of the GOP candidates in the race will appear on the ballot in November.

The seat opened up last year when incumbent Evan Jenkins decided to run for U.S. Senate against incumbent Democrat Joe Manchin. Since then, the race has drawn several Republicans who have aligned themselves with policies pursued by President Donald Trump, who won the district in 2016 by nearly 50 points.

As of the end of the first quarter, Carol Miller, a member of the state House of Delegates, had raised roughly as much as her next two best-funded GOP rivals, state Delegate Rupert Phillips Jr., and Conrad Lucas, a former state party chairman. 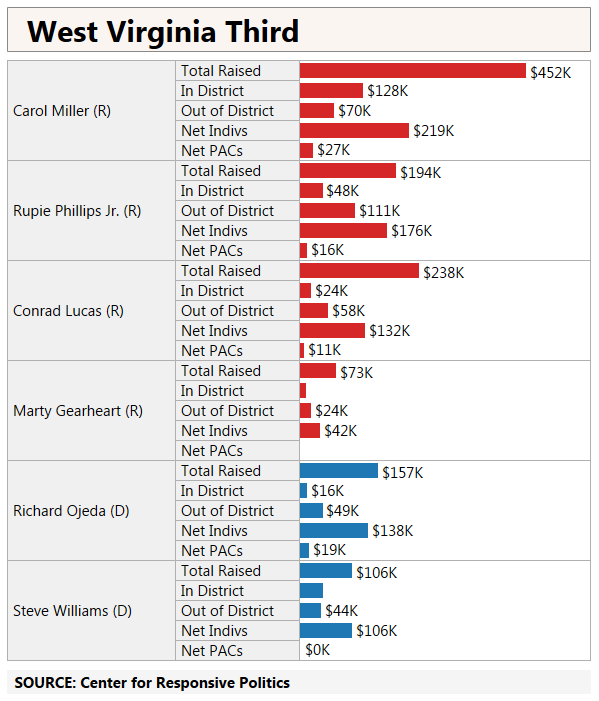