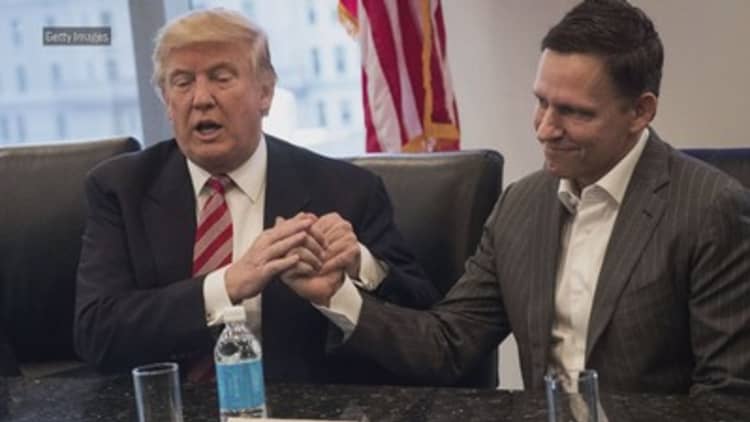 Venture capitalist Peter Thiel hasn't made a significant financial mark during the early stages of the 2018 congressional midterm election cycle, leading some allies of President Donald Trump to believe his absence so far could be related to how he's been treated by senior White House officials.

Trump allies are worried Thiel might not contribute to Republican candidates during the rest of the midterm race, according to sources who spoke to CNBC on the condition of anonymity. Several senior Trump advisors, including son-in-law Jared Kushner, according to sources, have been giving the cold shoulder to Thiel, who was one of Trump's most prominent backers in the 2016 election campaign.

Kushner, the leader of the White House Office of American Innovation, has, at times, ignored Thiel's phone calls, sources said. The billionaire investor's advice on technology and anti-regulation initiatives also is often ignored, said people close to the White House.

"Nobody is listening to him," one source said. "In a way he's been abandoned and I'm sure he's angry about it."

The White House did not return repeated requests for comment. A spokesman for Thiel declined to comment on the matter.

After Trump defeated Hillary Clinton, many close to the president-elect thought more of Thiel's colleagues would get top posts within the administration, as a reward for his loyalty.

So far Thiel's former chief of staff, Michael Kratsios, has been granted a position – as a deputy chief technology officer, as has Kevin Harrington, the former managing director of Thiel Macro LLC. Harrington was named to the senior staff of the National Security Council in February.

Trump confidants worry that the lack of Thiel-linked appointments could be a reason the Silicon Valley giant has yet to show his support for GOP candidates as Republicans try to hold on to majorities in the House and Senate this fall.

Thiel does not usually contribute in first quarters

For his part, however, Thiel usually limits his campaign contributions during the first quarters, and 2018 has been no different. Thiel didn't contribute at all in the first quarter of 2017 and started donating in the second quarter, when he shelled out $5,000 to the political action committee of Facebook at the end of April. He was an early investor in the social media behemoth and serves on its board.

Peter Thiel, co-founder of PayPal, delivers a speech during the evening session on the fourth day of the Republican National Convention on July 21, 2016 at the Quicken Loans Arena in Cleveland, Ohio.
Getty Images

The last time he contributed was in November of last year, when he gave $33,900 to the NRCC and $44,300 to House Majority Leader Kevin McCarthy's joint fundraising committee, the McCarthy Victory Fund.

During the 2016 election, Thiel gave $1 million to the pro-Trump super PAC Make America Number 1 and $250,000 to the Trump Victory committee. He was also a featured speaker at the 2016 Republican National Convention, where Trump was formally nominated.

He has yet to donate to any of Trump's re-election campaign committees.

The one potential saving grace for Republicans is Thiel's ongoing relationship with Trump himself.

In recent interviews, Thiel offered a mix of criticism and praise for the administration, but continued to say he supports Trump's efforts.

"There are all these ways that things have fallen short," Thiel told The New York Times in March, while also noting he does not regret his endorsement of Trump.

In a separate interview he seemed to blame political gridlock in Washington for disappointing results.

"It's very hard to get things to work in this country," he said. "Obviously there are all sorts of things that are somewhat disappointing — and at the same time, I don't know how much one can expect," he added.

Thiel also noted that he believes Trump will win re-election in 2020 but offered a caveat: "if he runs." 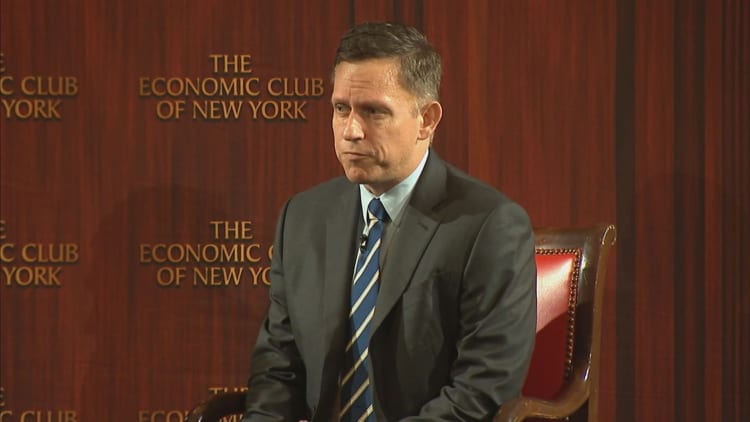