Trump will never reach 'perfect' deal with North Korea. Here's what a summit might accomplish 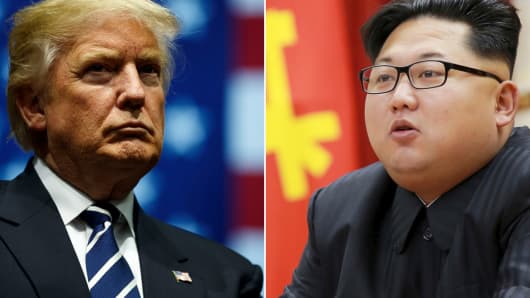 The atmosphere surrounding the June 12 summit between President Trump and North Korean leader Kim Jong-un—and whether the summit will even take place—has become a game of "will they or won't they?" American and North Korean diplomats have engaged in days of careful preparation, culminating in a trip to New York City by a high-ranking North Korean official for the first time in 18 years.

On Friday, Trump told reporters that the summit was back on for June 12.

All of this diplomatic movement is quite impressive from an historical standpoint. But a summit would mean zilch if both sides are unable or unwilling to arrive at a consensus about the substance—and the substance is exactly where the negotiations are likely to hit a series of roadblocks.

At it now stands, the bottom line positions of Washington and Pyongyang are so far apart as to be practically irreconcilable. Any talks between the U.S. and North Korea may very well depend on whether President Trump is open to settling for a package of measures from the North Koreans that is less than the ideal of a total, complete, and relatively quick denuclearization.

Kim Jong-un will have to engage in a little flexibility as well—recognizing that a suspension of U.S. sanctions and a statement of intent in support of a comprehensive peace treaty will likely be the best his regime can get if he is intent on maintaining a small nuclear arsenal. .

"Critics would likely argue that Kim Jong-un is too dangerous, unpredictable, and threatening to have even a single nuclear weapon at his fingertips."

Asked by CBS News to define what denuclearization means, Secretary of State Mike Pompeo was unequivocal: "Total. Full. Complete." This includes not only the destruction of every single North Korean nuclear weapon, but the demolition of all enrichment facilities and plutonium reprocessing plants.

Asking the North Koreans to uproot the entirety of their nuclear weapons infrastructure and swallow the indignity (in their minds) of removing themselves from the nuclear club will be incredibly difficult for the Kim dynasty to stomach.

Indeed, the Trump administration is essentially betting the house on the best, but least likely outcome. The White House is setting itself up for failure by classifying anything short of complete, verifiable and irreversible dismantlement (CVID) as a losing hand. To take the analogy further, President Trump is a poker player putting all of his chips at the center the table and hoping for the royal flush.

But like every good gambler, the president should be open to other winning combinations. A permanent, verifiable termination of Pyongyang's weapons of mass destruction programs would be the gold standard. Yet the gold standard is often out of reach. There are other possibilities short of that high threshold that would not only be a boon to the cause of global nuclear nonproliferation, but would allow the United States to walk away from the negotiations as a winner.

What would a possible deal along these lines look like?

One example could include an interim accord whereby Kim Jong-un surrenders a portion of his nuclear warheads to the United States in exchange for a temporary suspension of U.N. Security Council sanctions and the establishment of a U.S. interests section in Pyongyang.

The North Koreans would be permitted to retain a small nuclear arsenal for deterrent purposes, but only on the condition that the Kim regime commits and implements a nuclear and missile test freeze; a suspension of warhead, intercontinental ballistic missile production, and plutonium-reprocessing; and a cap on the quantity and quality of the enriched uranium its scientists can produce.

Such an arrangement would be impossible to verify without a vigorous and unfettered inspection regime from the International Atomic Energy Agency, so Washington would need to make it abundantly clear to the North Koreans that the deal would be off without its full cooperation.

This smaller-scale agreement would serve as a valuable placeholder on the way towards more intensive negotiations in the future, all the while forcing Pyongyang to demonstrate to the international community that it is in fact willing and able to meet its commitments.

Critics would likely argue that Kim Jong-un is too dangerous, unpredictable, and threatening to have even a single nuclear weapon at his fingertips. Those arguments, however, are founded upon a cartoonish interpretation of Kim.

Viewing him through that prism is not only a complete misunderstanding and a gross exaggeration, but a dangerous assessment that could lead the U.S. to a rash preventative military strike. Kim may be a tyrant to his people and a rogue to his neighbors, but his actions over his first seven years as leader consist of a man much more interested in keeping himself at the top of the system than rushing into a war of choice with the United States— a war he would inevitably lose.

Many tend to forget that North Korea has been a nuclear weapons state since 2006 and that the United States has managed to deter Pyongyang from using its nuclear capability since then. Unless the Kim dynasty is suicidal—and there is no evidence to date that it is—Washington can effectively deter North Korea indefinitely just as it successfully deterred the far more powerful Soviet Union and Communist China during the Cold War.

Trump, a man who loves to make deals, may sooner or later realize that CVID is an unattainable goal and that his choices may come down to walking away or crafting an agreement that—while not perfect—is preferable to no deal at all.

Commentary by Daniel DePetris, a fellow at Defense Priorities.