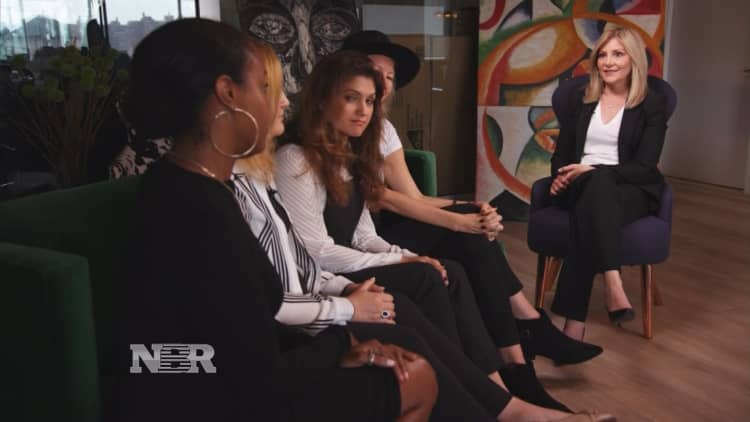 From its start, the world of cryptocurrency has been dominated by males. In fact, men make up more than 91 percent of the bitcoin community, according to Coin Dance, a community for those interested in bitcoin.

But now, women are trying to change that.

“There’s a lot of wealth being generated, and a lot of times we're left out of the conversation. It's left to the males, the husbands, the partners, significant others, etc. But it's just as easy for us to get involved,” said Shanah Walton, an investor in crypto.

Walton calls herself the “Bitcoin Bombshell” and believes women can bring a lot to the space.

"My primary goal is… to promote diversity in the space, and get women involved and let them know it's not as hard or as nerdy or as techy as you would think it is," she said.

Walton is part of a weekly meet-up in New York City for women to share ideas and learn how to invest.The women gather over breakfast at a co-working space. CNBC was invited to attend a meeting which was packed with women of all ages and from all walks of life.

Women discuss cryptocurrency over breakfast at a meeting in Manhattan.
CNBC

“The more and the more women that are getting into this space, the more excited they get and they understand at first that it's easy. It's totally doable. There's no magic thing that is going on that it's in difficult or more challenging for women,” said Erika Mouynes, a partner at Pixbae, a fintech advisory firm,who spoke at the meetup.

“I'm in the hospitality industry. That's my background for the past 12 years. So I have no financial experience, but I've been able to be very successful in the space,” Walton said.

Meredith Davis is a former US Marine and worked in government for years. Now, at 7 months pregnant, she is working in crypto.

“I had to go through mentally and realize that a lot of the barriers to entry that I thought existed were either remembered from times that don't really apply anymore,” Davis said.

Many of the women at the meeting were moms.

“Most people I think that I've interacted with are working from home or a coffee shop or wherever is most expedient. So for moms, that's a huge opportunity,” Davis said.

Moms say crypto gives them flexibility not found in other industries.

“It’s a global market. It’s 24 hours. So after the kids go to bed, you can get on your computer and do anything,” Walton said.

Walton says she enjoyed working in hospitality, but that moving to crypto let her set her own hours and become self-sufficient.

Davis and Walton are not the only moms jumping in. Marilyn DeLucenay started Crypto Moms, an online forum to get more women interested in crypto 4 years ago.

Crypto Moms, an online forum for women to learn about cryptocurrency.
CNBC

“Ninety to 95 percent of the people that were involved or have been involved in the cryptocurrency have been men. And it's time that women started showing up to the table and become involved much more than they have been,” DeLucenay said.

Crypto Moms currently has 50,000 members and has seen membership grow by 25 percent, according to DeLucenay.

The growing numbers are leading to increased confidence.

Perianne Boring, the founder and president of the Chamber of Digital Commerce, speaks at the DC Blockchain Summit in March.
CNBC

“For all of the women out there who have either wanted to enter this industry, who want to build in the blockchain ecosystem, who have faced misogyny or criticism, or have been trolled on social media, or made to feel like they weren't smart enough or good enough for any reason, you can do this,” said Perianne Boring, the founder and president of the Chamber of Digital Commerce, a blockchain advocacy organization.

Boring said in order for the industry to grow, more women are needed. “We're building the next level of the internet. A new operating system for government and society. And it takes all hands on deck to make this work.”