Wells Fargo reported lower revenue and profit for the second quarter, falling short of expectations as it tries to move on from its regulatory issues.

The bank said Friday that earnings per share were 98 cents on a GAAP basis, including a 10 cent per share tax expense. Not counting that expense, EPS of $1.08 fell short of Wall Street's $1.12 estimate for the quarter.

Revenue came in at $21.55 billion. Wall Street had expected revenue of $21.677 billion, according to Thomson Reuters. Net income of $5.19 billion was also shy of expectations, which called for net income of $5.47 billion. 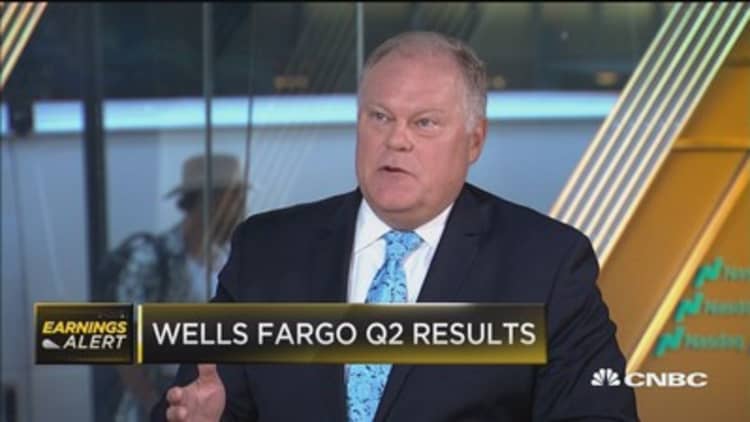 The bank has been under pressure for several quarters because of multiple probes into its sales practices. Two years ago, the scandal burst into the public eye when it was disclosed that retail bank employees had created fake accounts in customers' names to meet sales targets. Sales issues later emerged in other businesses, such as auto lending and mortgages.

Wells Fargo named Tim Sloan as its chief executive in late 2016 to clean up the mess, and earlier this year, the Federal Reserve slapped a cap on Wells Fargo's assets, telling it to improve operational controls. Last month, the Fed gave the bank the go-ahead to buy back $24.5 billion of its stock, more than double the amount it bought last year, and raise its quarterly dividend 4 cents to 43 cents a share.

"The broad-based weakness of Wells Fargo’s results is troubling, with many indicators such as deposits, commercial and consumer lending trending down. It appears that the slew of scandals that Wells Fargo has been involved in are taking their toll," said Octavio Marenzi, CEO of capital markets management consulting firm Opimas. "Compared to JPMorgan’s excellent results earlier today, Wells Fargo is looking rather hapless, unable to get it right."

Wealth management revenue fell 6.5 percent and net income was down 37 percent. Wealth management results were affected by an impairment charge related to its majority stake in the investment firm RockCreek Group, which it sold back to the founder, the bank said.

Shares of Wells Fargo are down more than 8 percent this year.

Wells said it had state income tax charges of $481 million, related to a recent Supreme Court ruling regarding e-commerce sales (South Dakota v. Wayfair) that said states can charge taxes on purchases from out-of-state sellers even if the seller isn't located in that state. 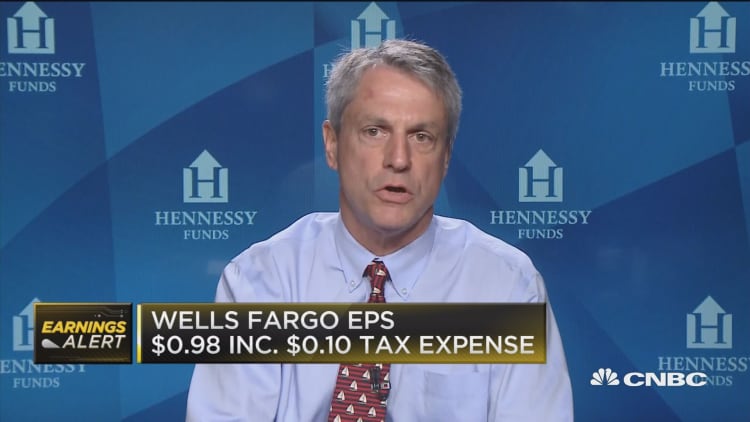