Polls this year show that Democratic voters have become "energized" enough to swing control of at least one branch of Congress in the coming midterm election.

But data from past midterm "waves" suggest that Democrats could be headed for a disappointing November.

There's plenty of reason for Democrats to be encouraged. To win back control of the House next month, they'll have to pick up a net gain of 23 seats. More than twice that number of districts are considered "tossups" by the major political pundits. 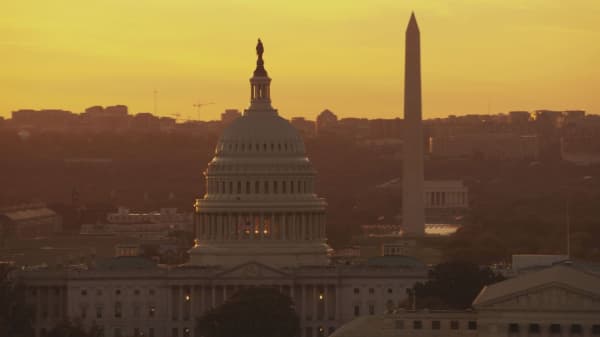 Analysts say the odds are longer that Democrats will pick up the net gain of two seats they need to win back control of the Senate. That's largely because most of the 35 seats up for re-election in 2018 are already held by Democrats.

Heading into the final weeks of the campaign, the latest "generic" congressional polls show an average spread of more than seven points, according to Real Clear Politics. That's a solid lead. But it has faded in recent weeks. And it may not be wide enough to bring about the kind of "blue wave" Democrats are hoping for.

To see how the current campaign compares with past midterm elections, CNBC looked at the polling data and election results from the last five midterms. Here's what we found:

Democrats have held a consistent lead in these generic congressional polls all year, but the gap has been narrowing in recent weeks. That may be because more Republicans are also getting "energized" by recent events, including the divisive debate over the nomination of Brett Kavanaugh to the Supreme Court.

A similar late campaign shift in the 2014 midterms helped Republicans take control of the Senate away from Democrats, with a net gain of 9 seats, midway through President Barack Obama's second term. In that election, Republicans expanded their control of the House by 13 seats. Democrats had been leading in generic congressional polls for much of the summer, but the advantage flipped to Republicans in the final weeks of the campaign.

Republicans saw their biggest "red wave" of the last two decades in the 2010 midterm, which gave them a net gain of 63 House seats, winning control back from the Democrats. Despite a more than 9 point average lead in the generic congressional poll, the GOP edge faded to just 6.8 percent in the final vote tally. And despite a net GOP gain of six seats in the Senate, Democrats held on to their slim majority.

The biggest "blue wave" of the last two decades came during George W. Bush's second term, when Democrats pulled an average 11.5 point lead in the general congressional poll, which translated into a 7.9 point margin in the total nationwide vote tally.

That gave Democrats a net gain of the 31 House seats and the 6 Senate seats they needed to flip control of both chambers of Congress.

Voters were most evenly divided in the 2002 midterms, when the margin in generic congressional polls flipped back and forth until the final days of the midterm campaign during George W. Bush's first term.

One reason congressional elections are so difficult to predict, based solely on national party preference polling, is that the party with the biggest vote turnout nationwide doesn't necessarily win the most seats in either the House or Senate.

That's not supposed to happen in the House, where congressional districts are carved up every 10 years based on the latest population data from the Census, in order to make each district cover roughly the same number of voters. But the resulting number of seats won by each party doesn't always reflect that party's share of total votes nationwide.

There are a number of reasons for this, including the longstanding practice of parties in power "gerrymandering" congressional district boundaries to lock in a partisan advantage. In recent elections, this has tended to favor Republicans. But over the last 75 years, Democrats have a longer track record of winning more House seats than their share of the overall national vote tallies.