William Barr told U.S. senators in his confirmation hearing for attorney general on Tuesday that regulators need to take a deeper look at the "huge behemoths" in tech.

"The purpose of the antitrust laws, obviously, is to protect competition," Barr, who previously served as attorney general in the administration of President George H.W. Bush, said in response to a question from Sen. Mike Lee (R-UT). Barr said that competition is ultimately good for consumers, but he suggested that he needs to look more into the topic.

"At the same time, I'm sort of interested in stepping back and reassessing, or learning more about how the antitrust division has been functioning and what their priorities are," said Barr. "I don't think big is necessarily bad, but I think a lot of people wonder how such huge behemoths that now exist in Silicon Valley have taken shape under the nose of the antitrust enforcers. You can win that place in the marketplace without violating the antitrust laws, but I want to find out more about that dynamic."

U.S. tech companies Amazon, Microsoft, Apple, Alphabet and Facebook are five of the six most valuable companies in the world. Over the past year, lawmakers have called for greater regulation of the industry as privacy and platform manipulation scandals have rankled Silicon Valley. Executives from Facebook, Twitter and Google have all testified in front of congress, about what they're doing to get back on track.

Barr made it clear in his testimony that he is interested in a number of issues pertinent to tech companies. In response to a question from Senator Josh Hawley (R-MO) about the Justice Department's role is in terms of working with the Federal Trade Commission to address anti-competitive behavior.

"I would like to weigh in to some of these issues," Barr said. "I'd like to have the antitrust [division] support that effort to get more involved in reviewing the situation from a competition standpoint. I also am interested in the issue of privacy. And the question of who owns this data. And, you know, it's not an area that I've studied closely or become an expert in. But I think it's important for the department to get more involved in these questions."

Barr acknowledged he still doesn't have the solutions to these questions, including about whether the Justice Department has the authority to address alleged bias on online platforms. He said he'd "have to think long and hard before I said that it was really the stuff of an antitrust matter." But he also expressed concern over the "network effects" that have allowed tech companies to become "so powerful that particular sectors could essentially be subsumed into these networks."

Whoever is confirmed as attorney general could play a key role in shaping the enforcement of antitrust regulation in the coming years.

Barr is plenty familiar with the topic, as he recently battled the Justice Department over the proposed merger of AT&T and Time Warner, where he was a board member. As part of the merger litigation, Barr filed an affidavit saying he was disappointed in the "inexplicable" opposition by the Justice Department's leadership given President Donald Trump's "prior public animus towards CNN and this merger," according to The Washington Post.

Barr has said that if confirmed he would recuse himself from the Time Warner-AT&T case. A lower court had approved the merger in June, but the Justice Department filed an appeal in July.

Hawley asked Barr if he sees "similar concerns" to those the Justice Department raised against the Time Warner/AT&T merger "regarding how Silicon Valley firms could use their market power and social media or search to discriminate against rival products or services and viewpoints." Noting that his response "has no application" to the merger case involving AT&T and Time Warner, Barr answered, "yes." 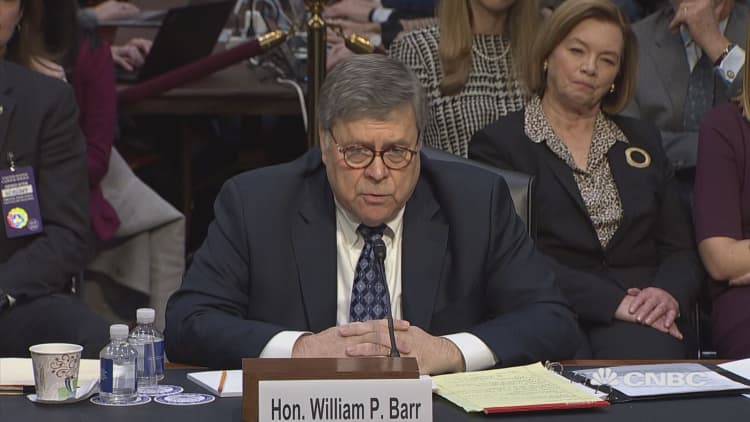