The U.K. faces yet more political turmoil Wednesday as another vote in Parliament could topple the government and leave a leadership vacuum at a crucial point in the country's history.

Lawmakers are debating a motion of no confidence in Theresa May's administration. A vote will follow in the evening which, should the government lose, could trigger a countdown toward a General Election.

The motion was tabled by the main opposition Labour leader, Jeremy Corbyn, who claimed the government's Brexit deal with Europe was now dead after its overwhelming rejection by politicians on Tuesday.

The vote of no confidence is an attempt by Corbyn to trigger a new General Election which would allow him a chance at seizing power as the next leader of the U.K.

Under the Fixed Term Parliament Act of 2011, Parliament's fixed five-year term can only be shortened in two ways.

First, if more than two thirds of the House of Commons vote to call an election — and that means 434 of the 650 lawmakers.

The second is Corbyn's plan. If his motion of no confidence tonight is passed by a majority, there is then a 14-day period in which to pass an act of confidence in a new government. If no such vote can be passed by Parliament, a new election of the British people must be held.

That election cannot happen for at least another 25 working days. 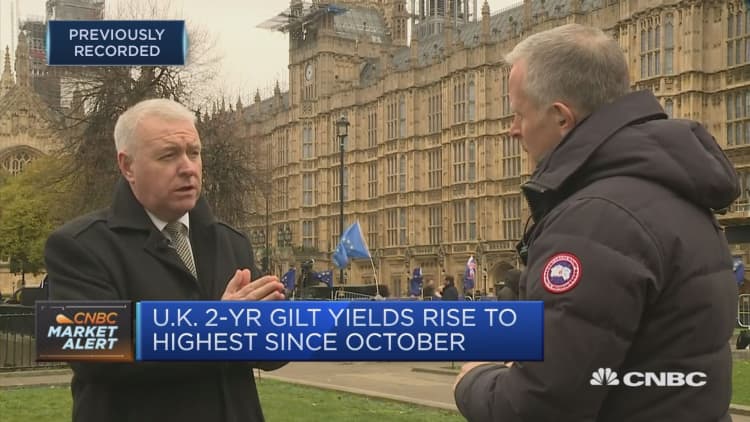 The forecast is that Labour's strategy will fail as, despite May's huge loss on her Brexit vote, enough members of her own party will vote for her government to remain in power.

Aside from Conservative lawmakers returning to the fold, the Northern Irish Democratic Unionist Party (DUP) that props up May's minority government has also said it will back her.

Apart from the Labour party, those expected to vote against May include representatives of Scottish and Welsh nationalist parties, Liberal Democrat lawmakers and the sole parliamentary representative of the Green Party.

U.K. Labour party Chairman Ian Lavery told CNBC's Steve Sedgwick Wednesday that a General Election was the natural next step for Labour and he argued that Wednesday's vote of no confidence in the government was not necessarily doomed to founder.

"I think we've got a chance you know, because there was 118 Tories (Conservatives) who voted against Theresa May last night," he said, claiming that not all of those who rebelled against the Brexit plan would fall back into line to support May.

"It is volatile. People are unhappy with the deal, so we think it is the optimum opportunity to put forward a vote of no confidence and call for a General Election." 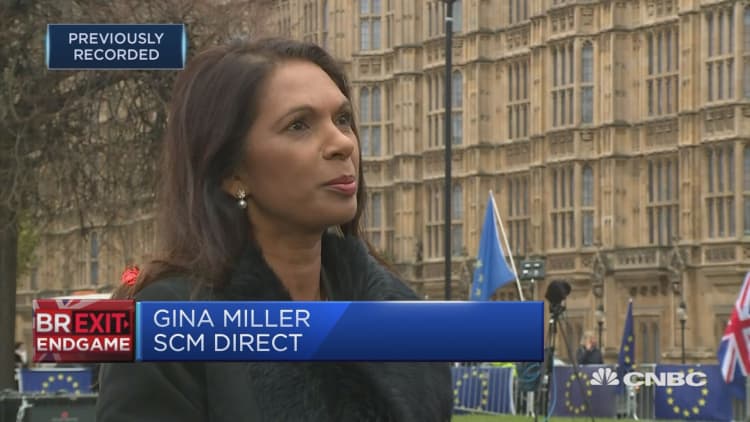 Gina Miller is an investment manager who rocketed to prominence after she successfully argued in court that the U.K. government could not begin the formal Brexit process without seeking approval from Parliament.

Speaking on Wednesday, Miller told CNBC's Steve Sedgwick that the vote of no confidence would likely fail and allow Parliament to remove one major possible outcome.

"Commentators expect this to not be successful, so at least you can say that a General Election is off the table," she said.

Miller added that any second referendum on Brexit should be a last option once everything else has been considered and rejected by Parliament.

"If you knock off the table 'Canada Plus' and there's no parliamentary majority for 'Norway,' then you are only left with remaining or leaving with no deal," she said before adding, "you have to go through the parliamentary process first, find out whatever is left, and then you go to the people."

"Canada Plus" is based on the free trade deal struck between Canada and the EU while Norway is tied to the EU's internal market without being part of the political union. Both models have been proposed, and decried, as solutions for the U.K.'s future relationship with the EU.

Miller, who is also co-founder of investment firm SCM Direct, said that her firm, and wider markets, were now pricing an extension to Article 50 — the period of time that Britain and the EU had to agree terms of withdrawal.

"Any of the solutions that look likely, require an extension and the markets are being cautious. Even if it is no deal and we go to WTO (World Trade Organization) terms, we don't have the time to get all the legislation requited by the 29th March," she said.