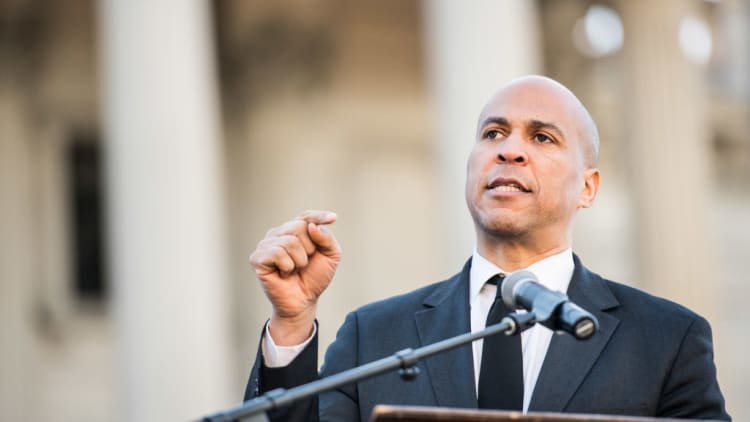 Sen. Cory Booker launched a bid for the Democratic presidential nomination on Friday.

He is the second black candidate to enter the race, following Sen. Kamala Harris of California. Friday is the first day of Black History Month.

Booker launched his bid with a video and an email to his backers in which he laid out his key issues without delving too much into policy specifics.

"I believe that we can build a country where no one is forgotten, no one is left behind; where parents can put food on the table; where there are good paying jobs with good benefits in every neighborhood; where our criminal justice system keeps us safe, instead of shuffling more children into cages and coffins; where we see the faces of our leaders on television and feel pride, not shame," Booker said.

The New Jersey Democrat's entrance into the race was widely expected. The charismatic senator and former mayor of Newark, New Jersey, has been crisscrossing key primary states in recent weeks while telegraphing that a decision was coming.

Booker, who served as mayor until he was elected to the Senate in 2014, is one of several Democratic senators, including Harris and Sen. Elizabeth Warren of Massachusetts, who have their eyes on the 2020 nomination. Sen. Bernie Sanders, an independent who caucuses with Democrats, is also expected to jump into the race following his failed bid for the party's nomination in 2016.

Booker, a liberal Democrat with ties to the business community, has been an outspoken critic of President Donald Trump.

He scored a crucial policy victory recently when Congress passed a major piece of bipartisan criminal justice reform that Booker worked closely with Republicans to advance.

Earlier in 2018, Booker, 49, took the spotlight during the contentious confirmation hearings for now-Justice Brett Kavanaugh when Booker dramatically threatened to release what he said were confidential documents but turned out not to be.

If Booker is elected president he will be the first bachelor sent to the Oval Office in more than 150 years.