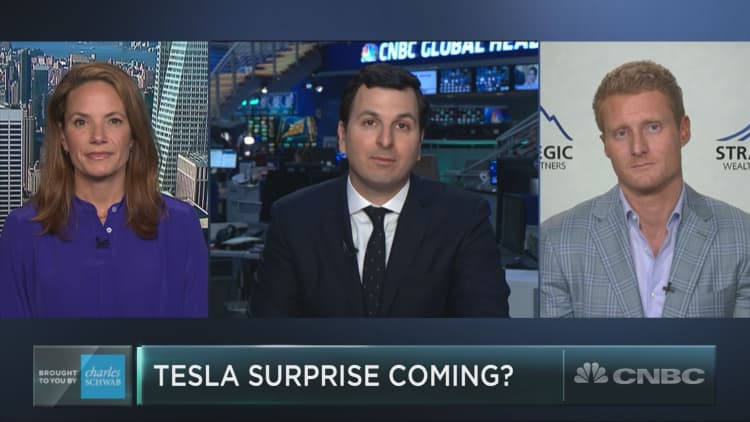 Tesla heads into its earnings report out after the bell Wednesday trading at its lowest level in six months.

One strategist said it should get even worse for the electric car maker.

"This is a company that has a cult following – people that believe that [Elon Musk] is changing the world – and that's the only reason this stock is trading at $260. There is no company that's better at overpromising and under-delivering than Tesla," said Mark Tepper, founder and president of Strategic Wealth Partners, on CNBC's "Trading Nation" on Tuesday.

Tepper said its true valuation should be even lower.

"If I were to believe Tesla's stories, with a 35% projected earnings growth rate, even at a PEG [price/earnings to growth] ratio that's at a premium to the market, you still can't value the stock at over $100 a share and $100 is on the very high end," he said.

A storm of headwinds are coming for the company, which could shake the stock, Tepper said. He mentioned an expiring tax credit, which could hurt demand, and increased competition, which means the company is jockeying for customers over price as well as quality.

"Quite frankly my biggest issue is management doesn't execute on what they say. I don't need management selling me a bill of goods. I want execution and you're not getting that from Tesla," said Tepper.

Tesla has not responded to a request for comment.

Following earnings, Katie Stockton, founder of Fairlead Strategies, said the company needs to hold one key level to prevent it from tumbling.

"There's a very strong support level right around $250 for Tesla so we really want to see that level hold to preserve the long-term neutral bias of the chart," Stockton said Tuesday on "Trading Nation." "The latest down move that we've seen has been significant. It has marked underperformance. It's very rare right now to see in the marketplace a stock that actually topped last December and this is one of those few, but we need some stabilization near support to get convinced that we have a basing phase in place for Tesla."

"I also feel like to me that the support is likely to hold because we have seen a slight loss of downside momentum," Stockton said.