A 2016 debate question about Hillary Clinton's support for a $15 per hour minimum wage sparked a spat between the former secretary of State and Sen. Bernie Sanders.

"If you're both screaming at each other, the viewers won't be able to hear either of you," CNN moderator Wolf Blitzer said after Sanders repeatedly jumped in to dispute how Clinton described her stance.

Clinton had backed only a $12 per hour federal minimum wage, though the former senator from New York noted that she "supported the fight for $15" at the state and local level in high-cost areas. Sanders had a different goal: "$15 in minimum wage in 50 states in this country as soon as possible."

Only three years later, disagreements over hiking the $7.25 per hour U.S. wage floor have all but vanished in the 2020 Democratic primary. All of the leading contenders for the Democratic presidential nomination — from self-proclaimed democratic socialist Sanders to the more centrist former Vice President Joe Biden — have backed a $15 per hour federal minimum wage.

Buoyed by activists who helped to push seven states to enact $15 wage floors, Democratic candidates have tossed aside caution about a sweeping nationwide minimum wage hike. As they vie with President Donald Trump for support from working-class voters, the party hopes a more direct action to boost pay will be more appealing than Trump's approach: leaving minimum wage decisions to states and hoping economic growth will cause pay increases.

In a race that will test whether a strong economy can save a president with a poor approval rating, Democrats see raising the pay floor as one way they can cast themselves as a better alternative to fatten workers' wallets.

Raising the minimum wage "speaks so clearly and directly to trying to resolve that problem, it is going to resonate even to folks who are going to be conservative on other issues," said David Cooper, a senior economic analyst at the Economic Policy Institute, a left-leaning think tank that studies how policy affects low and middle-income people.

A White House spokesman did not immediately respond to questions about the president's stance on the U.S. minimum wage. But Trump has previously argued the federal government should let states decide the wage floor.

Democrats will have to counter the narrative the Trump campaign has already tried to enforce: That the tax cuts and regulatory relief he championed have boosted economic growth and wages — without an increase in the federal pay floor.

"Wages are rising at the fastest pace in decades and growing for blue collar workers, who I promised to fight for, they're growing faster than anyone else thought possible," Trump said during his State of the Union address in February. (Though wage growth adjusted for inflation picked up earlier this year, Trump's claim that it was the highest in decades is unfounded, according to the Associated Press).

The last federal minimum wage hike took effect roughly a decade ago in July 2009. Proponents of raising the pay floor to $15 an hour argue in part that paychecks have "barely budged" and that workers everywhere — "not just on the coasts" — need it to survive, said Paul Sonn, director of the National Employment Law Project Action Fund. But opponents worry $15 is too drastic an increase in parts of the country and would force employers to slash positions and hours.

Cities and states, spurred in part by labor activists led by the Fight for $15 group, have changed the narrative on minimum wage hikes in recent years. Twenty-nine states and Washington D.C. have pay floors higher than $7.25 per hour. This year alone, New Jersey, Illinois, Maryland and Connecticut passed bills to gradually raise their minimum wages to $15 per hour, joining New York, California, Massachusetts and D.C.

Experts on the minimum wage say the flurry of hikes at the state and local level helped to make a $15 per hour minimum wage more palatable for candidates beyond the liberals in Sanders' mold. The views of Biden and the Obama administration largely reflect the mainstream Democratic thinking on the minimum wage in recent years.

President Barack Obama first proposed a $9 per hour federal minimum wage in his 2013 State of the Union. His administration then backed congressional Democrats' bill to raise the pay floor to $10.10 later that year. By 2015, the White House supported a Democratic proposal for a $12 minimum wage.

In September 2015, Biden joined New York Gov. Andrew Cuomo as he made the case for a statewide $15 per hour minimum wage. By the time he launched his 2020 presidential campaign in late April, Biden argued "it's way past time we make a $15 minimum wage the law of the land."

Biden tweet: Companies continue to squeeze every last penny out of workers, making it harder and harder for Americans to make ends meet. It's way past time we make a $15 minimum wage the law of the land.

In the absence of federal action, activists have also pushed massive employers to hike their pay. Amazon and Target, for example, have taken steps to increase their minimum wages to $15 per hour. Amid pressure from Sanders — who appeared at Walmart's annual meeting Wednesday and accused the retailer of paying "starvation wages" — Walmart CEO Doug McMillon called on Congress to hike the federal minimum wage, which he called "too low." 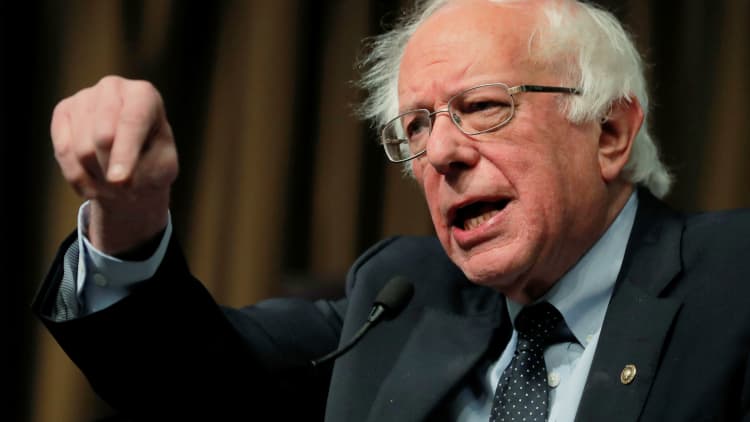 Congress now sits closer to a minimum wage hike than it has in years. The Democratic-held House could vote as soon as this month on a bill that would gradually increase the U.S. pay floor to $15 per hour.

Party leaders have to overcome skepticism within their own caucus first. Thirteen Democrats led by Rep. Terri Sewell of Alabama introduced a bill in April to set varied minimum wages based on regional cost of living, which would increase to $15 per hour at different paces.

"The PHASE-in $15 Wage Act establishes a regional minimum wage structure that provides all minimum wage workers with a much-needed raise while protecting jobs, giving every community the flexibility to grow their economy and taking into account that the cost of living in Selma, Alabama, is very different than New York City," Sewell said in a statement introducing the legislation.

Even if Democrats can get a minimum wage hike through the House, any legislation will face a tough path to approval in the GOP-held Senate.

Wage hikes and the economy

The concerns Sewell and some Democrats have about a blanket $15 per hour minimum wage are common ones. Critics worry businesses in some areas that currently have relatively low pay or cost of living will struggle to take on the costs from the pay increases. A $15 wage "would be incredibly disruptive" in parts of the country, said Michael Strain, director of economic policy studies at the right-leaning American Enterprise Institute.

So just how have the recent minimum wage increases affected workers and the economy? 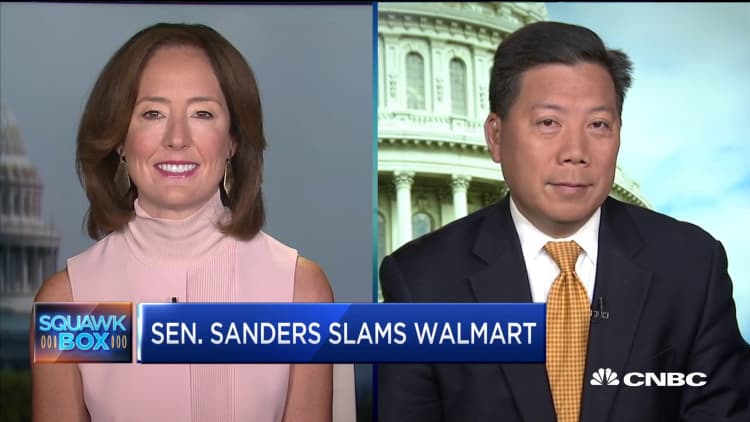 It appears minimum wage hikes — along with a tightening labor market — have helped to drive pay higher at lower U.S. income levels. After a period of stagnation, wages for all employees after accounting for inflation started rising in recent months: They increased 1.2% in April from the previous year, according to the Labor Department.

But minimum wage workers appear to have fared better than all employees. Average wages for the bottom third of earners climbed by an average of 2.3% annually over the last three years after accounting for inflation, Ernie Tedeschi, the head of fiscal analysis at Evercore ISI, wrote in April. He added that "the growth pressure from the wages of workers at or just around the minimum wage can account for between a quarter to a third of this growth."

Tedeschi estimates that the effective minimum wage — when considering federal, state and local laws — is actually about $11.80 this year.

While minimum wage hikes appear to have lifted pay for numerous workers, Strain notes that assessing the effects of a $15 per hour minimum wage, specifically, is still difficult. While states and cities have passed laws to increase their pay floors to that level, a $15 wage will not actually take effect for years in many areas.

Dramatic minimum wage increases have always brought fears of trade offs. Critics have said hiking the pay floor could reduce the number of hours worked, even if pay during those hours rises. Strain says "only people who are employed earn wages."

One recent study suggests a major pay floor increase affected hours at the local level. Seattle's minimum wage increase to $13 per hour — part of the city's path to a $15 pay floor — reduced hours worked in low-wage jobs by 6% to 7%, according to a May 2018 National Bureau of Economic Research working paper.

Regardless of potential drawbacks, Democrats are set on using the minimum wage as a remedy for the Trump economy's flaws in 2020. The push for a $15 minimum wage will go beyond the presidential contest into certain House and Senate races as Democrats and Republicans vie for control of both chambers.

Top Democrats used the nonfarm payrolls data for May, released Friday by the Labor Department, as another opportunity to stump for a $15 pay floor. The report showed worse than expected job creation and slowing wage growth.

"Today's jobs report suggests that American workers are being put at risk by the president's erratic economic policies," Rep. Bobby Scott, a Virginia Democrat and chairman of the House Education and Labor Committee, said in a statement Friday. "The report also shows that workers' wages are still not keeping pace with the rising cost of living. Congress must take action to ensure that all Americans can enjoy the benefits of economic growth."