Aphria interim CEO Irwin Simon said Monday that the biggest opportunity that he sees in the Canadian cannabis market is converting consumers from the black market to the legal one.

The Canadian cannabis company, which has about a $1.8 billion market cap, makes and sells medical and recreational marijuana in that country. Canada legalized the weed business in October 2018.

In its earnings report last week, Aphria reported a sales beat and positive earnings before interest, taxes, depreciation and amortization, known as EBITDA, in its fiscal fourth quarter. Net revenue came in at $128.6 million, which topped analyst expectations of $103.5 million.

Aphria does not sell any of its products in America, where marijuana is legalized in some form in more than half of the 50 states and the District of Columbia.

Simon did not say whether his company has plans in the near term to enter the U.S. market, but he argued that the firm has become one of the leaders in the worldwide $150 billion cannabis industry. He said that companies like Constellation Brands, which has a large stake in Canopy Growth, and Altria, which has invested in Cronos, are getting into the growing marijuana business as its popularity among millennials grows.

"Because they're looking at that cannibalization of where THC and where cannabis is going to bite into sales," Simon said. "We know consumers are drinking less alcohol … and you look at millennials today it's more and more cannabis consumption out there."

Simon, who founded organic and natural products company Hain Celestial Group in 1993, echoed Cramer's sentiment that investor focus on the industry has changed as shareholders expect to see results. Most marijuana companies, Cramer pointed out, have yet to produce positive results, which explains why the cohort has seen their share prices come down in recent weeks.

Aphria forecasts sales for the 2020 fiscal year to come in between $650 million and $700 million, above analyst estimates of $639 million, according to FactSet. The business is growing in the European market as well, Simon said.

"This industry used to be about who can get the right press release out. It's no longer about press release," he said. "Organic growth and making money and rewarding your shareholders, Jim."

Shares of Aphria fell more than 4% during the market-wide sell-off Monday, but the stock is up more than 23% year-to-date. 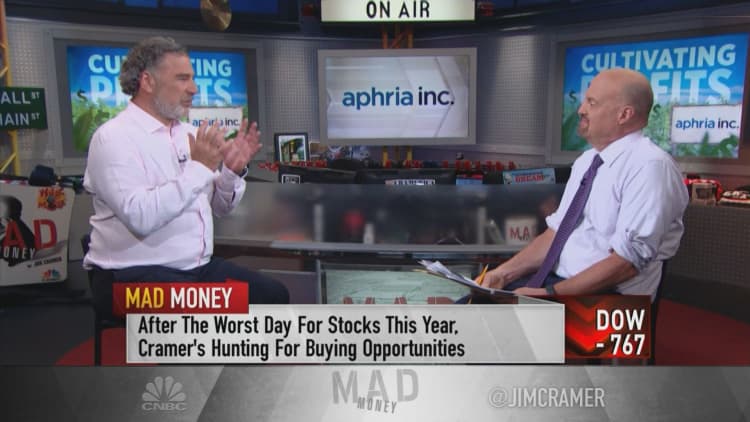