More than 3,500 people gathered in early October at a hangar at Amsterdam Schiphol Airport to celebrate the 100th birthday of KLM Royal Dutch Airlines.

It was a notable achievement. Well-known airlines such as Pan Am, TWA, US Airways and Virgin America are long gone. And in just the past two years, more than two dozen other airlines went from soaring to shuttered.

The Dutch flag carrier is not only one of the world's oldest airlines, it is the oldest airline still flying under its original name.

As in years past, the guest of honor at its annual birthday bash is the newest version in the collection of three-inch tall porcelain houses gifted to business class passengers flying on the carrier's intercontinental routes. Anticipating a truly special addition, some of those attending the party on Oct. 7 had flown in just for the occasion.

The history of the houses

Back in 1952, KLM began giving its first-class passengers a gift of a miniature Delft Blue pottery house portraying a historically or architecturally significant Dutch building. Because there were rules and limits regarding the value of gifts to passengers, the airline filled the houses with gin so that they were technically not gifts but free cocktails that just happened to be served in souvenir containers.

New editions of the souvenir houses were created on and off for many years, until 1994 – KLM's 75th anniversary – when the airline commissioned a bonus catch-up batch of miniature houses so that the number of souvenir houses in the series lined up with airline's age.

KLM gifs the Delftware miniature houses to its business class passengers. Each house is filled with Dutch gin.
Source: KLM

The houses are now one of the airline industry's most sought-after complimentary inflight amenities. A new miniature house, filled with Bols Genever, a popular Dutch gin, is unveiled each year at the carrier's birthday party, and then cycled into the assortment of miniature houses business class passengers can choose from on each flight.

A handy app helps passengers and collectors track the KLM houses they have, or still need. Swapping is popular and there's a robust secondhand market in Amsterdam shops and online, with prices ranging from about $15 for the common houses to upwards of $550 for some of the rarer editions.

Rotterdam's Hotel New York, in the former headquarters of the Holland America line, was the featured house in 2016. And the home in Haarlem where Dutch aviation pioneer and aircraft manufacturer Anthony Fokker once lived was honored with a miniature gin-filled house in 2017.

The 100th house in KLM's collection is a replica of the Huis ten Bosch palace in The Hague, the current home of Netherlands King Willem-Alexander and his family.
Source: KLM

The 100th house is a replica of the Huis ten Bosch palace in The Hague, the current home of Netherlands King Willem-Alexander and his family. The palace was built in the mid-17th century for Prince Frederik Hendrik of Orange and his wife Amalia van Solms. It was chosen to honor the strong ties between the Dutch royal family and KLM since the airline's early days.

The future of the KLM houses

While KLM's Delft Blue miniatures are highly collectible and closely tied to the carrier's branding, KLM recently has been talking about its commitment to making aviation more sustainable.

The carrier uses electric baggage towing tractors, purchases carbon offsets, operates many flights using a biofuel mix and works to reduce waste and weight on flights. But ditching the miniature porcelain houses to lighten loads has not been considered.

"There are things you should do and things which you shouldn't do. Period," KLM's President and CEO Pieter Elbers told CNBC.

"For sustainability, we are investing in lightweight containers, trolleys, cargo nets, bottles, glasses and many other things to reduce weight on our planes," said Elbers, "but those houses, we won't touch." 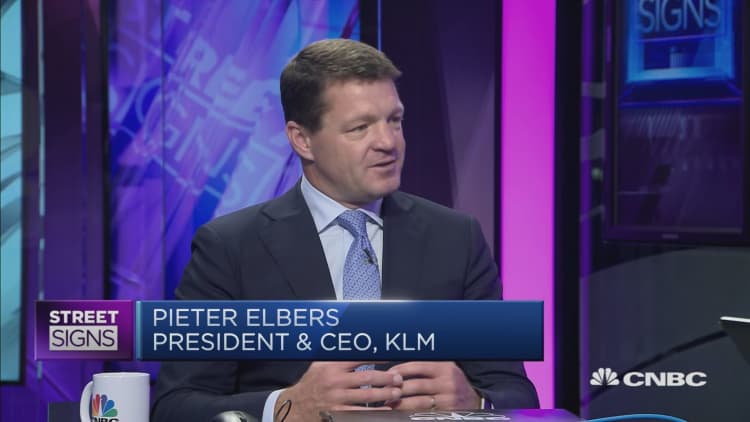 watch now
VIDEO3:1003:10
KLM chief: We have to take sustainability to the next level
Street Signs Asia