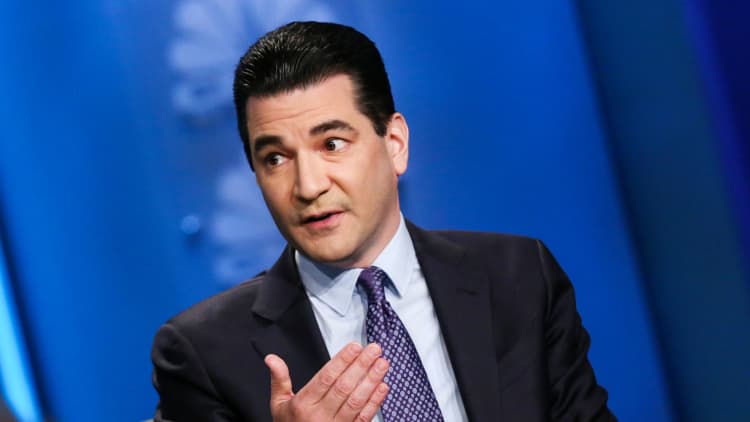 Former FDA Commissioner Scott Gottlieb said Monday that Juul Labs' products should be removed from the market, citing two studies that showed the scope of teen use of its e-cigarettes and flavored pods.

"It's very clear that Juul can't keep their products out of the hands of kids," said Gottlieb, a physician, health advocate and Pfizer board member. He left the Food and Drug Administration in April. "What's driving the youth use is primarily Juul."

"You've hooked a lot of kids," he added. "Kids now, it's become sort of fashionable and they like the form and fashion of this product. It could be that this product can't exist on the market anymore."

The studies published last week in the Journal of the American Medical Association found that Juul dominates the e-cigarette market among teens, with its mint pods being the most popular flavor. The studies also highlighted that 27.5% of high school students and 10.5% of eighth graders said they currently use e-cigarettes. More than half of both groups said they used Juul as their e-cigarette of choice.

Following the release of those vaping studies, Juul halted sales of its mint flavor, saying "these results are unacceptable and that is why we must reset the vapor category in the U.S. and earn the trust of society by working cooperatively with regulators, Attorneys General, public health officials, and other stakeholders to combat underage use." New CEO K.C. Crosthwaite said that Juul would support any "upcoming FDA flavor policy" and a regulatory process to get its nicotine pods cleared for sale in the U.S.

Gottlieb, who has criticized Juul in the past, said on "Squawk Box" on Monday that Juul does seem to "have cleaned up what they're doing" in terms of marketing to young people, "but it's hard to unring that bell."

Referring to teen vaping as an "epidemic," Gottlieb has called for a "federal reckoning" to address the problem.

President Donald Trump and top health officials said in September the administration was readying a ban on flavored e-cigarettes. However, comments from the president Friday suggested officials may be backing off those plans, under pressure from vaping advocates who argue that flavors help adults stop smoking cigarettes and that removing flavors would force vape shops around the country to close.

A spokesman for Juul was not immediately available to respond to CNBC's request for comment.

Since launching in 2015, Juul has quickly come to dominate the e-cigarette industry with roughly 40% of the market, becoming such a significant player that Altria, the top U.S. cigarette company, invested $12.8 billion for a 35% stake in the San Francisco-based startup late last year.

However, as Juul's problems mounted with regulators on teen use, Altria said last month that it wrote down a large chunk of its Juul investment, recording a $4.5 billion pretax charge against its third-quarter earnings.

Adding another layer of uncertainty for Juul and other e-cigarette companies is the mysterious lung disease linked to vaping. On Friday, U.S. health officials finally have a potential breakthrough in the investigation into the outbreak, which has killed at least 39 people. The officials are narrowing in on vitamin E acetate as a "potential toxin of concern."