Thanks to a mix of conventional and unconventional moves made possible by the Trump era, Nikki Haley has made herself an early front-runner for the 2024 GOP presidential nomination.

Haley's most risky and unconventional move materialized this week as her new book "With all Due Respect" included her account of how then-Secretary of State Rex Tillerson and then-White House chief of staff John Kelly tried to recruit her in a secretive effort to undermine President Donald Trump's agenda.

In a subsequent interview about the book, Haley made the argument that resisting the president publicly and to his face is fine, but doing so behind his back is not. (Tillerson has since denied Haley's account of the story.)

Regardless of who is telling the truth, Haley's position perfectly straddles a difficult set of prerequisites that are emerging for any ambitious Republican today. It's also much more newsworthy right now as more Trump supporters are responding to the impeachment process by clearly embracing the growing narrative that career bureaucrats inside the White House have been trying to catch the president in some form of misconduct from day one. 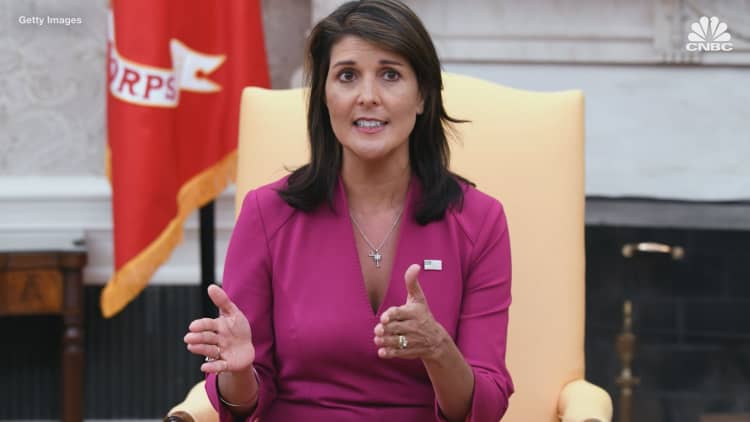 This is the perfect way and perfect time for Haley to clearly set herself apart from the small group of "Never Trumpers" that remain in the GOP. While that group seems to be overrepresented among the career political class types in Washington, D.C., support for the president remains at or above the 85% level among all Republican primary voters with little evidence that any anti-Trump candidate now or in the future will get any traction within the GOP ranks.

Second, do we really need polls to tell us President Trump remains enormously popular among the Republican rank and file? The president is still filling large arenas at his rallies. He was greeted with overwhelming cheers in the deep red state of Alabama at the Alabama-LSU football game on Saturday.

And even some of the pundits who had been mostly critical of Trump until fairly recently, like former White House press secretary Ari Fleischer and NBC contributor Hugh Hewitt have begun an almost daily defense of the president in their Twitter feeds. Anti-Trump Republicans may believe they have principles of their side, but the one thing they don't seem to have on their side is many other Republicans.

Haley's defense of Trump on one hand and public exasperation over some of his behavior on the other hand seems to fit nicely with the attitude of millions of voters who continue to back the president's policies but are still a little queasy about his personal conduct.

But President Trump is of course still very controversial nationwide, which makes Haley's more tempered approach to him the smarter move. In addition to not slavishly declaring her devotion to the president in the book or during her interview tour, Haley has clearly not supported Trump on every issue or even excused his behavior 100% of the time. Perhaps that was most evident in August when she publicly tweeted her disapproval of President Trump's decision to mock Rep. Elijah Cummings after his Baltimore home was burglarized.

Haley's defense of Trump on one hand and public exasperation over some of his behavior on the other hand seems to fit nicely with the attitude of millions of voters who continue to back the president's policies but are still a little queasy about his personal conduct. Other likely Republican presidential candidates in the future, including people like Texas Sen. Ted Cruz, will have a hard time replicating the narrow path Haley has cut out for herself in just the last three months.

But Haley is also checking off a number of other key boxes that any aspiring GOP presidential candidate needs to address. She has the mandatory book out to keep her in the news while she's officially out of office. She's also making the national lecture circuit to maintain and create new relationships with voters and donors.

Of course, the groundwork for her current very early front-runner status goes back a few years. The best example is Haley's most recent position as U.S. Ambassador to the United Nations. That job has traditionally not been much of a presidential stepping stone. But she mostly distinguished herself during her time in that job as a fierce defender of Israel on multiple occasions in an international body known for its particular obsession with and hostility to the Jewish state.

Haley's pro-Israel track record, both before and during her U.N. tenure will likely endear her to the key Evangelical demographic in the Iowa GOP caucuses and the many southern states in the Super Tuesday primaries.

Haley still significant hurdles to clear, like proving a woman can win a Republican presidential nomination when no female Democrat could even manage that feat until 2016. The bigger hurdle is time, in that the next four years could change the playing field many times over.

But for now, Haley has carved out a very strong position. She stands out in party that still doesn't seem to have truly adapted ever since then-candidate Trump so clearly defeated the crowded field of establishment Republicans who took him on for the nomination four years ago. Whether she officially ever runs for president or not, Haley has proven she's immune to a great deal of the tone deafness that often plagues career politicians from both parties.

Jake Novak is a political and economic analyst at Jake Novak News and former CNBC TV producer. You can follow him on Twitter @jakejakeny.