The casino company announced it's taking a 36% stake in the digital sports media company for about $163 million in cash and convertible preferred stock.

Penn will soon launch a Barstool Sportsbook brand in retail facilities and on its interactive mobile and online products, according to a news release announcing the deal. Barstool will promote Penn's physical casinos and interactive offerings for up to 40 years.

The stake is a big play for the regional gaming company to expand its exposure in sports betting, which will reduce its marketing costs and the price of customer acquisition. Penn is hoping it lures younger gamblers into its retail and online offerings as well.

On a call with investors, Penn National President and CEO Jay Snowden described the company's current gamblers as being in their mid-50s, while Barstool Sports' audience is largely in their 20s, 30s and 40s.

"With its leading digital content, well-known brand and deep roots in sports betting, Barstool Sports is the ideal partner for Penn National and will enable us to attract a new, younger demographic, which will nicely complement our existing customer database," Snowden said in the release. 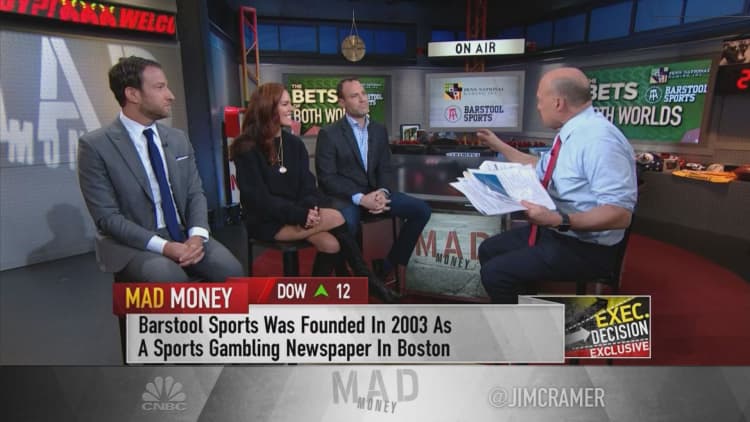 Fans of Barstool, which says it has 66 million unique monthly visitors, are affectionately known as "Stoolies," according to CEO Erika Nardini. In a call with investors, Nardini said roughly half is already engaging in sports betting.

Nardini said the company fielded inquiries and interest from every major casino and sports media company but chose Penn as its partner for what it brings to the table.

Penn has 41 facilities in 19 states and is well-positioned in states that are currently considering sports betting legislation but haven't adopted it.

Penn said it, too, had considered partnerships with other major players in the sports and sports betting industry — some of whom it already shares a partnership. But it said Barstool comes out on top for its customer loyalty and engagement, its diverse revenue streams and its innovative approach.

Snowden described Barstool as "scrappy" and said it's the way he also sees Penn.

In 2018, Barstool Sports was valued at $100 million based on an investment by former majority owner Chernin Group, according to Jefferies Gaming analyst David Katz.

"The $450 million valuation implied by this agreement builds in future growth enabled by Penn. This deal will clearly raise Penn's profile in sports betting with the returns on investment demonstrated over time.

Penn said it intends to increase its ownership to roughly 50% in three years, but Snowden said on an investor call the time delay is necessary to make sure that Barstool maintains editorial leadership for the media company as it moves forward with the partnership.

"Penn National will be Barstool Sports' exclusive gaming partner for up to 40 years and have the sole right to utilize the Barstool Sports brand for all the Company's online and retail sports betting and iCasino products," according to the agreement.