Teargas and smoke bombs clouded a Greek-Turkish land border on Saturday in a fresh flare-up in tensions over migrants seeking access to European Union territory.

A Reuters correspondent in the area said the projectiles were coming from Turkish territory and being fired towards Greek police near the crossing at Kastanies. Some tear gas was also being fired by Greek police.

Meanwhile hundreds of people could be seen on the Turkish side of the high perimeter fence, with some pushing at it.

Thousands of migrants have been trying to get into Greece, an EU member state, since Turkey said on Feb. 28 it would no longer try to keep them on its territory as agreed in 2016 with the EU in return for billions of euros in aid.

Turkey argued it could no longer contain the hundreds of thousands of migrants it hosts, or the likelihood of more refugees on the way from intensified fighting in northwestern Syria, but Greece has sought to keep out the fresh influx.

Greek soldiers and riot police have been manning the borderland, as thousands of migrants have made a rush for the frontier in recent days. Their Turkish counterparts have been stationed on the other side.

Greek officials say authorities have thwarted thousands of attempts by migrants to cross in the past eight days. Over a 24-hour period by Saturday morning, there were more than 1,200 attempts to cross and 27 arrests, a government source said. Most of the migrants were from Afghanistan and Pakistan. 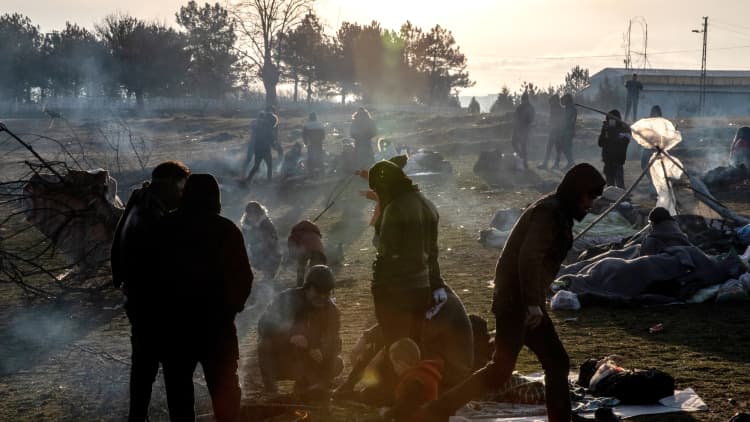 "Greece is doing what every sovereign state has the right to do, to protect its border from any illegal crossings," Greek Prime Minister Kyriakos Mitsotakis told the CNN network on Friday night.

"I'm afraid this is a constant and very systematic provocation on Turkey's behalf which has nothing to do with the plight of these people. They are being used by Turkey."

Heavy machinery was moved to the border crossing area on the Greek side on Saturday morning and a bulldozer was seen digging embankments close to Kastanies.

Turkey on Friday accused the European Union of using migrants as political tools and allowing international law to be "trampled", after EU foreign ministers said they would work to stop illegal migration into the bloc.

The EU on Friday pleaded with migrants on the Turkish border to stop trying to cross into Greece but dangled the prospect of more aid for Ankara as the standoff entered a second week.