Sales of new vehicles to U.S. consumers declined less than expected at the beginning April despite the coronavirus outbreak and state orders keeping most dealer showrooms closed across the country, according to J.D. Power.

After U.S. auto plants closed and most states enacted "stay-at-home" or "shelter-in-place" orders last month, J.D. Power expected sales to decline by as much as 80% this month compared to its pre-pandemic forecast. While still significantly down, sales through the first 12 days of April were only off by about 55% — indicating that sales for the full month might not be as bad as feared, the firm said Wednesday.

"This is obviously much better than the previous worst-case scenario that we had. This reflects the demand is showing some resilience," said Thomas King, president of the data and analytics division and chief product officer at J.D. Power.

If that trend continues, it would mean sales of about 597,000 units in April compared to J.D. Power's pre-pandemic forecast of nearly 1.1 million vehicles for the month. 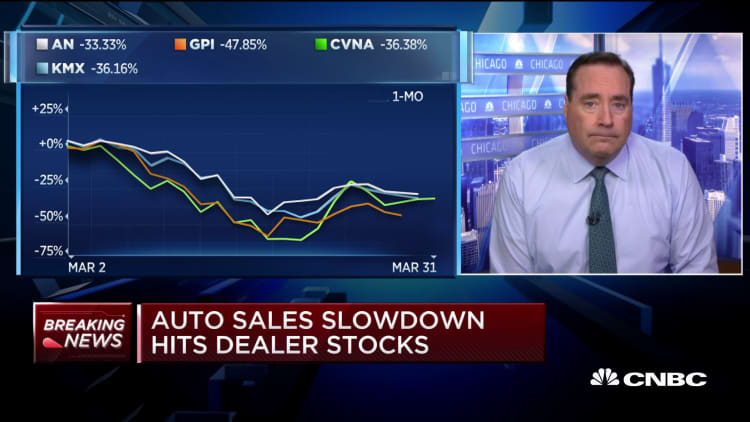 Any relaxation of "stay-at-home" or "shelter-in-place" orders that have closed many dealer showrooms would provide a further uptick in sales, according to King.

Long-term financing terms and 0% interest offers continue to assist sales during the pandemic, according to J.D. Power.

The narrower declines won't directly impact automakers' balance sheets, but they will assist in clearing the inventories of franchised dealers and allow them to order more vehicles from automakers once U.S. production resumes. Most U.S. plants have been down for several weeks. Some are expected to resume production by early-May.