Ambassadors to Uruguay, France, Morocco and Italy sold shares in transactions that could have made them millions of dollars, according to financial disclosure filings reviewed by CNBC. Much of their sales were in January and continued throughout February, the records show. Their transactions line up with a timeline of federal and congressional announcements as the virus started sweeping across the globe earlier this year.

Some of the ambassadors' stock transactions were for companies involved with research or developing products that are linked to treating patients that have contracted the coronavirus, such as biopharmaceutical firms.

Trump started publicly downplaying the severity of the pandemic earlier this year, including in late January during the World Economic Forum in Davos, Switzerland. At that event, he told CNBC that the administration had it "under control. It's going to be just fine."

Italy and France have coronavirus death tolls that are close to or above 30,000. Morocco and Uruguay have combined for over 200 deaths. More than 10.7 million people have been infected worldwide, according to a Johns Hopkins University tally.

As the White House scrambled to respond to the spread of the virus, Ambassadors Lewis Eisenberg, Jamie McCourt, David Fischer and Kenneth George were seeing large gains from stock transactions, their filings show. 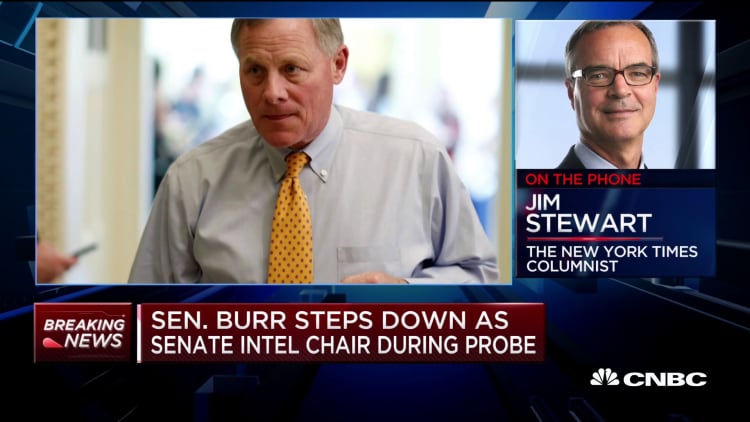 watch now
VIDEO6:1306:13
NYT's Jim Stewart in favor of limiting investments by members of Congress
Squawk on the Street

A State Department spokesman said that ambassadors were briefed in late February at the Global Chiefs of Mission Conference on the possible impacts the coronavirus could have on their operations but never were part of any other briefings this year. The spokesman also said the stock sales and purchases were often based on guidance from financial advisors.

"U.S. ambassadors were briefed on potential impacts of the Covid pandemic on State Department operations at the Global Chiefs of Mission Conference February 25-26, 2020," the spokesman said on Thursday. "Otherwise, Ambassadors received no briefing on Covid from any U.S. government officials. These financial decisions were among a wide range of purchases and sales to adjust portfolios, often based on advice of financial advisors."

Democrats are already pouncing on the actions by the Trump diplomats, including Democratic super PAC American Bridge, which initially flagged some of the stock sales and purchases to CNBC.

"Any official who dumped millions in stocks while the administration downplayed the threat has no business in a position of public trust and their actions warrant thorough investigation in order to prevent further abuses of power," Max Steele, a spokesman for the group, said in a statement.

Their sales came as many investors were getting pummeled in the stock market. The Dow Jones Industrial Average started to tank in late February and bottomed out the next month, hitting the lowest point it's been at since Trump was sworn into office.

Many of these ambassadors have been longtime GOP donors, including those who gave to Trump's 2016 campaign for president and his inaugural committee. The discovery of their trades comes after Sens. Richard Burr and Kelly Loeffler were under scrutiny for selling their securities at the start of the pandemic. Burr is under investigation for those sales by the FBI.

Another member of the Trump administration, former chief of staff Mick Mulvaney, also dumped portions of his stock portfolio while the president tried to distance himself from the pandemic, The Daily Beast recently reported.

Fischer, who gave $275,000 to Trump's inaugural committee and is currently the U.S. ambassador to Morocco, sold from close to $380,000 to up to just over $2 million in stocks between January and February, according to his financial disclosure report. The Office of Government Ethics asks government officials to give a range in value of how much federal employees are making from either buying or selling assets.

That day, Fischer's filing shows that he sold between $2,000 and $30,000 worth of stock in at least two companies that are involved with developing coronavirus treatments, such as Biohaven Pharmaceuticals. The pharmaceutical company announced on its website in April that it plans to "study intranasal vazegepant, a third generation, high affinity, selective and structurally unique, small molecule CGRP receptor antagonist, in pulmonary complications of COVID-19 disease."

Fischer also sold stock in BioTelemetry, a heart monitoring company, which, according to its website is promoting a coronavirus monitoring program. Both these companies' stocks fell drastically over the course of a month from when Fischer sold his shares. For Biohaven, the stock was priced at just over $53 on Feb. 5 and a month later, would drop at least 8%. BioTelemetry was priced at close to $53 on that same day and then its share price dropped 20% just over a month later.

In January, Fischer purchased and sold stock in Apple, Amazon and Alphabet. In March, he sold between $15,000 and $50,000 in shares of Uber.

George, the U.S. ambassador to Uruguay, went on a stock buying and selling spree in January and February. Of the notable transactions, George invested between $5,000 and $75,000 in RedHill Biopharma. In May, the company announced that it was approved by the Food and Drug Administration for a Covid-19 clinical study.

McCourt, the U.S. ambassador to France, sold her shares on Jan. 17 in what's described on her financial disclosure as the "A.J. Capital Graduate Hotel Fund III." She made anywhere between $1 million and $5 million on that divestiture alone, and up to an additional $10 million on other stock sales that same day. The Centers for Disease Control and Prevention and other U.S. government agencies, at the time, announced that they were enacting health screenings for those traveling from Wuhan, China, where the outbreak is believed to have begun.

Through partnerships with universities, the firm started opening up hotels around universities across the country. However, the pandemic forced many of the "Graduate Hotels" to temporarily shut down, and according to its website, has just started reopening. Six of the 28 hotels listed reopened in June, while 11 others on the website are scheduled to start opening in July.

The hotel industry in the first quarter of 2020 was pummeled in the wake of the pandemic. Data from FactSet shows that many of the top hotel operators ranging from Marriott to Hilton saw their first-quarter financial performance drop by up to 64%.

During the 2016 election, McCourt gave nearly $450,000 to the Trump Victory committee, a joint fundraising committee between Trump's campaign and the Republican National Committee. Since her confirmation in 2017, she has given a six-figure check to the same fundraising operation.

Eisenberg, the U.S. ambassador to Italy, almost a week before the U.S. State Department issued a travel warning to people who were considering a trip to that country as it saw a wave of Covid-19 cases, made between $200,000 and $500,000 in stock sales.

Eisenberg's filing describes the source of the funds, in part, as follows: "AMLP - ALPS ETF TR ALERIAN MLP UNSOLICITED." It appears to be an exchange-traded fund, which often hold groups of stocks, commodities or bonds and automatically makes trades according to schedules. He gave $35,000 to the RNC in 2015 before Trump was officially the Republican nominee.

It's unclear what stocks are within that fund.