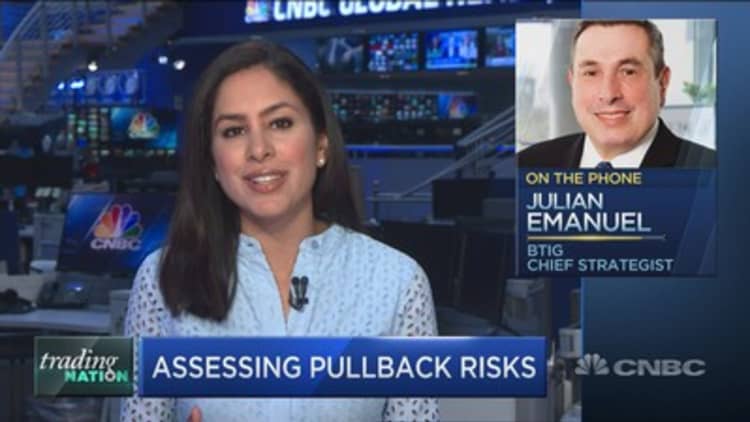 The market's biggest winners may be in a bubble.

"Where the risk is disproportionate is in technology," the firm's chief equity and derivatives strategist told CNBC's "Trading Nation" on Monday. "That's where our concerns start to bubble up."

According to Emanuel, Facebook, Apple, Amazon, Microsoft and Google are the most vulnerable.

"There's a misalignment or a bubble, if you will, in the relative performance between top and bottom sectors," "The technology sector has outperformed energy by 78.2% [in the last year.] It's really an astounding number."

He's concerned a pocket of bubbles in tech cold spark a 10% decline in the tech-heavy Nasdaq, which has hit all-time highs 35 times so far this year. It closed lower on Monday, but the Nasdaq is still just 1% from its record high.

"This is the kind of time where if you've got outside gains in some of these high-flying tech names, you probably want to rotate towards some of the laggards," Emanuel said. "It's sort of a mini portfolio rebalancing the same way we advised clients to pair back their fixed income exposure and buy stocks in late March."

Emanuel, who came into 2020 as one of Wall Street's biggest bulls, isn't sure what could prick the "bubble." He suggests it could be anything from escalating U.S. tensions with China to the presidential election to nothing at all just like the 2000 tech bubble collapse.

But when it does happen, he warns the S&P 500 won't be unscathed. Emanuel cites the sheer magnitude of exposure the index has to big tech.

"It's really a sign of the likelihood that further new highs in the S&P will be difficult to accomplish," he said. "You could see a pullback certainly given the risk factors that we have in the market presently looking forward towards the election season."

However, his overall bubble concerns don't apply to the S&P 500.

"We don't have a problem with where the market is valued overall — certainly not when you're thinking about zero interest rates for the higher multiples that we saw back in the days of dot-com," he said.

Despite his cautiousness, Emanuel has a bullish outlook for stocks in 2021. He expects the economy battle back from the coronavirus pandemic and the uncertainty surrounding the presidential election to disappear.

"You don't necessarily want to reduce your exposure to stocks, in general," Emanuel said. 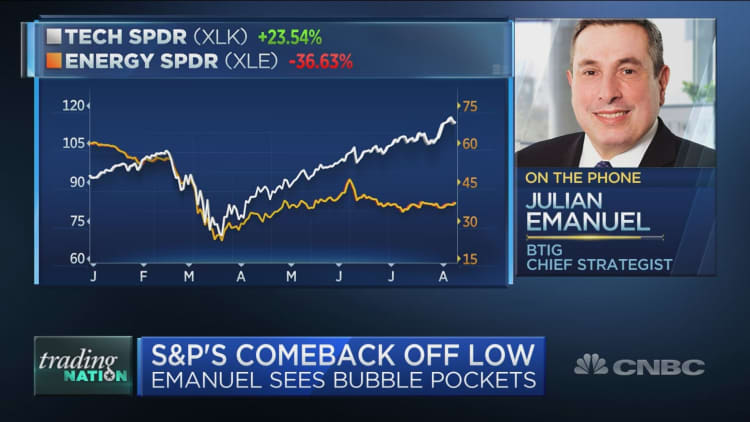