Amazon is opening the first location of its new chain of grocery stores, which are designed to court a different set of customers than Whole Foods shoppers.

The first Amazon Fresh grocery store, located in Los Angeles' Woodland Hills neighborhood, will open its doors this week to customers invited from the local area, the company announced Thursday. The store will open to the broader public in the coming weeks. Amazon has three other Fresh store locations, including in Irvine and Northridge, California, as well as the Chicago suburb Naperville, all of which are being used for online order fulfillment. The company declined to say when they'll open to the public.

Amazon is aiming to crack open a new segment of the U.S. grocery industry with the launch of its Fresh store, bringing the e-commerce giant into more direct competition with chains like Kroger and Albertsons. The new format incorporates a blend of in-store and online shopping, while offering consumers a variety of products at lower price points than Whole Foods. Whole Foods, acquired by Amazon for $13.7 billion in 2017, is known for its focus on organic goods and doesn't sell products with artificial ingredients.

The 35,000-square-foot store, which is roughly the size of a Whole Foods, will be stocked with supermarket staples like Nabisco cookies, Coca-Cola drinks and Kellogg's cereal, as well as products from Whole Foods' cheaper private-label brand, 365. Store aisles will also feature Amazon's own brands, including Happy Belly snacks, Cursive wine and a new line of Fresh-branded food products.

"We do think of these formats as complementing one another and serving different needs," said Jeff Helbling, vice president of Amazon Fresh stores. "Whole Foods is a longstanding pioneer and leader in natural, organic and clean foods. Amazon's Fresh selection is fairly different. We see them operating next to one another and we're excited to offer customers the choice between the two."

Amazon has also incorporated some unique high-tech touches to the Fresh store. The Woodland Hills location will be the testing ground for Amazon's recently launched Dash Carts, which allow shoppers to check out without waiting in line. However, the store doesn't feature the vast network of cameras and sensors powering Amazon's Just Walk Out technology, which is used in its cashierless Go convenience and Go Grocery stores.

There are also kiosks located throughout the Fresh store equipped with voice-activated Echo Show smart displays, where shoppers can ask Amazon's Alexa voice assistant for help locating items in the store or for suggestions on what to make for dinner.

The stores are designed to balance the needs of consumers who order online and those who still prefer to shop in person. There's a dedicated section where customers can pick up amazon.com or grocery orders placed online, or return their packages for free.

The Fresh store has a dedicated section where customers can pick up amazon.com or grocery orders placed online, or return their packages for free.
Amazon

While Amazon has incorporated the experience of shopping online in the store, there are still signs of the traditional grocery experience, like a prepared food section where shoppers can order fresh pizza or sandwiches, as well as a seafood counter.

Amazon is expanding its footprint of physical stores at a time when the coronavirus pandemic has accelerated the collapse of already struggling brick-and-mortar retailers. Many retailers have been hobbled in recent months by declining foot traffic, reduced consumer spending and a shift to online shopping, putting some at risk of permanent store closures.

The pandemic even altered Amazon's own plans for its Fresh grocery stores. Until this week, all of Amazon's Fresh stores were used as "dark stores," or locations that are closed to the public in order to fulfill their needs for online deliveries. Last quarter, Amazon said online grocery sales tripled year-over-year in the second quarter and it increased grocery delivery capacity by more than 160%.

"It wasn't our initial plan, but we thought it was the best thing to do to serve the high customer demand we were seeing online only at that particular point in time," Helbling said.

Amazon has also adjusted its operations in the store in light of the pandemic. It will require customers and employees to wear masks while in the store and it will limit the store to 50% capacity, among other safety protocols.

Correction: This article has been updated to reflect that Naperville is a suburb of Chicago. 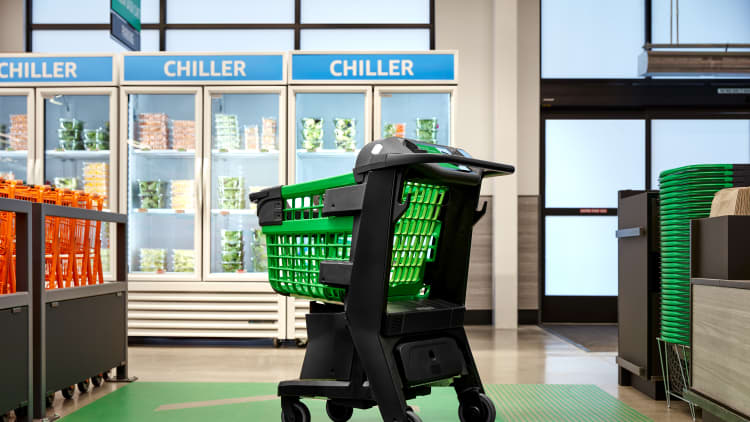