For years, technology investors and aficionados have been anticipating Apple's 5G wireless-enabled iPhones.

Now that Apple is on the verge of releasing them, AT&T Communications CEO Jeff McElfresh says people may want to check their excitement.

Apple plans to launch its 5G iPhones in October, according to people familiar with the matter. Some users will want to upgrade to 5G wireless service, which will have "home broadband-like speeds," immediately, according to McElfresh. But others won't want to pay additional fees for the service and may be content with AT&T's current 4G LTE technology, he said.

"I do believe that you will see many of the iPhone subscribers move to upgrade to the device, but I wouldn't forecast that it's going to be a massive event," McElfresh said. "I also don't think it's going to be a non-event. I think customers, based on the pressures of the economy that we're all facing today, will make a calculated decision as to what they want to do."

While 5G technology has been touted as the future of Internet connectivity, paving the way for autonomous vehicles and smart appliances, initial reception could be muted because many of the groundbreaking applications of faster speeds either don't broadly exist yet or are beneficial to large businesses rather than consumers. AT&T officially launched its 5G network in locations across the country in July.

In the meantime, AT&T engineers are already working on 6G, which will likely build off progress made during the decade on connected machines and artificial intelligence, McElfresh said. For consumers intent on getting the fastest speeds, wireless technology will always trail fiber-to-the-home as an option, he said. AT&T is planning to boost its spending on fiber rollouts in the coming years, McElfresh said.

"If you are in a home or an environment where you've got multiple sessions alive in the home, and they're taxing in terms of bandwidth, you get down to physics," McElfresh said. "I mean, all cell sites, no matter if they're 5G or 4G, whether they're tall or small, all require a lot of fiber because you've got to connect that spectrum and those radios back to the network. And so our investment thesis around fiber and 5G go hand-in-hand."

Subscribe to CNBC Pro to read the full Q&A and other insights from industry leaders.

Watch: AT&T CEO on the decision not to cut off customers who can't pay during the pandemic. 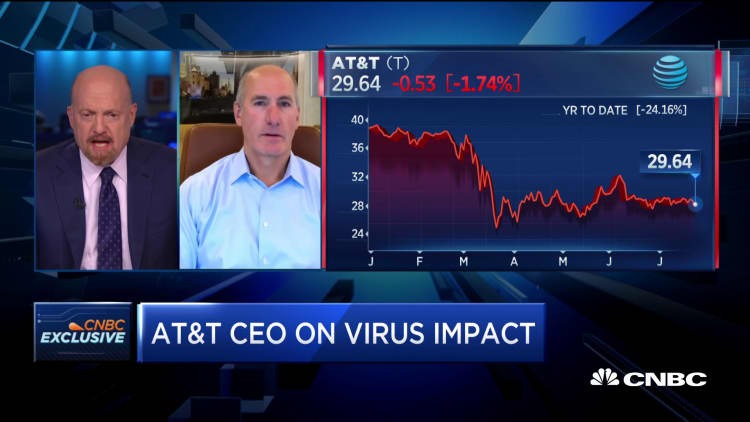 watch now
VIDEO1:4201:42
AT&T CEO on the decision not to cut off customers who can't pay during the pandemic
Squawk on the Street