A late Amazon Prime Day means an early start to the holiday shopping season this week.

The annual shopping event has become a holiday in its own right, with July 15 — one of last year's Prime Days — trailing behind only Cyber Monday and Black Friday for online shopping last year, according to retail research firm NPD Group. It will span two days this year, starting at 3 a.m. ET Tuesday and lasting through Wednesday.

Retailers are gearing up for an early start to holiday shopping by picking products to promote, using tech tools to manage their supply chain and getting employees ready. By dangling good deals, they hope to excite early holiday shoppers and stretch out an all-important season for their bottom line.

Analysts predict the e-commerce event will be the biggest in Amazon's history, as more Americans stretch out their search for holiday gifts and do more of it online than in previous years because of the pandemic. Amazon's revenue from Prime Day is expected to jump to about $7.5 billion, according to analysts from JPMorgan, up 42% from its estimated $5.3 billion in revenue last year. That represented Amazon's largest global shopping event.

Robby Ohmes, a discount retail analyst for Bank of America Securities, said retailers big and small want to "participate in that energy." Target will have "Deal Days," and Best Buy will kick off Black Friday sales on those same days. Walmart will have its "Big Save Event" from 7 p.m. ET Sunday through Thursday.

"[Amazon] Prime Day helps everybody who sells online," he said. "It brings everybody to the table, and everyone does something special to try to participate in it."

This year, retailers have had to predict what consumers may buy as gifts and for themselves during an economic and public health crisis.

Ashwani Monga, a Rutgers University-Newark marketing professor who studies consumer psychology, said the typical rule of thumb with gift-giving — buying items that people wouldn't buy for themselves — may be flipped on its head.

He said he expects shoppers to gravitate more than usual to practical gifts: Think winter coats, snowshoes and hiking equipment that allow friends and family to gather outdoors during chillier months. They're also looking for kitchen supplies that elevate cooking as family and friends steer clear of restaurants. A fire pit may be on their gift list this year, turning a backyard into a cozy destination where neighbors can gather but stay socially distanced.

On the other hand, he said, retailers may use promotions to push items that customers have largely ignored during the pandemic — such as dresses and watches — that appeal to their hope for a return to normal life.

And some of Best Buy's discounted items, such as laptops that start at $119.99, could double as supplies for the home office or remote classroom.

Retailers' use of technology has gained greater importance this holiday season, said Jill Standish, who leads Accenture's retail practice. She said nearly every retailer will look to advanced analytics, machine learning and new sources of customer data to smooth out their operations as they enter the busy period.

They also have to figure out where to place their inventory, so it's available whether consumers buy a toy at the store, get it delivered to their doorstep or pick it up at the curb.

"If you're a retailer right now, we're flying into a bit of a fog," she said. "The one thing you need when flying into a fog is instrumentation."

Retailers can use those sophisticated tools to guide techniques, from grouping like items together in the warehouse to reducing split shipments, she said.

Dan McKone, managing director at consulting firm L.E.K., said retailers can count on deeply discounted products selling at a higher rate and stock accordingly. They can use technology to go a step further, identifying correlations between what else customers typically put in their virtual basket when they buy a certain sales item. They can run predictive scenarios to minimize out-of-stock goods. And they can look for clues in search data, which indicate where shoppers are clicking.

Retailers have been able to anticipate a gradual increase in e-commerce sales each holiday season, as more sales shift online. This year, he said, the pandemic makes that more of an educated guess.

Big-box retailers and Amazon have tried to keep up with a flurry of packing and shipping during the pandemic. They're gearing up for online shopping to intensify starting this week with Prime Day. That's meant thousands of hires and different expectations for employees.

Amazon geared up for an earlier and longer "peak season" by fully staffing its warehouses and requiring employees to work overtime. The company has hired 175,000 warehouse and delivery workers during the pandemic, keeping more than 70% of them. It's opened more than 150 last-mile delivery stations between March and October, which could help it speed packages to the doors of holiday shoppers.

Walmart is doing its first significant holiday hiring effort in five years, despite a spree throughout the pandemic. It's adding 20,000 seasonal employees who will work at its fulfillment centers. The company already hired more than 500,000 employees across its U.S. locations since March.

And Target expects to hire about 130,000 seasonal workers for the holidays, about the same number as last holiday season, along with giving its employees additional hours. More of them, however, will have a job description related to online shopping. Twice as many Target employees will be dedicated to same-day curbside and in-store pickup of online purchases compared with the first half of the year. More employees will work at distribution centers, making sure items are in stock at stores and ready to ship. And store employees will get cross-training so they can help run out an online purchase to a customer's car or pack up a box to send to their doorstep.

Target CEO Brian Cornell has said a major theme of the pandemic will spill over into the holidays: flexibility. He said the retailer and its workforce will stay nimble as the outlook remains unclear. 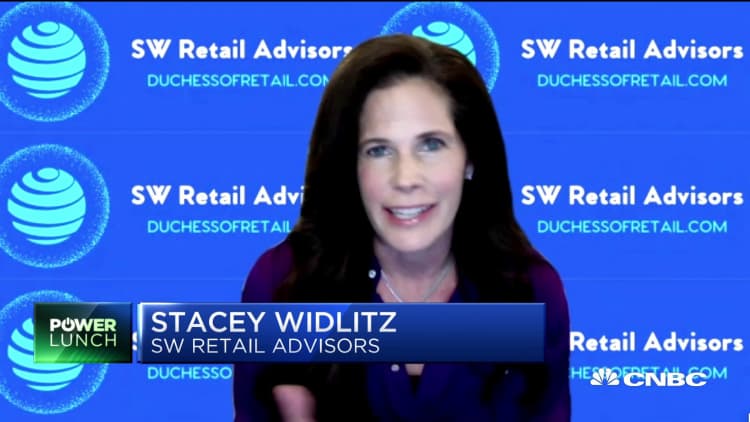 watch now
VIDEO3:1403:14
Why Black Friday may finally be an event of the past
Power Lunch