With only a week until the Nov. 3 election, Trump and former Vice President Joe Biden are traveling to states across the U.S. in a final push to woo voters. Their approaches have differed, however, with Trump choosing to host large, crowded rallies that go against the advice of his top coronavirus advisors, compared with Biden's drive-in events.

Trump, who was hospitalized with the coronavirus earlier this month and has since recovered, downplayed the outbreak in the White House as well as his own infection. His son Barron, who also tested positive, recovered in "about 12 minutes," Trump said.

"Young kids have a very strong immune system, nobody even knew it," Trump said. "Get your children back to school." While young adults are less likely to fall seriously ill and require hospitalization or die from Covid-19, they can still spread the virus to older adults who are at risk, experts warn.

Michigan was among 16 states reporting record-high daily new Covid-19 cases on Monday, according to a CNBC analysis of data compiled by Johns Hopkins University that uses a weekly average to smooth out fluctuations in daily reporting. The state is now reporting roughly 2,220 new cases daily, a 22% increase compared with a week ago.

"Covid-19 is not disappearing. Trump's rally in Lansing only threatens to make things worse," said Dr. Stephanie Markle, a critical care surgeon in Kalamazoo and member of the Committee to Protect Medicare, during a press call organized by the committee.

Amid climbing cases in Michigan, Markle said that her hospital has had to reopen Covid-19 units to prepare for additional patients. She said hospitals have their surge plans in place and "are bracing for the next wave that we know is already here."

"We are extremely concerned that the president's rallies will affect people in our communities. This will cause uncontrolled spread to worsen the pain and suffering we're already seeing across the state," she said.

Dr. Rob Davidson, an emergency room physician in west Michigan and the executive director of the Committee to Protect Medicare, criticized the president for spreading misinformation about the coronavirus and using his rallies to "hide the fact that he threw in the towel."

"Those of us who see for ourselves what Covid-19 looks like up close with patients who can't breathe know that Covid-19 is not going anywhere, anytime soon," Davidson said. He added that visitors and patients in his emergency department have grown frustrated when told they must wear a face covering.

"Every time he mocks people for wearing masks he signals to supporters that they shouldn't wear masks," Davidson said.

"Americans have the right to gather under the First Amendment to hear from the President of the United States," said Courtney Parella, a deputy national press secretary for Trump's campaign. 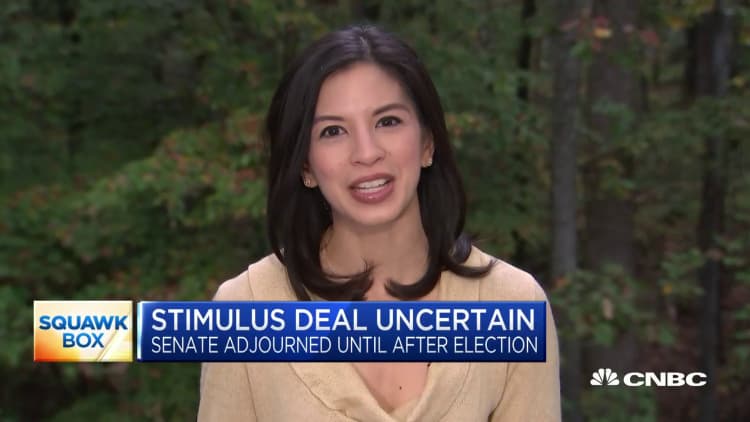 watch now
VIDEO1:3201:32
Lawmakers can still take action on the economy—Here are the key dates to watch
Squawk Box