Apple has a real competitor to the Amazon Echo, and it may provide Apple with yet another growth opportunity.

According to eMarketer, 70% of smart speaker owners in the U.S. have an Amazon Echo. Google is largely seen as the nearest competitor to Amazon, followed by companies that build either Amazon Alexa or Google Assistant in their speakers, like Sonos. So far, Apple has largely sat on the sidelines while its competitors ran off with the market.

The first HomePod launched in 2018 for $349, which was too expensive for most buyers who could get a similar product, albeit with lower sound quality, for much less. The $99 HomePod Mini is Apple's best shot to take market share away from Amazon. 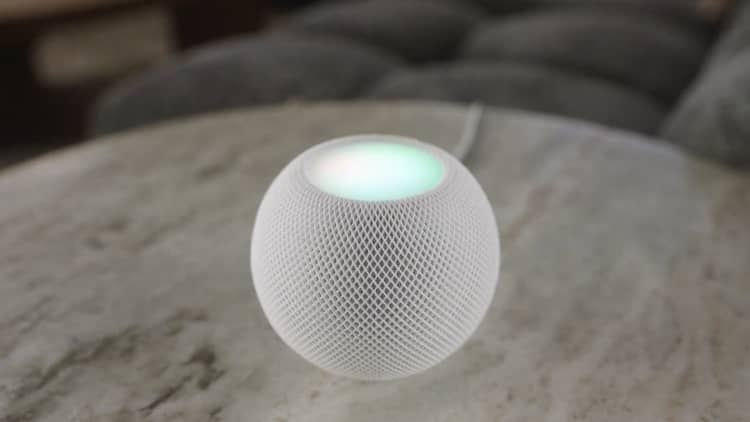 It's good, but you'll get the most out of it in households that are invested in Apple's ecosystem of software and hardware. Here's what you need to know.

I love how small the HomePod Mini is. It's slightly larger than a baseball -- far smaller than I expected -- and has a clean mesh design free of any ugly buttons. I tested the black model, which I liked, but it's also available in white.

I've placed two around my houses in places where I normally don't like larger speakers, like on coffee tables in the living room or on the side of my desk. I also like that the touch-screen top glows when it's in use and lets you easily adjust the volume with a couple of taps.

The sound quality is impressive for its size. Music sounded clear and, if I closed my eyes, often sounded like it was coming out of a larger speaker. It's also good at balancing songs so that you can hear all parts of them, although the bass isn't as pronounced given it doesn't have a dedicated woofer like some similarly priced speakers from Google and Amazon. It sounds on a par with Amazon's $50 Amazon Echo Dot but not as good -- especially in terms of bass -- as the larger $99 Amazon Echo or Google Nest Audio.

Music sounds best if you pair the speaker with another HomePod Mini, which puts them in stereo mode so you have true left and right balance. The same is true of other speakers from Amazon and Google, which also allow you to do this. It's also easy to place different HomePod Mini's around the house and play music in different rooms, or the same song in some or all rooms.

The HomePod Mini can act as an intercom and send a message to all of your Apple devices.
Apple

Apple packs in a bunch of other fun features. There's an intercom option that lets you broadcast a message to anyone in your family, so long as they have an iPhone, iPad, Apple Watch or their own HomePod Mini. It's useful if you want to tell the whole house dinner is ready, and I like that messages went to my other Apple devices even if I was home or not. You just get a little audio notification on your watch or phone that you can tap and play back, which is great since it won't automatically just play that message if you're in a meeting. The Amazon Echo and Google Nest speakers have similar features.

I also really like that I can start playing a song on my iPhone and tap the HomePod Mini and it'll start playing on the speaker. Or a song can start on the speaker and I can walk by and transfer it to the iPhone with another tap. Apple will release an update in the coming months that will improve the hand-off experience with vibration and colors so it feels more like a song is moving from one device to another.

I like some of the added smarts in the latest HomePod software update, which is also available for the regular HomePod. You can ask for a personal update by saying "Hey Siri, what's my update?" and it'll read off your calendar events, the weather, traffic to your appointments, reminders and then a news briefing. I like that, although Google and Amazon let you do the same thing but let you customize your news source and what the digital assistant reads you.

Another new feature called "Web Answers" that displays the results of questions you ask on your phone. So, if you ask something like "show me pictures of Rome" it will show pictures of Rome on your iPhone.

I also liked the tie-in with Apple Maps. When I asked the HomePod Mini how long it'll take to get to my in-laws' beach house, CarPlay will recommend directions to that place when I got in the car.

I have about a dozen lights and other smart gadgets around my house synced up with Apple Home, the app on iPhones, iPads and Macs that lets you control them with Siri or through an app. The HomePod Mini works well as a hub if you want to control gadgets when you're away from home, and I like that I can just speak to it to turn off my lights at night. But this works just as well on an iPhone or on the iPad/Apple TV, which also work as a Home hub.

The real strength of the HomePod Mini is that it taps into lots of Apple's apps on your iPhone, which means iPhone owners will get the most out of it. You can ask Siri to add to your Notes app, for example, set reminders and tasks that sync with your phone, make and receive calls, find your lost iPhone or Apple Watch, send and receive iMessages and get news briefing from the News app. Those apps aren't available for the Google Nest Audio or Alexa, though similar ones are. It's just convenient if you already use them.

While you can use other services like Spotify to AirPlay Music to the HomePod, so far only Pandora has added support that lets you set it as the default option instead of Apple Music. So, you can change that setting and just say "Hey Siri, play music by Led Zeppelin" and it'll play from Pandora instead of Apple Music. That's a bummer for folks who pay for Spotify or other services that haven't added this support yet, though. The Amazon Echo and Google Nest Audio offer support for lots of default music services. I wish I could set more apps as the default service on the HomePod Mini.

While the HomePod Mini is good for Apple users, and Siri has gotten a lot better in recent years, you can still do more with an Amazon Echo or Google Nest Hub. The Echo lets you buy stuff from Amazon, for example, or control your Amazon Fire TV. I'd like to see Apple add support for controlling the Apple TV from a HomePod Mini by voice, so that I could just ask it to start playing a movie or TV show. But you can't do that.

The Google Nest Hub, as you might expect, ties better into Google services like Calendar and Maps, and has a smarter voice assistant since it taps into Google Search and knows a lot more about you if you regularly use Google services.

But, if you're like me, you may use Siri or Google Assistant or Alexa to ask the weather or a sports score most of the time, and Siri can do that just fine.

At the $99 price point, I also think the Nest Audio and Amazon Echo sound better. As I mentioned earlier, they have larger speakers and dedicated bass, so that's expected. The HomePod Mini sounds better to me than the $50 Amazon Echo Dot, though, which is similarly sized. In any case, if you want better audio than any of those speakers, look at the regular HomePod (now $299) or Sonos speakers that work with Google Assistant and Amazon Alexa and support Apple Airplay but not Siri.

Should you buy it?

The HomePod Mini makes a lot of sense for houses where the whole family is invested in Apple's hardware and software. If you use Apple apps and own an iPhone then, yeah, you'll like what the HomePod offers. It sounds good for the price and I think you'll like it.

But if you have a diverse family of people who use lots of devices, or just prefer Amazon or Google services, then the HomePod doesn't make a ton of sense. You'd have competing ecosystems that don't work well together. That's sort of the problem with those whole smart home speaker category in general -- once you buy one product it makes the most sense to sort of just keep buying those so that you can expand on it. And it seems overly costly to switch from any of them to another.

If it's purely audio quality you're chasing, I recommend checking out Sonos speakers. I still think they offer the best sound for the price. If you want a better sounding speaker with the Apple tie-in, get the regular HomePod for $299. 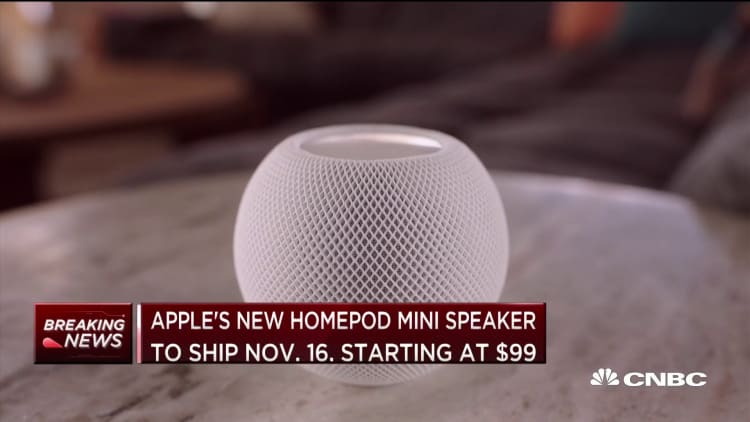