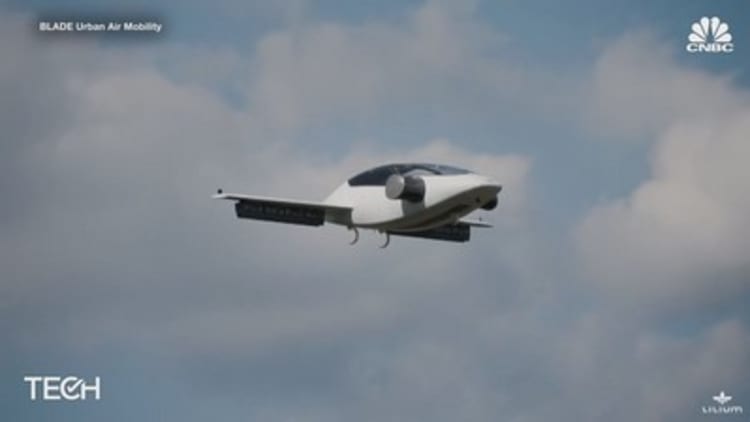 watch now
VIDEO1:4201:42
Blade CEO says electric vertical aircrafts are coming to a sky near you in 2024
TechCheck

"We're really excited to partner with [Blade] because they have the most operational real experience and can talk credibly about the opportunities and the benefits of flying aircraft in and out of cities," Beta founder Kyle Clark told CNBC.

Blade gets the "opportunity to do flight paths that they presently are not doing with the capabilities of this aircraft," Clark added. "The EVA is really going to shine in complement to their existing helicopter fleet."

New York-based Blade, which agreed to purchase five EVAs from Beta with an option to buy 15 more, provides helicopter and executive jet flights focused on New York City, Los Angeles, South Florida as well as other urban and tourist destinations.

Blade was founded in 2014 with the goal of acquiring EVAs to provide transportation services that are cost effective and carbon neutral. The air mobility provider said it has 200,000 users and transported 40,000 passengers in 2019 before the Covid pandemic. Blade is set to go public through a merger with Experience Investment Corp., a special purpose acquisition company, in a deal that closes on May 5.

"It increases our addressable market because most of the places we land, the airports are over 100 years old and the heliports over 35 years old. What's holding us back from building new infrastructure or buying infrastructure is noise," said Wiesenthal. "Communities don't want noisy airports and heliports around. This solves that issue. You will be able to show stakeholders such as community boards,  local legislators and the general public this technology is safe, quiet and zero emissions. That's how you start the conversation about building new infrastructure."

Tuesday's deal makes Blade the fourth customer for Beta. In addition to UPS, the company's first customer, United Therapeutics, plans to use EVAs to transport human organs. The Air Force is also testing Beta's EVAs as part of its Agility Prime program.

Beta's EVA is called the Alia-250 and will be delivered to customers by 2024, pending certification from the Federal Aviation Administration. The aircraft, which is powered by an electric battery, has five propellers, allowing it to take off vertically like a helicopter and then fly like a plane. It can carry 1,400 pounds or six people and can travel up to 250 miles at 170 miles per hour once fully charged. The charging process takes about 50 minutes.

"Electric powered aviation is the future of on-demand organ transportation and, with the ALIA aircraft and charging network, that future is closer than we think," United Therapeutics CEO Dr. Martine Rothblatt said in a press release. Rothblatt is on the Beta board and is the founder of Sirius Satellite Radio, which later merged with competitor XM to form Sirius XM.

Wall Street research firm Wedbush estimates $300 billion will be spent on EVAs by 2028. The EVA industry is becoming increasingly competitive with Joby, Archer, Wisk and others competing to develop the emerging technology.