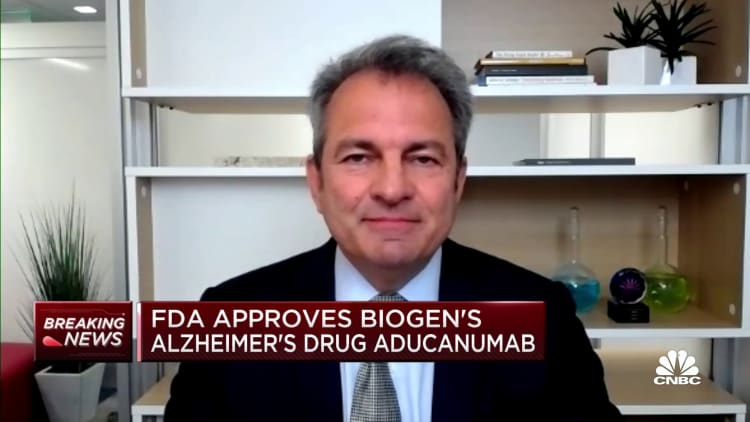 Biogen CEO Michel Vounatsos told CNBC on Monday that the list price of $56,000 per year for the company's FDA-approved Alzheimer's disease drug aducanumab is "fair."

That being said, the Massachusetts-based biotech company has vowed to not increase the price of the medication, which is marketed under the name Aduhelm, for the next four years, Vounatsos said.

The price of the drug is a reflection of "two decades of no innovation" and will also allow Biogen to further invest in its pipeline of medicines for other diseases, he said during an interview with CNBC's "Power Lunch." He added the company is working closely with federal health insurance program Medicare as well as private insurers.

Shares of Biogen surged as high as 60% on Monday after the Food and Drug Administration announced it had approved the company's drug for the disease. It is the first medication cleared by U.S. regulators to slow cognitive decline in people living with Alzheimer's and the first new medicine for the disease in nearly two decades.

Alzheimer's disease is a progressive neurodegenerative disorder that slowly destroys memory and thinking skills. More than 6 million Americans are living with it, according to estimates by the Alzheimer's Association. By 2050, that number is projected to rise to nearly 13 million, according to the group. 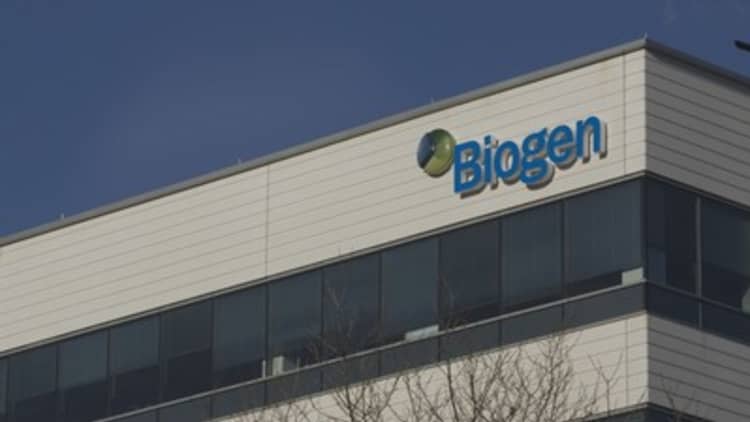 The FDA's decision was highly anticipated. The drug is also expected to generate billions of dollars in revenue for the company and offers new hope to friends and families of patients living with the disease.

Biogen said Monday that aducanumab's list price is $56,000 per year, which was higher than the $10,000 to $25,000 price some analysts were expecting. The out-of-pocket cost for patients will depend on their health coverage.

When asked whether the company expected pushback from patients' on the price, Vounatsos noted that the disease and other forms of dementia cost the U.S. over $600 billion annually and cost patients $500,000 per year.

It is time to "invest" in treatment, he added.